“We need priests. So pray.” 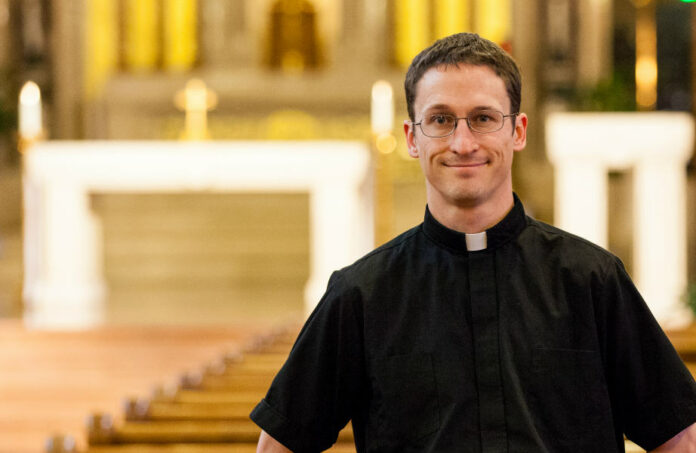 The Archdiocese of Denver needs more priests, and we can all help in the work of vocational recruitment with our prayers, says the incoming vocations director, Father Ryan O’Neill.

Before taking his new post, Father O’Neill said his predecessor, Father Jim Crisman, gave him some parting words of advice: “[He] has really hammered this into me … prayer, prayer, prayer is the only thing that can help our vocational situation in the archdiocese.”

The new vocations director urged the entire archdiocese to pray, because without priests there is no Eucharist: “If you’re reading this, put down the paper and say a brief prayer…. We need priests. So pray.”

“His prayerfulness, his optimism, and his energetic personality will assist him greatly as he enters vocations ministry.”

The new vocations director told the Denver Catholic that he can’t wait to get started.

Father O’Neill said he wants the high-school and college-aged young men of the archdiocese to be willing to honestly ask God what he wants from them. This does not mean that all will be called to be priests, but he wants to see them be willing to make a commitment.

“To be a real man is to come to the realization that your life is not about you,” he said. “Men want to make a difference in the world, but you can’t leave a mark if you aren’t committed to something. There’s no fruitfulness without commitment.”

“It’s not that you have to be strong or handsome or even the most organized leader. It’s about leading people in following the Lord by denying yourself,” he said.

Father O’Neill said that as vocations director, he sees his primary role as being that of a big brother, walking with the men discerning.

“Young men will contact me. Then they come and we talk and I get to know them and where they are in their spiritual life, in life in general and in their discernment. Then I give them tools for whatever area in life they need to work on,” he said.

Those tools can include books, help with logistics, walking through the application process or even tips on how to pray.

Father Ryan said that the relationship will continue if and when the men are accepted to seminary.

“I’m not a formator, but more of an older brother to the guys who are on the way to ordination,” he said. “I love working with the young men in seminary. I’m not that far removed from them, so there’s a kinship.”

Father O’Neill’s own experience of applying to seminary was a whirlwind. He said it began shortly after his 21st birthday.

“I just had this profound religious experience of seeing my life flash before my eyes. I saw myself as a priest, and I knew that the Lord Jesus was asking me to be his priest,” he said.

At first, he took his time applying, even stopping to date a girl. Then he realized he wanted to apply, and needed to do so before he left for World Youth Day.

“I prayed to the Blessed Virgin to open doors, or I would go back to school. All the doors opened,” he said.

He said that honest encounters with priests helped him during his time in seminary. He hopes he can be that for the men he works with.

“One thing that really inspired me when I was in seminary was encountering a priest who would be very honest about the struggles of the priesthood,” he said. “They would share how they were praying, how God was present at a deeper level in their hearts. It always inspired me to be a priest. It never terrified me. It was put into a context of hope, of cooperation with the grace of the ordination. I want to impart that with my own limited priestly experience to these guys.”