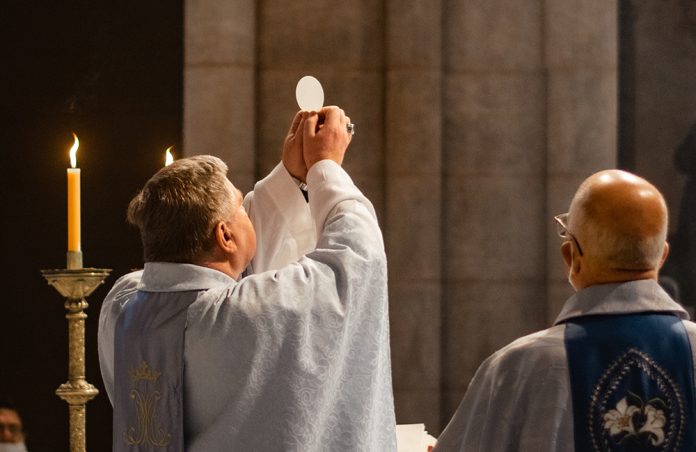 What exactly is a Eucharistic Congress?

Tim Glemkowski: A Eucharistic Congress at its heart is a public gathering of the entire church to bear witness to the fact that the Real Presence of Jesus Christ is the source and summit of our faith. It’s supposed to be a powerful public display of devotion and unity. An international Eucharistic Congress is held every four years, and they’re large events. We used to do them in the United States. A million people or more would gather around Jesus in the Eucharist. And I think uniquely for our time and for this 2024 National Eucharistic Congress, we live in this missionary moment of the Church, this apostolic moment. So, it has to be a unique and powerful public display of devotion and unity, but also a uniquely evangelistic moment to encounter Jesus personally and be sent on mission for the life of the world.

What would you describe as the goal of a Eucharistic Congress?

Tim Glemkowski: The overall goal of a Eucharistic Congress, whether it’s international or national, is to be a powerful, visible display of the communion of the Church. It’s supposed to be this uniquely unifying moment for all the Church — priests, laypeople, religious, old and young — everybody gathered around the one unifying thing. That is a huge goal of this National Eucharistic revival, that it would be a unifying moment for the Church in the United States and a healing moment for the Church in the United States. What’s important, though, is that communion in Jesus with each other and with God always eventually leads us on mission. The three fundamental orientations of Jesus’s life were upward toward the Father, inward in communion with the apostles, and then outward on mission. That’s how he lived his life. And I think sometimes the Church has often missed that third orientation. But as we move from a Christendom to an apostolic context, we need to be sure that this isn’t just about a gathering of the faithful and a display of the visible communion of the church, as powerful as that is, but also something that uniquely sends us out on mission for the life of the world. We see this event as a key part of the missionary transformation that’s needed for the Church.

What do you see as the impetus behind having this National Eucharistic Revival and Congress now, at this moment in the history of the American Catholic Church?

Tim Glemkowski: As I talk to Catholics, it almost becomes self-evident to me that the Church is in need of revival right now, and some of that is about the circumstances in the world. The world is hurting. But the Church, who’s been sent to address the hurt of the world, is herself hurting in so many ways. And coming out of COVID and with so much else happening, the moment that the Church and her mission is needed and the moment that the Eucharist is needed has never been clearer. And to me, mission flows from love. If you’ve fallen in love with God, then from that love of God, you’ve fallen in love with your neighbor. There’s two things Jesus gives us: a great commandment and a great commission. The great commandments, love the Lord your God and your neighbor as yourself, and the great commission is to go and make disciples of all nations. And the second depends on the first. We talk in the Church a lot right now about mission, more than we ever have maybe, and different dioceses and parishes and apostolates are all trying to figure out how to unlock that that mission of the Church. How do we propose Jesus Christ to a world and a culture that thinks they know what he has to offer, but they’re not interested? We don’t do that on our own power. God has a plan. God has everything we need. So, we come back and fall more in love with Jesus in the Eucharist and let him fill us up so that we can go out on mission. That’s how I see this.

Many point to St. John Paul II’s visit to Denver for World Youth Day in 1993 as a launching point for the new evangelization in the United States. Do you see this National Eucharistic Congress as having the potential to make a similar impact on the U.S. Church?

Tim Glemkowski: World Youth Day in Denver left a crater like impact in the Archdiocese of Denver and in the Church as a whole, and in many ways, it has made Denver one of the shining lights of the work of the new evangelization. The impact of that event was about so much more than just those days in 1993. In the same way, this three-year revival and all the local initiatives that are going to happen here in Denver and in other dioceses around the country, all of which will lead to this climactic moment in Indianapolis in 2024, I really think it’s going to have a similar impact in the Church. I think it’s going to be a deepening of that mission. We’re looking at a moment now where God is saying to his Church, I want to take you even deeper, and what I did back then in 1993, in a way that really changed the local Church and candidly, the Church around the world in some ways, I think Indianapolis and this whole revival is going to be a similar thing.

Why is it so important for Catholics to participate in this National Eucharistic Revival?

Tim Glemkowski: God is saying to his church, I want to do something powerfully in you. And the question is, will we respond? John Paul II said, “I see a new missionary age dawning if we as Christians respond with generosity to the challenge of our times.” And that’s a big “if.” It’s not a given that a new springtime of evangelization is coming. Are we going to pray and fast and lay down our lives? That mystery comes back to the exchange of hearts with Jesus in the Eucharist. “You didn’t choose me. I chose you,” he says, “and appointed you to bear fruit that’ll last.” Archbishop Aquila talks all the time about how we have to be rooted in the vine. “Abide in me,” Jesus says, and it’s in that abiding that we learn to be fruitful in mission. Otherwise, we can have amazing strategic plans and programs and events, but if we’re not rooted in the vine, nothing we do will bear fruit. And that’s what this call is, is Jesus saying to the Church, “come back to the vine.”

Can you give us any insight into what the National Eucharistic Congress event itself will look like?

Tim Glemkowski: The scriptural image is the road to Emmaus. They’re walking along, Jesus comes and walks along with them. He proclaims the word. He addresses their questions. And it’s at the breaking of the bread they recognize him, which leads them back on mission to Jerusalem. So for us, we’re going to have the Gospel proclaimed powerfully, the basic story of salvation, the kerygma. We want a night on healing and the healing that the Church needs, people personally, but also communally, the various wounds. We want a night that reflects on the communion of the Church and how it leads us out in solidarity with our brothers and sisters in Christ to address the spiritual and corporeal needs of the world. But all of it leads up to a renewed missionary sending of the Church in the United States on the last day at the closing Mass.

The crux of the Eucharistic Revival centers on having an encounter with Christ in the Eucharist. What would you say to those Catholics who aren’t quite sure what that means or why this encounter is so central to the Catholic faith?

Tim Glemkowski: “Being Christian is not the result of an ethical choice or a lofty ideal, but it’s the fruit of an encounter with a person that gives life a new horizon and decisive direction.” Pope Benedict XVI said that in Deus Caritas Est. There’s so many Catholics who haven’t had that encounter, they don’t know him personally. He’s an idea or a conception or the Catholic faith is a morality or we’re just an intellectual system. Those may all be true, but the core of the Christian faith is about one person: Jesus Christ. We want everyone who comes to Indianapolis to meet a person. Then from that, we want them to go deeper in healing and have those deep places in our hearts brought to the light of Christ and receive the healing only the Eucharist can bring. Then, we want to be sent out on mission for the life of the world.

Any other parting thoughts? We’re hearing rumors of a giant Eucharistic Procession leading up to the Congress…

Tim Glemkowski: It’s not just about gathering people who already get it. It’s bringing those hot coals together in a powerful and life-changing, visible display of the communion of the Church that has a lasting legacy and impact. That’s really the vision behind it. And yes, the rumors are true: another piece of it is we’re in the beginning stages of planning a national Eucharistic Procession that will lead to Indianapolis. We want to process Jesus across the country. There’s more details coming out about that. But a little teaser just to say, we want the pilgrimage aspect of that road to Emmaus imagery to begin even before July 17, 2024, when the Congress opens. We want to bring the entire U.S. Church on pilgrimage, even if they can’t come in person to Indianapolis, through this procession to Indy.