His Church. Our Experience.
Subscribe
HomeOn MissionFocusNarthex laps and cracker crumbs: Dads give tips for surviving Mass with...
On MissionFocus

Narthex laps and cracker crumbs: Dads give tips for surviving Mass with a toddler 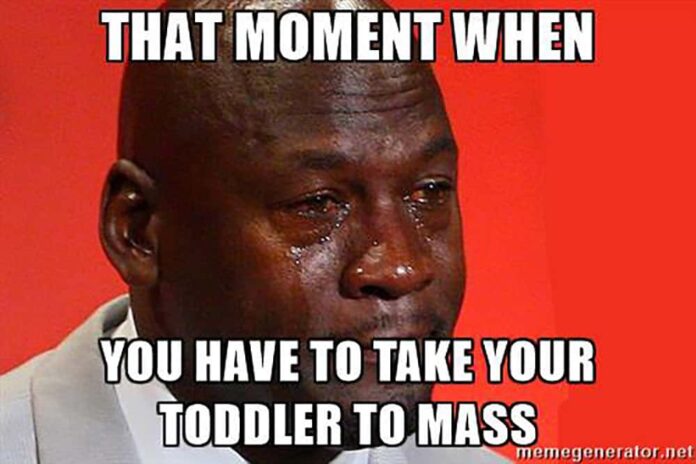 Any parent with a toddler knows how ruthlessly exhausting – yet, infinitely rewarding – parenthood becomes when they get to that point. Speaking from my own experience, my daughter, now two years old, was a breeze when she was younger.

Eat, sleep, poop, repeat; that was her routine up until about a year of age. Then, she started to become more interactive, her wonderfully quirky personality shining through with each passing day. I’m in no way trying to diminish the fact that some parents have tough babies; God bless those of you who do.

However, I think most parents can agree that once that fateful day of crossing the threshold from infant to toddler comes, everything changes. Before, you could leave your child in a room and expect them to be within the same vicinity of where they were when you left. But once they take those first steps, tracking down your child becomes much like a cat chasing after a laser pointer. One minute they’re where you left them, the next they’re hanging from the ceiling fan, getting ready to swing across the living room like Tarzan (metaphorically speaking, of course…or not).

When you get married in the Catholic Church, the priest usually emphasizes, in some form or another, that one of the missions of marriage is to have lots of babies. What he doesn’t warn us about is the chaos that ensues from having lots of children. Joyful chaos, yes, but still chaos nonetheless.

Parishioners need to see young life in the parish and your children are more adorable than distracting to most.”

And then there’s Mass. Call me naive, but when we first had our daughter, I remember looking at all the parents chasing their kids around the church and thinking to myself, “Poor saps. My kids will never behave like that in Mass.”

Oh, how foolish I was.

Getting through Mass with a toddler can be quite a challenge. My wife and I try and fend her off with a snack of some sort for the first half, leaving a mess of crumbs around our pew. And then, right around the Eucharistic Prayer, like clockwork, my daughter begins to squirm like one of those inflatable air dancers. It’s futile to try and fight her, so we end up walking laps around the narthex of our parish until we go up to receive communion…then back to the narthex we go, because there’s no way she’s going to let dad pray in peace, too.

Don’t get me wrong: I love my daughter more than words can convey, and I know that in spite of not being fully engaged in the Mass most weeks, grace abounds. Going to Mass as a family is a huge blessing, but let’s face it: Surviving Mass with a toddler is a skill that takes time to master. I leave it to dads who are far wiser than I to impart some tips for those parents who are struggling.

One common way parents deal with a busy toddler during Mass is with distractions. It’s a natural response: my kid won’t sit still, so I’ll let them stuff their face with a snack, read a book, play with a toy…the list goes on. However, for Immaculate Heart of Mary parishioner Sean McDevitt, he believes keeping a toddler busy during Mass should not be the goal for parents.

“I think us parents need to resist the temptation to ‘keep our kid busy’ in the Mass. If we truly believe the Mass is what it is, then why would I want to draw my child away from that reality in any way,” McDevitt said. “We need to tap into the sense of wonder that’s innate in children.”

McDevitt shares some practical ways to keep toddlers engaged in the Mass. For starters, nix the distractions. If you bring something to distract your kid with, then they’ll inevitably get bored with it, and you’ll have to “up the ante and bring something way cooler.” Also, having distractions oftentimes leads to more distractions – “My boys would always chuck whatever we brought,” McDevitt recalled.

Let him who conquered the world conquer your child.”

If that seems counter-intuitive, just wait until you hear this tip: Sit in the front. This can be terrifying, especially for a parent whose child has more energy than a wind turbine, but the idea is to immerse your child in the Mass and engage their senses.

“Your toddler will have a front row seat to see everything, and there is so much going on sensory-wise with the Mass that your toddler will be mesmerized,” McDevitt said. “Another way to put this is there will be nothing between your child and our Lord. Let him who conquered the world conquer your child.”

Michael Lynch, a parishioner at St. Peter’s Parish in Greeley, concurs with this advice. He also said that if your toddler begins giving you a hard time, don’t be afraid to go to the back of the church, and resist the temptation to immediately retreat to the cry room (if your parish has one).

“I find that merely walking to the back of the church is enough a distraction to cease any misbehavior,” Lynch said. “Parishioners need to see young life in the parish and your children are more adorable than distracting to most.”

Lynch speaks into another important point: Though rare, most parents have heard that person say something rude under their breath after Mass about how the Church has become a playground, or something to that effect. Let it roll, Lynch said.

“Ignore the ones who make rude comments at the end and the enjoy the compliments from most.”

Another way to help with general Mass behavior is to explain the Mass to your children as it’s happening. Adam Pippin and his family attend St. Mary of Littleton Parish, and one thing that really helped him was reading The Lamb’s Supper by Scott Hahn. Not only did it give him the grounds to explain the Mass to his children more effectively, he learned a lot, too.

“Children have a vivid imagination and when we talk to them, they open their hearts and minds to the wonder and awe of the Mass,” Pippin said. “Consequently, the adults will gain more out of the Mass as they explain the awesomeness of the Eucharist, the readings, the priests, the tabernacle, the altar, etc.”

Going to daily Mass is also a great way to improve overall Mass behavior for your toddler. Another piece of practical advice is to talk about the Mass outside of Mass. It’s adorable when little kids play Mass at home, but aside from just being a good extracurricular activity, doing so actually instills a deeper sense of what the Mass is for children. It should come as no surprise that the Mass tends to make a profound impact on children, even if you think they’re not paying attention; after all, the Lord is made present at Mass, and kids are much better than adults at sensing his presence.

Most importantly, take heart. Raising children is a difficult endeavor, but never forget that parents are the first teachers of their kids. Fight the urge to skip Mass because it’s tough. Don’t sit in the back anymore; move all the way to the front. Don’t allow the enemy to creep into the way you parent your kids. There truly is nothing more important.

“Anytime we think it would be better for us to withdraw or retreat from that which is good and holy, it’s probably not the Lord telling us that,” McDevitt said.