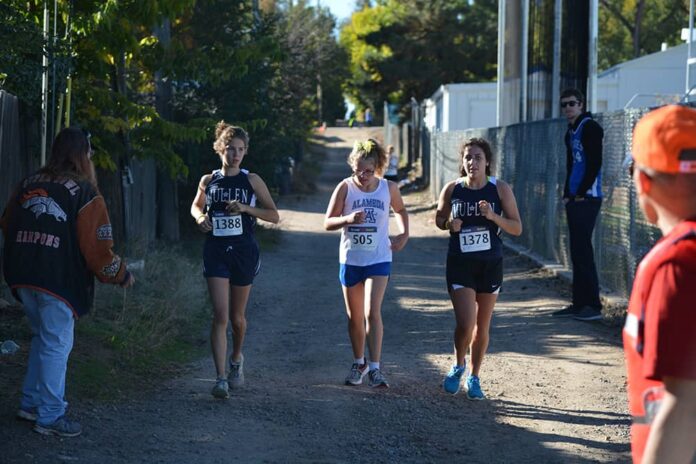 They could have run away, but Adele Cardenas and Emma Hahn chose to literally run into the situation.

The Mullen juniors were participating in the Arvada West Invitational, a regular stop on the cross-country circuit that was contested at the Lutz Complex on Sept. 15, when they spotted a runner from Alameda International who obviously was having extreme difficulty about a half-mile into the junior-varsity race.

Fittingly, her name was Destiny Case.

“We were running and we saw that she was behind and she seemed upset and was struggling,” Cardenas said. “We just decided that if that was us, we would want someone to cheer us on and run with us.”

“Adele and I just joined cross country not in it to win it, but to just do it for fun and we thought this is what cross country is all about, meeting new people and making friends,” Hahn added. “And we definitely were not going to win that race.”

So they stayed with Case, encouraged her, wouldn’t let her slow down to a walk, which she was prone to do, and finished the 3.1-mile (5K) together in a very high 35 minutes, 5 seconds – more than 14 minutes behind the winner – for places 236th-238th. But this had nothing to do with numbers.

“Those girls have been so spectacular with my daughter,” said Heidi Case, Destiny’s mother, who admitted to tears when she saw the three of them together.

Destiny Case, a freshman, is new to high-school sports and suffers from ADHD (Attention Deficit Hyperactivity Disorder) as well as Asperger’s Disorder, a severe form of autism. But since the special-needs student with the genuine smile met Cardenas and Hahn, they are just three high-school girls who are becoming fast friends.

“After the race, we finished and she was exhausted, and we were pushing her again to go to the tent,” Cardenas said of Case. “We hugged, talked with her and met her mom … it was fun.”

Hahn admitted “that while we were running, she probably hated us for pushing her, but at the end she started to cry and gave us a hug, and thanked us.”

Destiny has to be reminded about the first names of Cardenas and Hahn “because I sometimes forget them, but they didn’t let me walk at all and encouraged me to keep running, stuff like that. And they gave me compliments.”

Having finished last and seriously considering quitting the team, Destiny has since changed her mind thanks to Cardenas and Hahn, and her mom is beside herself with glee.

Speaking about her daughter and of others like her, “emotionally, they hate themselves and think they can’t do anything right … a lot of it is mental,” she said.

But what really gets to her, she said, is that Cardenas and Hahn “went beyond sportsmanship. They could have [beaten] her down and had a really good time. But they chose to help somebody else.”

The kind act probably would have been enough to stand alone as well as be retold for years to come; however, the opportunity arose again the past weekend at Englewood’s Windjammer Invitational. Yes, Cardenas and Hahn were there as was Case. Only this time the three met up before the race and decided to do it again.

“We saw her walking and when she saw us she started laughing,” Cardenas said.

“[Case] was surprised. She saw us and we came up to say ‘Hi’ and we just ran with her again.”

But in terms of companionship, compassion and understanding, Cardenas and Hahn – as well as Case — probably won by light years.

Alameda International coach Jon Turner said what Cardenas and Hahn “did was special … they sacrificed for another.”

Mullen Mustangs cross country head coach Joe Welling said “well, I told this to the team after the first time that, to me, this is more important than a state championship. What that is is a Lasallian core principal of inclusive community in action. That’s what we want our kids to take away from cross country and that’s what they demonstrated in real life.”

Janell Kloosterman, Mullen Principal and Chief Academic Officer, concurred: “For Emma and Adele, providing support for Destiny transcended winning. At that moment, the race became about running in solidarity with another human being who was in need and just simply needed their support.  Emma and Adele exemplify what it means to be a Mullen High School student-athlete — treating others with respect and dignity. They make us proud to be Mullen Mustangs.”

Mullen has received numerous positive e-mails, mostly sparked by Turner, and one of the best things about all of it, he said, is Destiny has vowed to continue with cross country. She also hungers to try basketball and soccer with the Pirates, but for someone who felt inadequate with her peers, she is brimming with confidence.

“I think she’ll stick with it,” Turner said.

Heidi Case says her daughter “is taking it day-by-day and she keeps telling me the Mullen girls inspired her. And she said to me, ‘You know, Mom, I didn’t give up.’”

Plus, Turner said, “you can see the social change in her.”

For their part, Cardenas and Hahn wave off any praise, although Heidi Case says she just about melts when they refer to Destiny as their hero. “But I think they’re all heroes,” she said.

Hahn insists “we just wanted to help her run. We didn’t do it to get recognized for it.”

And Cardenas didn’t hesitate on her response.

“Yeah, I mean, we didn’t think much of it,” she said. “We just saw someone struggling and wanted to help her out … after the race she was hugging us. It shows how grateful you can be for the ability you have when you see someone like her, super-inspiring and she was so overjoyed. And, yeah, I’d definitely do it again.”

Destiny Case said she’ll be thinking of Cardenas and Hahn.

“I have one of their phone numbers and I want to get the other one,” she said.