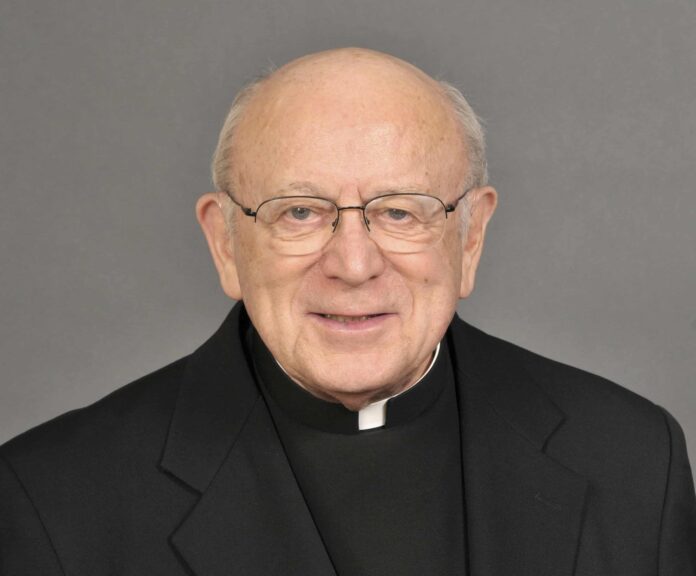 The longtime Denver resident was born one of seven children on Nov. 20, 1934, in Shenandoah, Iowa, to Edward and Evelyn Horrigan. When he was just three years old, his family moved to Denver.

He attended grade school at St. John the Evangelist Catholic School in Denver and graduated from St. Francis de Sales High School in Denver in 1952. He attended Regis College from 1952-1953 and St. Thomas Seminary in Denver from 1953-1956. He was ordained on Dec. 20, 1959, in Rome by Archbishop M. O’Connor, and went on to receive his S.T.L. from the Pontifical Gregorian University in Rome in 1960 and an M.A. from the Catholic University of America in 1966. He was appointed a Prelate of Honor by Pope St. John Paul II on Sept. 25, 2000.

Some of Msgr. Horrigan’s assignments include pastor at St. Philomena Parish, Blessed Sacrament Parish, where he served for 13 years, and Notre Dame Parish in Denver, where he served for four terms. He also served as the Archdiocesan Scout Chaplain and as the ordinary confessor of the Franciscan Motherhouse in Coloorado Springs.

He also served in various Archdiocesan positions including Vicar for Clergy. He was the first to have the position in the diocese, under Archbishop James V. Casey. He retired June 11, 2010.

“I knew him to be incredibly knowledgeable and a very good pastor. He was at the Cathedral while I was a seminarian,” Father Fisher said. “He was a tremendous guy, incredibly faithful. Those that I know who had him as a pastor absolutely loved him.”

Msgr. Thomas Fryar, current pastor at St. Thomas More Parish, also served as Vicar for Clergy and explained how the position is a difficult but rewarding one, and that Msgr. Horrigan is remembered as a good pastor because of his experience with that role.

“He was the first one in that role under Archbishop Casey. He helped overseeing priests and their roles in their parishes, and he did it in a very humble way,” Msgr. Fryar said.

“One thing I’m very aware of is that he had such a profound impact on people that they still remembered him even now. You enter the lives of people and you have no idea how it will touch people in later years [as a priest],” he said. “He was a gentle, loving and faith-filled presence in the community.

“Even in retirement and infirmity, he helped bring the sacraments to people. He was always wanting to be available to share the grace of God with others. He’s a man I really looked up to.”