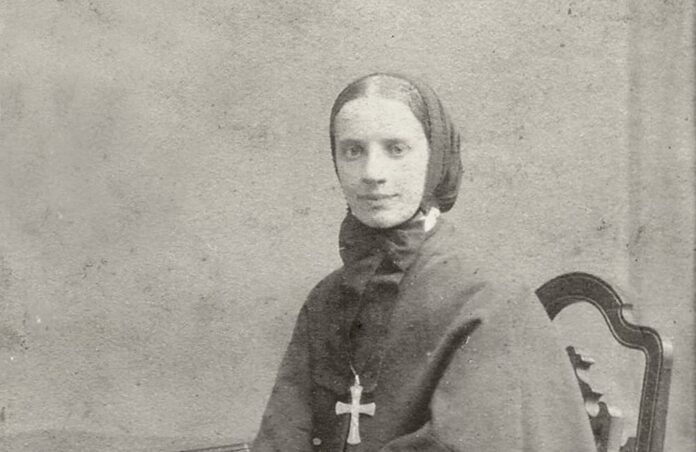 St. Frances Xavier Cabrini is a beacon of hope and life, the general superior of the order founded by the saint, the Missionary Sisters of the Sacred Heart of Jesus, wrote Tuesday to mark the 75th anniversary of the foundress’ canonization.

Saint, lover of Christ, businesswomen, entrepreneur, advocate for the vulnerable, audacious, servant, educator, hard worker, mother… St. Frances Xavier Cabrini, lived prophetically, a woman beyond her time, human and humanizing, and until today a beacon of hope and life.  She gave her all to bring the love of Christ to the ends of the earth,” Sister Barbara Staley wrote July 6 to the members of the order.

“Mother Cabrini continually shows us that as we lay down our lives, so we truly can do all things through Christ who strengthens us. In her words: ‘God has done it all, I have only been a spectator of God’s work.’”

In his homily at the canonization, Venerable Pius XII described Cabrini’s life as “an admirable epic of struggles and spiritual victories.”

“We see her, this heroine of modern times, appearing in our midst, rising like a star from a humble town in Lombardy, rising in her light and crossing the oceans, spreading the warmth of her rays everywhere, and arousing around her the wonder of the peoples,” he said.

An Italian missionary, St. Frances Xavier Cabrini died Dec. 22, 1917, after spending much of her life working with Italian immigrants in the United States.

She spent nearly 30 years traveling back and forth across the Atlantic, as well as around the United States, setting up orphanages, hospitals, convents, and schools for the often marginalized Italian immigrants.

Sr. Barbara wrote that “now more than ever the world needs courageous bearers of God’s love to audaciously and intelligently confront the injustices, ills, and challenges of our time.”

“Thank you to those of you who faithfully continue to provide services despite all the hardships you are facing. Your presence and actions are evidence that love is alive and active. Whether through our sponsored ministries, our emerging ministries, our pastoral care, or our Sisters’ communities, know that as we act locally we should continue to think globally. All of our actions and voices together help advocate for and shape our response to the biggest crises of our times,” she stated.

“Looking forward to the next 75 years and the legacy that we will leave future generations, the Extended Council is actively reviewing our sponsored ministries according to the Chapter Mandates, and in a process about making recommendations for each one. Let us continue to ask Mother Cabrini to pray for us, in our discernment, and daily in all we are asked to do. Pray and act so that we may respond effectively to the most pressing needs of our time. While much has changed in the world the past 75 years, what we hold to is not an object or an organization, but the mission of spreading God’s love to all the ends of the earth,” wrote Sr. Barbara.

In the forward to a 2017 biography of Mother Cabrini, Pope Francis wrote that she combined “great charity with a prophetic spirit,” and “for this reason, is very present today and teaches us the way to deal with the momentous phenomenon of migration by combining charity and justice.”

Not only did she realize that mass migration “was not a temporary phenomenon,” he continued, she also saw “the emergence of a new historical era” in which modern transport would allow easier movement of large populations.

“Frances understood that modernity would be marked by these immense migrations and uprooted human beings, in a crisis of identity, often desperate and lacking resources to face the society in which they would have to enter,” he said.

Francis frequently invokes St. Frances Xavier Cabrini in his speeches for her example of how to welcome and care for migrants while also helping them integrate with the culture of their new country.

In a September 2017 letter to the Missionary Sisters of the Sacred Heart of Jesus, he wrote that “the great migrations underway today need guidance filled with love and intelligence similar to what characterizes the Cabrinian charism. In this way the meeting of peoples will enrich all and generate union and dialogue, not separation and hostility.”

Mother Cabrini’s charism gave her the strength to devote herself to Italian immigrants, particularly orphans and miners, the Pope stated, and always in cooperation with the local authorities.

She helped them to fully integrate with the culture of their new countries, accompanying the Italian immigrants in becoming “fully Italian and fully American.” At the same time she worked to preserve and revive within them the Christian tradition of their country of origin, Francis pointed out.

Her “clearly feminine, missionary consecration” came from her “total and loving union with the Heart of Christ whose compassion surpasses all limits.”

“She lived and instilled in her sisters the impelling desire of reparation for the ills of the world and to overcome separation from Christ, an impetus that sustained the missionary in tasks beyond human strength.”