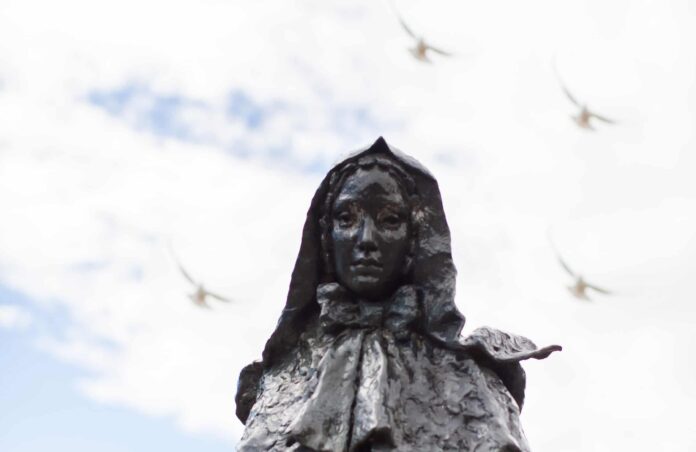 Driving out of the mountains on I-70, it’s hard not to spot: A statue of Jesus overlooking the corridor, signaling a warm welcome back to the city after a long weekend away.

Mother Cabrini Shrine has become something of a landmark for Coloradans; a silent refuge just outside of the city for the weary, the overburdened and the distracted to come and find a little bit of peace and quiet. What the many who visit may not know, however, is the rich history of the land and its founder — a saint from whom the haven takes its namesake.

In July of 2017 the Shrine marked 100 years since the death of Mother Frances Xavier Cabrini with a weekend-long celebration of her life and achievements.

Mother Cabrini was a simple Italian woman who made an impressionable mark on American Catholic spirituality and was responsible for founding 67 different institutions in the U.S., including schools, hospitals and orphanages. Mother Cabrini Shrine can be counted among these, though it didn’t begin as the shrine it is today.

Frances Cabrini was born July 15, 1850, in the small village of S’ant Angelo Lodgiano, Italy, just outside of Milan. The youngest of 13 children, she was born two months premature, and would live her life in a fragile and delicate state of health. Despite her condition, it didn’t stop her from joining a religious order when she was of age.

In 1880, Cabrini founded the Missionary Sisters of the Sacred Heart of Jesus. The dream for her and her sisters was to go and do missionary work in China, and was granted an audience with Pope Leo XIII to gain permission to do so. Much to her surprise, he told her not to go east, but to the west — namely, the United States. Italian immigrants were flooding the country at the time, and the Pope thought her talents would be best utilized serving them instead. He was right.

She arrived to New York City in 1889. It was difficult at first, but she founded an orphanage in what is now West Park, New York, known as Saint Cabrini Home. She eventually found her way to Colorado in 1902, where she would visit several times in the remaining years of her life. She ministered to the poor Italian mining workers and their families in the foothills west of Denver, an area she was particularly fond of.

Having already established Queen of Heaven Girls Orphanage in Denver, Mother Cabrini was in need of a summer camp to bring the girls during the summer months. She discovered some property on the east slope of Lookout Mountain, owned by the town of Golden, and negotiated its purchase in 1910, after taking her oath as a U.S. citizen the year prior. Three Sisters of the Sacred Heart lived on and maintained the land, which had a small farming operation.

The land had no known reliable source of water, but as the story goes, in September 1912, Mother Cabrini told some of the thirsty, complaining sisters to lift a certain rock and start digging. The sisters obliged, and uncovered a spring, which has not stopped running to this day. Many pilgrims to Mother Cabrini Shrine believe the water has brought about healing and peace in their lives.

It was also in 1912, during her final visit to Colorado, that she and builder Thomas Eckrom would draw up the plans for what would become the famous Stone House that stands today. Construction began in fall of that year and was finished in 1914. Girls from the orphanage would stay in the house during the summer camp. Also during her last visit, Mother Cabrini took a few sisters and girls from the orphanage to the top of the highest hill on the property and arranged stones in the shape of the Sacred Heart. She dedicated the hill to the Sacred Heart and named it “Mount of the Sacred Heart,” and to this day, those very stones lay arranged just as they were, preserved beneath a glass case for all to see.

Mother Cabrini died on Dec. 22, 1917, in Chicago. The cause for her beatification, and her subsequent canonization into sainthood was opened shortly after her death. She was canonized on July 7, 1946 by Pope Pius XII. A July 4, 1946, article in the Denver Catholic Register chronicled Mother Cabrini’s travels during her life, and concluded that she founded an “average of one house for each of her 67 years of life.”

And so, St. Frances Cabrini’s legacy lives on at Mother Cabrini Shrine. Various additions have been made over the years that have turned it into the shrine it is today, all of which likely capture the spirit Mother Cabrini intended for the land when she acquired it. A replica of a grotto at Lourdes was made in 1929 and then rebuilt in 1959, which has become a frequented place of prayer for the faithful of Denver.

In 1954, the statue of Jesus that overlooks I-70 was installed above the heart of stones, and a 373-step staircase leading up to the Mount of the Sacred Heart was also built, which has come to be known as the Stairway of Prayer. In 1970, a convent for the Sisters of the Sacred Heart was completed, which, among other things, provides overnight accommodations for visitors, making Mother Cabrini Shrine a popular spot for retreats, as well.

St. Frances Cabrini may be 100 years gone, but her spirit is very much alive in the streets of Denver, and especially at Mother Cabrini Shrine. If anything, it’s an ever-present reminder of the Christ-like love that this simple woman poured into our great state – a love that made her a saint.