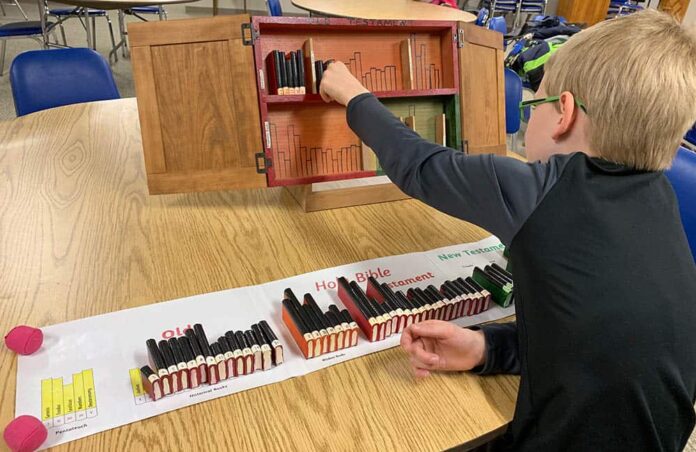 Jesus said, “Let the little children come to me,” and a religious education method used in a growing number of Denver’s Catholic schools and parishes seeks to help kids do just that.

Catechesis of the Good Shepherd (CGS) is a religious education method centered around the parable of the Good Shepherd and based largely on the Montessori method of education. Through interactive lessons and hands-on experiences, children learn about God and faith in a way that is experiential, tangible and developmentally appropriate.

Faith is something that can be taught only to a degree. For it to truly be instilled into one’s soul, the person must come to it on their own, and that is ultimately through a relationship with Jesus. In essence, this is what CGS aims to do for the child.

“The goal behind it comes from this desire to really instill the faith in the children and not just teach them the Ten Commandments, not just have them memorize the prayers, but [to help them] love the faith and be alive in the faith,” said Audrey Nord, a preschool teacher at St. Rose of Lima Catholic School in Denver. “[The hope is that] when they get older, they have this relationship, this connection built so they don’t just lose it. It’s not their parents’ faith, it’s theirs. It really empowers the kids.”

Nord previously taught CGS at Frassati Catholic Academy. Only a handful of local schools use the program for religious education, but it is slowly growing in popularity. Instructors don’t like to think of themselves as teachers, but rather as catechists who act as facilitators of a relationship between God and the children.

“We’re not teachers. We are catechists who echo down what has been handed on to us,” said Jo Ann Padgett, director and trainer of Catechesis of the Good Shepherd at Sacred Heart of Mary Parish in Boulder. “We are announcing the good news to a child who is already primed for God.”

Padgett has been involved in CGS for 32 years and has been a nationally recognized trainer and formator for adults in the method for 17 years.

“I first encountered [CGS] when a friend of mine had gone off and taken an early course and came back and showed us the baptism presentation that we give to three to six year olds,” Padgett recalled. “And it was really quite an experience for all of us. Even though I could tell you what baptism was, it’s like the presentation bypassed my brain and went straight to my soul. And I understood it at a level that I could hardly even articulate.”

The curriculum is divided into three levels, and each level differs in tasks and instruction according to the developmental needs of the child. Level one is for ages three to six, level two for ages six to nine, and level three for ages nine to 12. A dedicated space called the Atrium is where Catechesis of the Good Shepherd takes place, and the children are encouraged to explore the various areas on their own, which contain a mix of practical skills, a main& focus of level one, as well as religious formation.

“[What] I really appreciate about our approach is it’s not just a random volunteer who you give a book to and say, ‘study this’ and they look at it a few minutes Saturday night so they can give the lesson,” Padgett said. “It’s a real committed personal development of the catechist’s faith.”

Children bring a beautiful perspective and understanding of faith with their experience of it. In the Gospel of Matthew, Jesus tells his disciples, “Amen, I say to you, unless you turn and become like children, you will not enter the kingdom of heaven.” Having childlike faith is essential to the Christian life, and this philosophy lies at the core of CGS.

“We cannot teach a child how to love God. You can’t do that. It’s the Holy Spirit that teaches the child,” Padgett explained. “The Holy Spirit, Jesus is the teacher. God is the teacher. What we do is we make the announcement and then we have all these materials and we orient them to the material and then we leave them alone to work. And it is in their personal work that the encounter really happens.”

Catechesis of the Good Shepherd relies on Maria Montessori’s understanding of human development and the methodology of understanding who we are at the different ages to achieve its goals. While the Montessori method has been repurposed to varying degrees for secular educational environments, Montessori herself was a devout Catholic and was once quoted as saying “I believe my work will find its ultimate fulfillment in the religious realm.”

If human beings were made for relationship, and ultimately relationship with God, then CGS is simply tapping into what’s already innate in each child and helping them come to a fuller and deeper understanding of God’s love for them as the Good Shepherd.

“That’s why I think [CGS] is so beautiful,” Nord concluded. “It presents the children with something that’s true and beautiful and simple, but rich and you know they can understand it. Once you set that expectation, they always meet it, maybe in their own time, but eventually they all come to understand it.”

To learn more about Catechesis of the Good Shepherd, visit cgsusa.org.