His Church. Our Experience.
Subscribe
HomeLocalMonsignor Michael Glenn remained a ‘priest to the end’ in battle with...
LocalObituaries 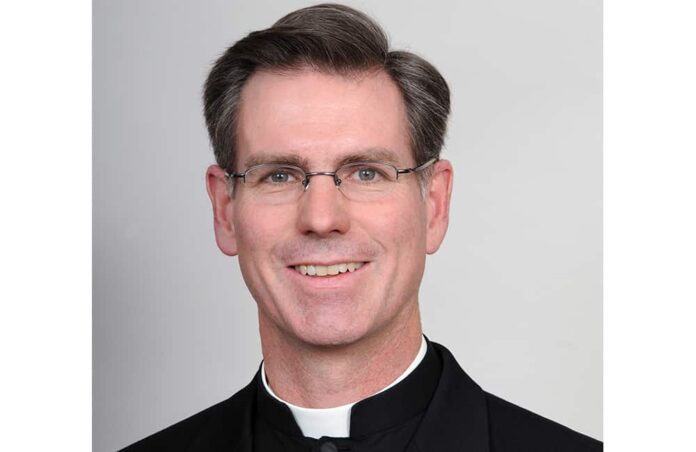 Monsignor Michael Glenn, former rector of St. John Vianney Theological Seminary and beloved pastor of three parishes on the western slope, died Friday, March 1, after being diagnosed with brain cancer in 2016. He was 56 years old.

Michael Glenn was born Nov. 15, 1962 in Denver to Patrick and Frances Glenn.  He is survived by two brothers, Sean and Timothy. He was a native of Broomfield and graduated from Broomfield High School in 1981.

He attended the University of Colorado Boulder and West Point U.S. Military Academy before earning a Bachelor of Theology from Franciscan University of Steubenville in Ohio in 1985. He then earned a baccalaureate in sacred theology from Pontifical Gregorian University in Rome in 1989.

His studies for the priesthood began at Conception Seminary College in Missouri in 1985 and continued at North American College in Rome, alongside his academic studies at Pontifical Gregorian University. On June 30, 1990, Glenn was ordained a priest by then-Archbishop J. Francis Stafford.

After serving as parochical vicar at Spirit of Christ Parish in Arvada, pastor of St. Mary’s Parish in Aspen, and various archdiocesan positions, including vice chancellor and director of vocations, Father Glenn was appointed rector of the newly-constituted St. John Vianney Theological Seminary in 2001, which replaced the former St. Thomas Seminary. Father Glenn succeeded then-Father Samuel Aquila, now archbishop of Denver, as rector and served there for 12 years alongside then-Father Jorge Rodriguez, now auxiliary bishop of Denver, who served as his vice rector for a time.

On July 7, 2009, Father Glenn was granted the title of Monsignor by Pope Benedict XVI.

Many priests of the Archdiocese of Denver have fond memories of attending seminary while Msgr. Glenn was rector, including current director of vocations Father Ryan O’Neill.

“When I was in seminary, Msgr. Glenn was my rector the whole time there, for all seven years,” Father O’Neill told the Denver Catholic. “He was very present, very available. … He knew who I was and what I needed to work on, he had this fatherly awareness of how to challenge me and help me be a better priest, a better seminarian.”

Father Jim Thermos, Director of spirituality year and formator at St. John Vianney seminary, has known Msgr. Glenn for over 20 years. He, too, was in seminary while Msgr. Glenn was rector and ended up working side-by-side there with him shortly after his ordination.

“[He was] one who [was] in love with Jesus and scripture. That’s what made me trust him initially and want to entrust myself over to him,” Father Thermos said of Msgr. Glenn. “I consider him a man of humility and one of friendship. He offered both to me.

“In my mind, we’ve been through so many times together. He was on the cross in the last few weeks … he was entrusting himself and offering his suffering for the seminary and holy priests, he was so vulnerable. I was able to witness a holy death, I believe. I’m grateful for his example.”

In Msgr. Glenn’s funeral Mass, celebrated March 7 and presided by Cardinal J. Francis Stafford, Bishop Jorge Rodriguez referred to the Gospel message present in the life of his “friend and brother.”

“I am convinced that Father Michael was born to be a priest… [The] great good news [is that] God will always send us these kind of priests, as he sent Father Michael, his priest, to live and to serve you, as a friend, as a brother, as a minister,” Bishop Rodriguez said.

“He probably wasn’t aware that the broken body holding in his hands would be his broken body with Jesus, for the salvation of the world… This is the deep mystery of the life of the priest that, identified with Jesus Christ, falls to the ground and dies… [Msgr. Glenn] loved his priesthood, [and] he was a priest to the end.”

Msgr. Glenn was an avid outdoorsman, and upon learning of his brain cancer diagnosis in 2016, many began offering intercessory prayers to Blessed Pier Giorgio Frassati for healing. Msgr. Glenn kept a framed photo of Frassati in his office at Our Lady of Peace Parish in Silverthorne, which was given to him by a member of Frassati’s family during his studies in Italy.

In a 2017 article that appeared in the Summit Daily newspaper, Msgr. Glenn spoke of the blessing of being able to continue chemotherapy and radiation treatments at St. Anthony Summit Medical Center in Frisco instead of in Houston, Texas, where he’d been receiving them for nine months. His parishioners raised $53,000 to contribute to a new addition at the hospital where patients could receive transfusions while looking out at the natural splendor of Lake Dillon and Buffalo Mountain.

“It’s good to be able to look at something while you’re doing it,” Msgr. Glenn told the Summit Daily. “Summit [County] is beautiful — but heaven is going to be a lot better.”