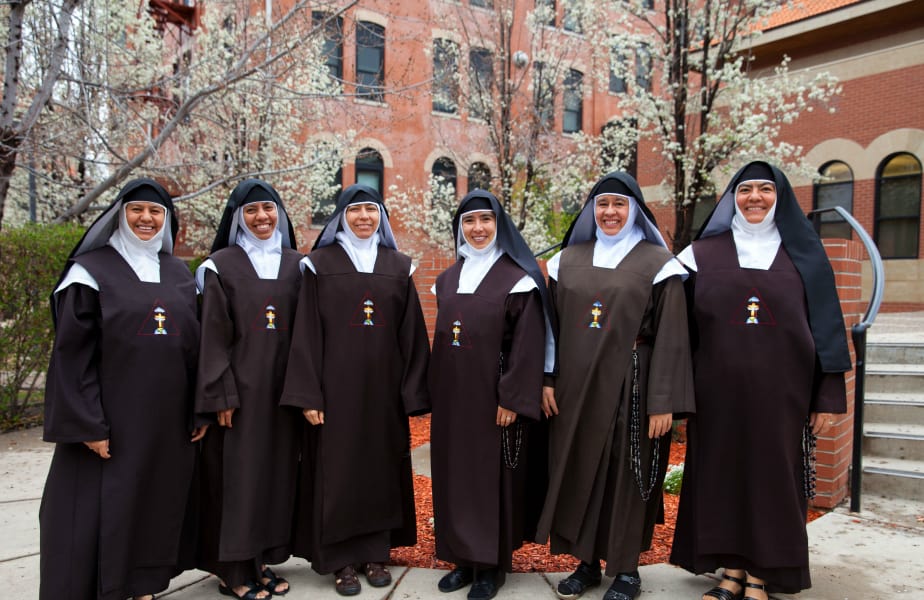 It seems providential that a new order of Discalced Carmelite nuns, whose charism is to know and to make known the glory of the Holy Trinity, has arrived to Denver to care for the archdiocese’s Holy Trinity Center.

The six Allied Discalced Carmelites of the Holy Trinity are the first nuns of their order, which was born in Aguascalientes, Mexico, to open a convent in the United States.

“It is by the grace of God,” Mother Martha Patricia Malacara, superior of the community, told the Denver Catholic. “He is making history (here).

“We want to thank Archbishop Samuel Aquila for welcoming us,” she added, “we are very grateful.”

Founded by Sister Martha Maria Ramirez-Mora on July 16, 1986, the order has 200-plus nuns serving in various apostolates—ranging from assisting at nursing homes to retreat centers—in Mexico, Italy, Rome, Argentina and Chile.

The semi-cloistered nuns are active contemplatives.

“We have the Carmelite essence of contemplative prayer but we also have an apostolate,” Mother Malacara said.

Residing in the convent at the St. John Paul II Center campus, which includes the chancery offices and the archdiocese’s two seminaries, the nuns will help run the day-to-day functions of the Holy Trinity Center, which includes the archbishop’s residence and rooms for large-scale meetings, conferences and events. The nuns will also help maintain the various sacristies on the campus.

The nuns’ primary task, however, is prayer—particularly the Divine Office and daily Eucharistic adoration. They pray especially for the sanctification of priests and seminarians, for the conversion of sinners and for the needs of the Church. They also welcome prayer requests.

“We want to let people know that we are praying for them,” Mother Malacara said. “Prayer is our main charism.”

Ranging in age from 35 to 46, the nuns are all Spanish-speaking natives of Mexico. They arrived to Denver March 14. Serving under Mother Malacara are Sister Imelda Cardona, Sister Lidia Cortez, Sister Elvira Esparza, Sister Maria Patricia Mireles and Sister Laura Martinez-Silvestre.

Clad in sandals, black veils and brown habits, the nuns’ habits are emblazoned with a triangular emblem that represents the Holy Trinity: one God comprised of three persons—the Father, Son and Holy Spirit.

Inside the triangle a cloud signifies the Father’s providence, which floats over his son Jesus’ cross, upon which the Holy Spirit, as a dove, issues tongues of fire for the Spirit’s seven gifts, which descend on a globe.

The nuns’ first impressions of their new land have been of warm hospitality.

“The United States is very beautiful,” Mother Malacara said. “People have welcomed us well. We do not speak English but people have tried to speak to us in Spanish.”

The nuns are learning English, but when language fails, the nuns said laughing, those involved have resorted to friendly gesturing.

“From the first moment we stepped on the land of the United States, very friendly people have helped us and guided us,” said Sister Mireles.

Not only do the nuns welcome prayer requests but women interested in their order are invited to contact them.

“If you feel that call, answer it!” Sister Cardona said, adding that there is no need to be afraid. “God loves you, so you should answer.”

Prayer requests may be emailed to Carmelites@archden.org or mailed to Allied Discalced Carmelites of the Holy Trinity, 1300 S. Steele St., Denver, CO 80210.

COMING UP: From rare books to online resources, archdiocesan library has long history of service to students

National Library Week, observed this year from April 4 to April 10, is the perfect occasion to highlight the essential role of libraries and library staff in strengthening our communities – and our very own Cardinal Stafford Library at the Archdiocese of Denver is no exception.

Since 1932, the library has served as a religious, intellectual, and cultural resource for seminarians and students at St. John Vianney Seminary in Denver.

“As the library of the seminary, we are always responsible for the four dimensions of the priestly formation of our seminarians. The library is charged with being responsible to all the divisions of the Seminary: the Lay Division (Catholic Biblical School and Catholic Catechetical School), the Permanent Deacon Formation Division, and the Priestly Formation Division,” said Stephen Sweeney, Library Director.

In addition to being one of the main resources to the seminary, the Cardinal Stafford Library serves the needs of other educational programs in the Archdiocese of Denver, including the St. Francis School for Deacons, the Biblical School, the Catechetical School and the Augustine Institute. While the library is currently closed to the public due to the COVID-19 pandemic, it was previously open to anyone, giving people access to more than 150,000 books, audios, and videos.

The Cardinal Stafford Library was named after Cardinal J. Francis Stafford, Apostolic Penitentiary at the Vatican and former Archbishop of Denver from 1986 to 1996. He was a dedicated advocate of the library and of Catholic education.

In 1932, the library was established by two seminarians, Maurice Helmann and Barry Wogan. While they were not the first seminarians to conceive the idea of establishing a library, they are considered the founders for undertaking its organization.

Since its founding, the library has grown and compiled a fine collection of resources on Catholic theology, Church history, biblical studies, liturgy, canon law, religious art, philosophy, and literature. Special collections include over 500 rare books dating back to the early 16th century and many periodicals dating back to the 1800s. The oldest publication in the library is a book on excommunication published in 1510. The Cardinal Stafford Library is also home to various relics and holds bills personally written by some of those saints.

Over the past few years, the library has undergone a process of beautification through various renovations that include improvements in lighting, flooring, and even furniture restoration. During these difficult times, libraries are doing their best to adapt to our changing world by expanding their digital resources to reach those who don’t have access to them from home.

“The Cardinal Stafford Library provides a community space; we subscribe to about 200 print journals and have access to literally thousands more through online resources available on campus computers,” Sweeney added. “I have been the Library Director for almost 11 years. I absolutely love my work, especially participating in the intellectual formation of the faithful from all of the dioceses we serve”.

For more information on the Cardinal Stafford Library, visit: sjvdenver.edu/library