On the morning of Sept. 28, some 200 people watched auxiliary Bishop Jorge Rodriguez bless the Colorado Freedom Memorial grounds, the glass wall listing all Coloradans killed in war, and the granite pillars holding soil from foreign cemeteries in which Colorado military are buried.

It was the first Catholic blessing of the six-year-old windswept Aurora site.

“Bless this memorial, O Lord, that it may remind those who visit it that there is no greater love than to lay down one’s life for one’s friend,” Bishop Rodriguez prayed as he sprinkled holy water. “Bless these grounds and make them holy and solemn for all those who gather here.”

Organized by the deacons of the Denver Archdiocese, the blessing preceded a Mass for veterans, their families and friends, and a lunch provided by the Knights of Columbus. Prior to the blessing and during the Mass, the Air Force Academy Catholic Cadet Choir sang patriotic songs and hymns. Rick Crandall, KEZW-AM morning show host and founder of the memorial, served as emcee.

Open to all veterans and named after the U.S. motto, the “In God We Trust” event sought especially to offer outreach to those who may have fallen away from their faith as a result of war-induced trauma. Professionals from Mount Tabor Catholic Counseling were available for attendees to talk to and a priest was on hand to hear confessions. Deacons were available for spiritual counsel.

“It is our deepest desire that when you leave here today you feel this Mass has brought you closer to the Lord,” Crandall told the assembly. 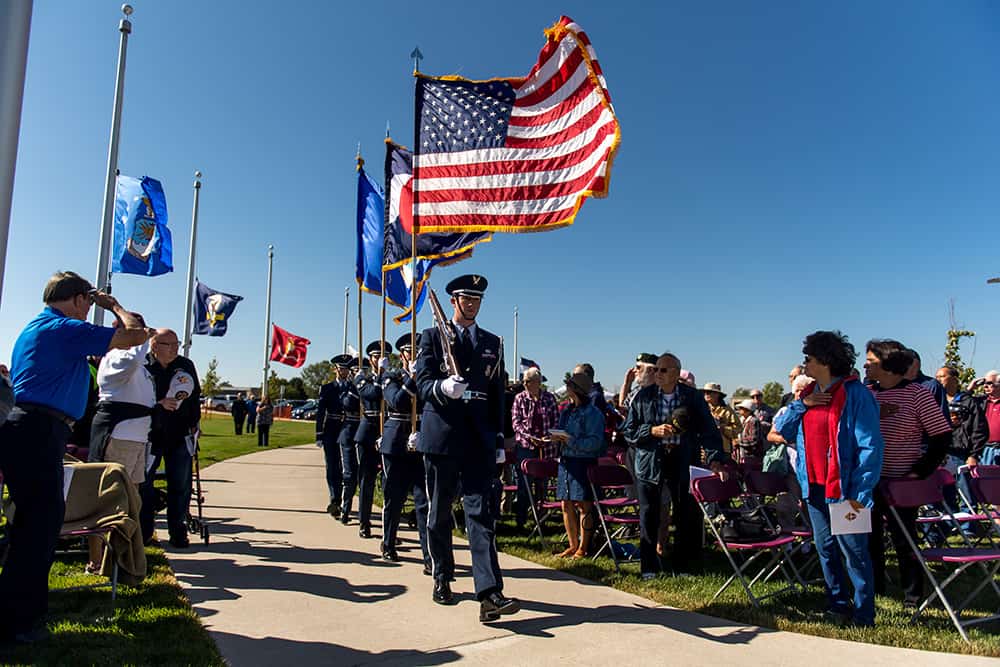 An Air Force Color Guard advances during a Mass and event for military veterans at the Colorado Freedom Memorial on September 28, 2019, in Aurora, Colorado. (Photo by Daniel Petty/Denver Catholic)

Held the day before the feast of Archangels Michael, Gabriel and Raphael, the Scripture readings were from the votive Mass for them as St. Michael is the patron of military members. In his homily, Bishop Rodriguez explained the Hebrew meaning of the archangels’ names, noting that they point to each angel’s special attributes.

“Michael means … ‘who is like God.’ He is also known as the prince of the heavenly host,” Bishop Rodriguez said, adding that the Book of Revelation speaks of Michael and his angels casting Lucifer and his minions from heaven.

The battle against evil can take soldiers into war to defend people from oppression and terrorism, but an interior fight against the devil also takes place in all our souls, the bishop said.

“We invoke St. Michael to help us in our fight against Satan,” Bishop Rodriguez said. “The angels of the Lord are with us, to protect us and to guide us in this battle. Michael and his angels battle against the dragon.”
Gabriel, he said, means “God is my strength.”

“He appears in Scripture three times as a messenger. He is the one who announces when the Lord entrusts you with a special mission,” Bishop Rodriguez said. “The presence of the Archangel Gabriel indicates you are sent to the mission with the strength that comes from God.” 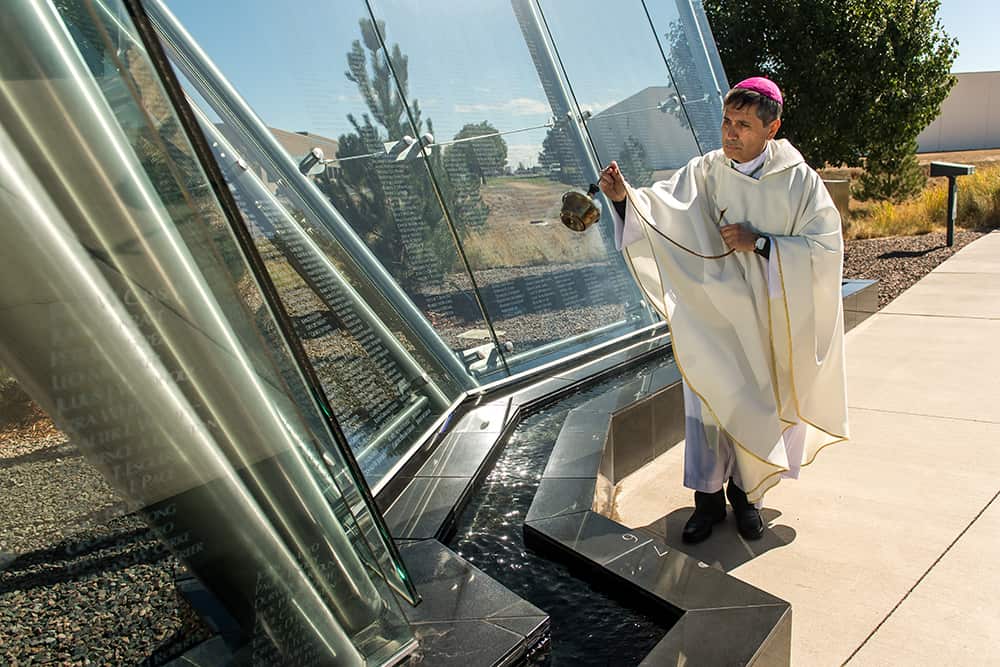 Raphael means, “God heals,” the prelate said. The Book of Tobit describes Raphael serving as a companion, protector and healer.

“He is invoked in critical moments in life … when there are wounds and people need healing. This happens constantly in war and it happens in our spiritual war against the enemy,” Bishop Rodriguez said. “God is always close to us with his healing power. Even when wounded, we can say ‘in God we trust,’ because he has promised us his healing power.”

To do battle and to need strength and healing are everyday realities for military members, the bishop said.

“God and his angels were with you,” the bishop said addressing the veterans. “As he is with us today and will be always.”

Before the final blessing of the Mass, Bishop Rodriguez told the gathering that the liturgy and the memorial blessing had given him a new insight.

“The Eucharist is God giving us his Son in the sacrifice for our salvation. But also in the Eucharist are our own sacrifices, which we unite with Jesus’ for the salvation,” he said. “When I was saying the words of the consecration, This is my body given up for you, what came to mind was the names of our brothers [listed on the memorial wall] …and [again when saying] This is my blood poured out for you. … That gave a new sense to my Eucharist. May the Lord Jesus bless their souls.”

At the end of the liturgy, a bugler played Taps.
Former U.S. Army Special Forces (Green Beret) Stan Keller, a parishioner at Risen Christ Church and an eight-year veteran, attended the Mass and luncheon with his wife Katerina.

“We came to honor all those who laid down their lives,” he told the Denver Catholic. “It’s very nice to be thanked for our service, but I was just doing my job.”

Katerina described the liturgy in one word: “Gorgeous.”

Deacon Jim Doyle, who served as an air evac medic during the Vietnam War, helped his daughter find his father’s name on the memorial wall. His father, Jim Doyle Sr., was an officer in the U.S. Army during World War II. He died at Aachen, Germany just before the Battle of the Bulge. He is buried in Henri-Chapelle American Cemetery in Belgium.

“This is like going to the Vietnam Wall,” Deacon Doyle said, tearing up. “This is pretty emotional.”

In brief remarks before the Mass, retired Air Force Sgt. Bill Lancaster encouraged the veterans to return to God if they’ve fallen away from him, trusting that like the biblical Prodigal Son, God will welcome them back with open arms.

“God has never let you go,” he said. “He has remained beside you and is always calling you back. God loves you more than you can know.”