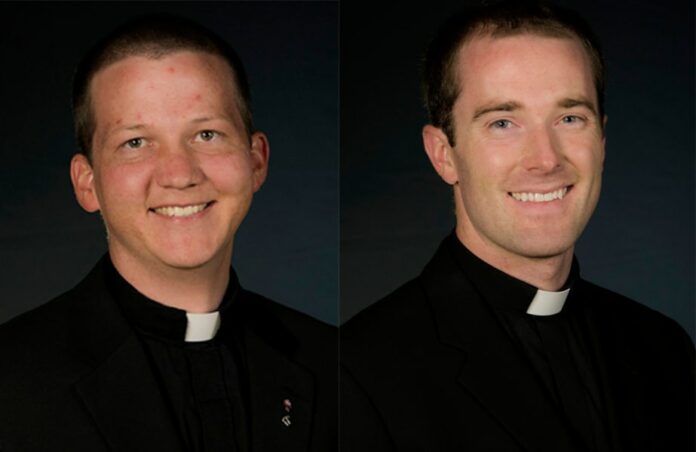 The priestly ordination took place May 14 at the Cathedral Basilica of the Immaculate Conception. The ordination was recorded and can be viewed here. Over the next few days, the Denver Catholic will be posting profiles of all of Denver’s newest priests.

James Claver didn’t know many priests growing up. Everyone he did know, though, was convinced he would become one.

“I had respect for priests growing up, but I didn’t know any priests very well,” he said. “[Encouragement to enter seminary] first started with my youth group—originally core members said so, then my youth minister, then my youth group friends, then friends at school, then teachers at school. The best was when my high school Calculus teacher (not Catholic) at my Catholic high school pulled me aside one day and said, ‘Son, I’ve been teaching for 30 years, and I’ve always wanted to teach a priest. Can I retire now?'”

These suggestions began when Claver was 15. He said he first felt called to the priesthood at 18. Now, at 31, he has finally been ordained.

“I’ve never looked forward to something more than this in my whole life,” he said.

Claver, who will serve as the chaplain at Bishop Machebeuf High School, grew up in Austin, Texas. He is a member of the Servants of Christ Jesus, and celebrated his first Mass at Risen Christ parish.

While he says that he is nervous about assuming the authority of the priesthood, he is excited to emulate the qualities he most appreciates in the priests he knows.

“I think that’s what is more admirable and amazing about a good priest —they are able to be a father to you without being related to you,” he said. “I want to be a father to individuals in a similar way as the priests who have been fathers to me. They’re compassionate, supportive, merciful, patient, and loving in a way that is Christ-like and amazing.”

After eight years of seminary, Matthew Magee was ready to become a priest.

Magee said he was strongly influenced by his pastor at Our Lady of Loreto parish, and by his teachers at Regis Jesuit High School. He said it was the experience of going away to St. Louis that made him fully realize his call to seminary.

“That whole first year of college, I was not at peace until I turned in my application to the seminary. Once I turned it in, I had this great peace come over me,” he said.

He said that eight years of seminary have only strengthened his resolve to be a priest.

“Despite the length of seminary formation—and all the ups and downs that it entails—my desire for priesthood has grown more and more. I am humbled by the fact that the Lord has called me and Holy Mother Church has affirmed this call,” he said.

He said that based on his experience of being ordained to the diaconate last year, he imagines his priesthood ordination will humble him. Luckily, he also said that humility is the quality he most appreciates in other priests.

“Even with the diaconate ordination, receiving the grace and mark of ordination was a big adjustment and a humbling gift to accept,” he said. “The reality of priesthood is certainly daunting, but I am getting more and more excited to serve the Lord in the path He has chosen for me.”