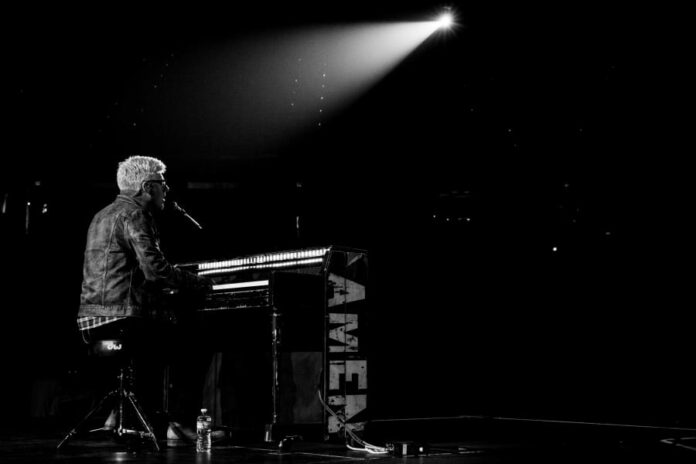 The call for a singular Christian life is a personal mission for musician Matt Maher, who will play two shows at Red Rocks Amphitheatre this summer. Maher is a five-time Grammy nominee and chart topping Christian rocker. He even played in front of Pope Francis at World Youth Day. But despite all that, he says he is primarily called to remember he is a child of God.

Maher’s first Red Rocks show will be on June 14, where he will play a 30-minute set during the “Third Day and friends” show. He will return Aug. 13 to play a set during Chris Tomlin’s concert. That show will also feature Matt Redman, Rend Collective, Kari Jobe, and other artists from different Christian denominations coming together for a night of prayer and worship. Maher said he was both humbled and excited by both invitations, and hopes it will serve as an example for the Christian community in Denver.

“The big thing I’m praying for is a greater manifestation of Christian unity,” Maher said. “We need to be able to publicly proclaim our Christian faith together, because that’s what people see.

“People don’t look at Christians and categorize us. We do that to ourselves. Protestants do it to Catholics, and Catholics do it to Protestants. I think we’re missing the whole point.”

A cry for Christian Unity

Maher has managed to bust out of the exclusively Catholic entertainment bubble. His songs are regularly featured on Evangelical and worship stations, and he frequently collaborates with song writers from other Christian denominations.

He said he made a choice to be true to his Catholic faith, but remain accessible to all Christians.

“I made an intentional decision to write music that spoke about the faith in a way that everyone can understand,” Maher said.

“If we want people to believe in the Real Presence, we first have to get them to understand that God is real and He is present in their lives. Once people accept that, they might be willing to accept the more audacious claim that he is present in the Eucharist.

Maher said that everyone—from the audience at Red Rocks to Christians serving abroad—is called to be a missionary. However, this mission must be anchored in the fact that Christ is already present, and wants unity and conversion more than the missionary ever could.

“If you were a missionary, and you were approaching your mission with the knowledge that Christ is present and you were going to reverently find him, versus you’re the one who’s bringing Jesus, it changes your posture,” Maher said.

Maher came close to breaking the Catholic internet in January when he posted a selfie with Taylor Swift.

“I was at a Grammy nomination reception in Nashville with my wife for date night. It was one of the first nights we had been out in a couple of months,” Maher said.

Maher said he and his wife were excited to simply wear nice clothes and talk to adults. Then his wife saw Taylor Swift. She immediately got in line to get a picture with Swift, while Maher went to get a drink.

“And then it sort of dawned on me: You should help your wife get the photo,” Maher said.

He found a Grammy employee he knew, who introduced Maher and his wife to Swift.

“We just couldn’t believe how incredibly present she was. It blew me away. She made every single person that she talked to feel like a million bucks. I walked away from it going, ‘I don’t do that, and I’ve made a whole career out of singing songs about Jesus,’” Maher said.

He said he found the experience convicting.

“For a 25-year-old who is arguably one of the most popular human beings on the planet, she did an incredibly graceful job of making people feel valued and special. That’s a real gift.”

Catholics on Twitter and Instagram were thrilled to find a picture of a well-known Christian artist posing with a pop icon like Swift. However, Maher says the two worlds need to collide more often.

“I think we all struggle with this. There’s this whole idea that there’s a Church subculture, and that’s where we do Church stuff, and then there’s just normal life. We’re called to have a singular existence,” Maher said.

He said he wants this singular existence to exist for his children.

“I have a year and a half-year-old daughter. Before I know it, she’s going to be in elementary school. She’s going to be looking in a mirror wondering whether or not she’s pretty. I don’t want her to walk in Church and think one thing, and then leave Church and think something else. I just want her to grow up in a world where she can be the same person no matter where she is,” Maher said.

Music points us to God

Maher said he hopes to share the beauty of this faith through his music during his Red Rocks concert. While he says he has to be realistic about how much music can accomplish, he knows that God can use everything—including music—to draw creatures to Him.

“God created the whole natural world not just to give him glory, but to point us back towards him. I think music has the ability to transcend all the different garbage in life and get right down to the heart of the matter in touching someone’s soul,” Maher said.

“A song is like a monument that my soul creates for God around some kind of breadcrumb he left pulling me towards him. You never really know what’s going to inspire a good song or where it’s going to come from. All you can hope is to make the most authentic version of that song, of what the song could be.”

One of these songs, “Lord I need you,” appears to have reached this potential. Maher performed it live at World Youth Day in

front of Pope Francis during eucharistic adoration. Many recalled the moment as one of the most moving experiences they had in Rio de Janeiro, Brazil. And yet, Maher insists that he didn’t write the song because he thought the people of World Youth Day needed to hear it. He wrote it because it was on his heart.

“Music is this universal language that synthesizes the longing of our hearts and our souls in their longing toward God. I think that I’ve always felt called in a way to write songs that proclaim what the Church believes, and hopefully reaching out to people, from my own human condition. I didn’t write “’Lord, I need you’” because I thought it was what people needed to sing. It was what I needed to sing,” Maher said.

This attitude also led him to write the song “Sons and Daughters” on his newest CD, “Saints and Sinners.” The song features excerpts of speeches from Dr. Martin Luther King, Jr., and calls for reconciliation between races and denominations. Maher said he hoped the song would help re-engage Christians in civil rights battles. Incredibly, he wrote the song months before the events in Ferguson, Mo., sparked a nation-wide debate on racial discrimination.

“There are a lot of times when God calls you to do something in your life and you don’t understand why, but you just have to do it,” Maher said. “I’m a white kid from Canada. I don’t understand the plight of racism. Yet for whatever reason, God did really

put a burden on my heart for that in the months before the events unfolded in Ferguson.”

Maher has had friends in Colorado for years, but says his connection to the city started with the shooting at Columbine High School in 1999. A friend of his, Jim Beckman, was the youth minister at St. Francis Cabrini parish. Maher came and prayed with the teens a couple of months after the shooting.

“There’s still a real heavy weight on that community. I think I’ve always just had a heart for what happened there and kept in touch with people,” Maher said.

Maher played in Denver parishes at the beginning of his career. He is also friends with several ministries in Denver, including the Fellowship of Catholic University Students (FOCUS) and the Amazing Parish Conference. The June 14 show will be his first at Red Rocks.

Maher said he is thrilled to play at Red Rocks, and hopes his presence on stage with so many other Christians will help break down barriers between Catholics and other Christians. But he said that he can’t let this success become his identity.

“We live in a time when people are tempted to define who they are by what they do or their degree or their accomplishments. I think ultimately, we’re called to self-identify as children of God,” Maher said.