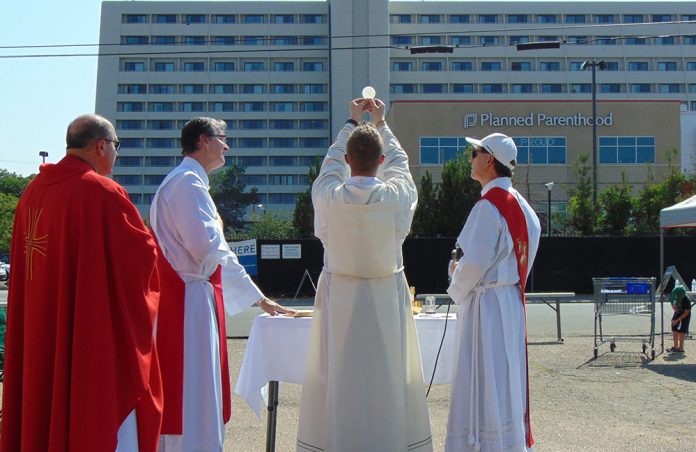 Catholics gathered across the street from Denver’s Planned Parenthood abortion facility, the largest in Colorado, Aug. 14 for the launch of a new pro-life initiative: 40 Days for Life 365.

In doing so, Denver joined a growing list of cities in the US hosting a year-round prayer vigil rather than a fall and spring campaign of 40 Days.

“God has shown us through tens of thousands of saved babies (i.e. miracles) that prayer is our most powerful weapon against this evil,” said Brad Maddock, one of the organizers of the Aug. 14 event and Denver Prays for Life.

“If fifteen elementary children were murdered today our community and news media would be outraged. Instead, we have become numb to this killing.”

During the bilingual event, Mass was said, and speakers presented between recitation of the rosary and the Divine Mercy chaplet.

The goal of 40 Days for Life 365 is peacefully to witness to the dignity of life and pray outside a designated abortion facility every day it is open. The number 365 signifies a new movement to make 40 Days prayer vigils year-round, rather than fall and spring campaigns of 40 days.

“The fight of our lives is the fight for the millions of unborn children that deserve their lives,” said Catherine Worachek, a student at Our Lady of Victory High School, who attended the event with her mother and several classmates. “Our heroes aren’t gearing up for a single fight that will culminate in a decisive victory or defeat. Instead, we are pushing for a consistent, daily effort.”

Testimony at the event included the story of a woman who found healing through the post-abortion ministry Rachel’s Vineyard, and Colorado Students for Life member David Nguyen urged those present to apply the doctrine of human dignity to their everyday life.

“I found this profoundly beautiful dignity that marked each person, and I naturally wanted to protect this mark of love,” said Nguyen of a transformative experience attending the March for Life in Washington, D.C. “I implore you all to first find in your own hearts the desire to protect the human person and second to find your own ways to manifest this.”

Co-organizer Kelsey Wicks, who serves as operations manager for CNA, urged those present to recognize that prayer is the engine that changes history and encouraged a daily discipline of praying for the pro-life cause even when they cannot pray in front of an abortion facility.

The event, attended by over 100 persons, ended with Mass.

While the Mass was being said, a car taking a woman to her abortion appointment turned into the Planned Parenthood parking lot and then left, electing instead to go to Marisol, a Catholic women’s clinic down the street.

This venture is the latest in a long history of pro-life activism in northern Colorado.

In 2016, Archbishop Samuel Aquila led a Eucharistic procession around the facility, joined by 1,800 Catholics. The group processed around the 50,000 square foot building seven times.

The abortion facility was built in secrecy, and unveiled in 2008. Thousands joined then Archbishop Charles Chaput and Alveda King outside the facility to protest peacefully its nascent existence Aug. 25 that year.

King editorialized against the facility and the abortion industry in general in the days prior to the protest, calling it “an industry of racism.”

“Taking more African-American lives than gun violence, heart disease, cancer, and AIDS combined, abortion seems to have targeted blacks in a way that can only make remaining Ku Klux Klan members smile,” wrote King in the Denver Post. “For every three living African-Americans, there is one who has been aborted.”