Mary and the meaning of Mother’s Day 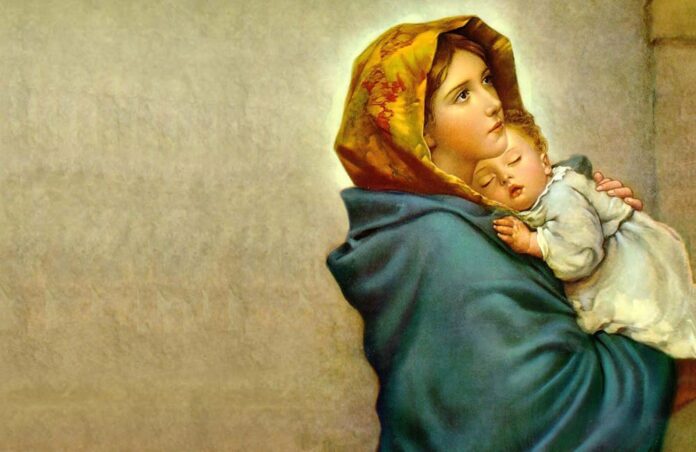 I have celebrated eight Mother’s Days so far, being on the receiving end of not quite a decade of handmade cards and hinted-at gift suggestions from “the kids” (but perhaps purchased by daddy). I struggled early on with the fact that Mother’s Day, of all days and for all its charms, was not actually a day off for mother. That I was still needed for nursing, for disciplinary action, for snuggles and for diaper changes. I expect the first couple decades of motherhood to hold to a similar pattern. “Mommy, we made this for you. And we trashed the kitchen in so doing.”

The moment I started to enjoy my motherhood more deeply was the same moment I began to realize that it wasn’t actually about me. And it is a lesson I learn anew, over and over again. There is a battle that rages in my heart from the moment I wake up to someone’s early morning cries until the final stretch of bedtime chaos. I can loosely plan for little respites of relaxation and prayer with a cup of coffee or 20 minutes of stillness if all the nap times line up accordingly, but I cannot rely on it. In short: my days are not my own, and my time belongs to others.

In giving life, I have given my own life away.

Mary had a radically different experience of motherhood from the rest of us, at least on the surface. Only one baby, and what an exemplar model at that! A saintly husband who silently supported her decisions (she was perfect, after all), a child who never so much as rolled his eyes at her in sass, and God’s assurance that her domestic toils would merit an unfathomable heavenly reward.

Mary didn’t have to worry “am I doing this right?” or “will I mess him up?” And I bet she never felt like fleeing the house at Nazareth when Joseph came back from the wood shop at night.

And yet. I look at Mary’s history-altering fiat at the Annunciation and I see that her surrender was not death by a thousand diapers. Her consent to surrender immediate, it was immense, and it was ongoing. That fervent and fruitful yes at the very outset of her motherhood would encompass the remainder of her life on earth and chart the course for her role in eternity.

And in her surrender, she opened up the course of human events to a divine interruption such as the universe had never seen.

Mary’s heart was sufficiently open to receive the full power of the Holy Spirit’s love, a force so powerful that from her virgin womb, God the child would come forth nine months later. That’s the kind of love the world’s greatest mom is made of.

And her life with Jesus, however steeped in divinity, was not without heartache and toil. I think of the anxiety of the three days she and Joseph searched for tween Jesus, having lost sight of Him on a family road trip to Jerusalem; of the radical trust and courage it took to launch Him into His ministry at Cana, knowing full well the road to Jerusalem would dead end at Calvary. And of course, it is impossible to think of Mary without calling to mind an image of Michelangelo’s Pieta, a crushed and grieving mother holding the battered, lifeless body of her beloved Son.

In short, Mary saw it all. And that makes her the perfect model for us all, no matter how few or how numerous our children, and no matter how great or how hidden our crosses.

This Mother’s Day, let’s ask Mary to show us the radical power of surrender, and the beauty of a heart fully available to live one’s vocation.