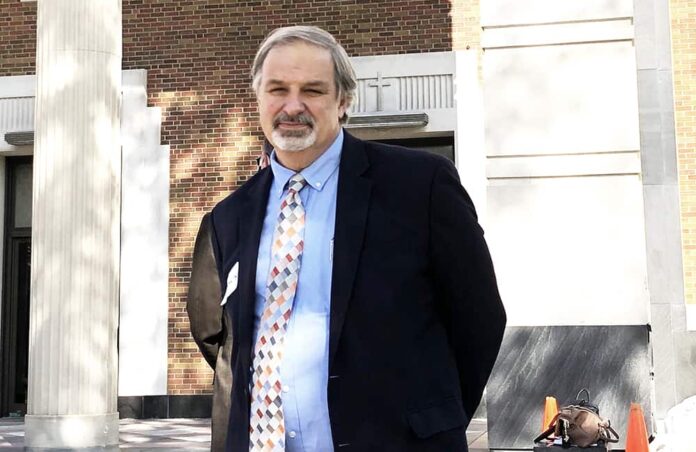 In some sense, Mark Galli was almost destined to be Catholic; God just brought him there in a very roundabout and gradual way.

Baptized Catholic as a boy at the instigation of his grandmother, Galli remembers his first confession. He received First Communion as well, though he has no memory of it (“I have pictures of it,” Galli said.) And on Sept. 13, at the age of 68, Galli was confirmed as the newest member of the Catholic Church at the Cathedral of St. Raymond Nonnatus in Joliet, Illinois.

Though only eleven days a Catholic when the Denver Catholic interviewed him, Galli brings a wealth of knowledge and a lifetime of faith to the Church with him.

A lifelong Christian, Galli was a member of Presbyterian and Anglican churches in the past and served as a pastor for 10 years in the former. Galli also recently retired from an illustrious 30-year career as a Christian journalist and writer. He’s authored several books and still writes regularly for his blog, The Galli Report. Among the various publications he’s worked for is Christianity Today, which he served as editor-in-chief of for seven years.

Though the seeds for his conversion were technically (even spiritually) already planted as a young boy when receiving the sacraments, those seeds slowly began to be sowed during Galli’s stint with Christian History. In 1994, he was editing an issue devoted to St. Francis of Assisi and remembers being taken aback by this saint and his resolute faith.

Around that same time, Galli also became aware of Pope St. John Paul’s II encyclical Veritatis Splendor, which had just been released. While reading through the encyclical and feeding his lifelong interest in theology, something about both St. Francis of Assisi and John Paul II struck Galli.

“The same Church has produced this radical, personal devotion and lifestyle to this great mind,” he said. “I’m thinking, ‘The same Church produced both of these; I need to know more about this.’ It was at that point I started on and off making my way toward Catholicism in a more serious way.”

‘Because Jesus commanded it’

Despite the religious influence in his life early on, religion wasn’t a big part of Galli’s initial upbringing. However, a chance encounter with a TV pastor by his mother when he was 13 changed all that.

“My mother had an evangelical conversion watching Billy Graham on TV,” Galli said. “When he turned to the TV camera and said, ‘you at home that want to accept Christ can get on your knees,’ she did. And in my family, if my mother really got into something, we all got into it.”

From that point on, Galli became immersed in the world of evangelicalism. He and his family began to attend an evangelical church near Mount Hernon in California and study the bible every night after dinner. Galli answered an altar call to give his life to Christ and remained steadfast in his faith growing up.

Chesterton has that famous quote, ‘To be deep into history is to be Catholic. And there’s some truth to that, because you get in there and you begin to see the both the devotion and the wisdom of the church before the Reformation in ways you hadn’t before.”

A 2015 Pew survey showed that 34 percent of American adults practice a different religious tradition than the one they were raised in. It’s also no secret that Catholics are leaving the Church in droves to join evangelical or protestant churches — congregations that still preach the Gospel but are generally more lenient on those difficult teachings of the Church. In fact, according the same survey, for every Catholic convert who enters the Church, six Catholics leave.

The reasons people convert to Catholicism are many. For Galli, it was the rich history of the Church and the gradual realization that the Catholic Church truly is what it claims to be: the one true Church that Christ himself founded.

“Chesterton has that famous quote, ‘To be deep into history is to be Catholic,’” Galli said. “And there’s some truth to that, because you get in there and you begin to see the both the devotion and the wisdom of the church before the Reformation in ways you hadn’t before.”

For many converts, there are often certain doctrines of the Catholic faith that are more difficult to reconcile with Evangelical or Protestant traditions — the veneration of the Blessed Virgin Mary or intercessory prayers to saints, for example. Early on in Galli’s life, he had an experience with a Sunday school teacher that helped to disarm the notion of simply rejecting some of these teachings because he didn’t understand them.

“I distinctly remember this one Sunday school lesson where the teacher read some passage in which Jesus commands his disciples to do something,” Galli recalled. “I don’t remember the passage, but I remember the teacher saying, ‘why should we listen to what Jesus says here?’ And the class came up with … all these pragmatic reasons why we should do this. And he kept on saying ‘no.’ Finally, we said, ‘Well, what?’ And he said, ‘We should do it because Jesus commanded it.’

“That informed my approach to scripture from then on and it just became cemented in me that scripture was the word of God. It was the word of Jesus. And my job was to figure out how to understand it and then put it into my life as I could.”

Alight by the first fervor that comes with conversion, Galli is like a sponge soaking up all that the Catholic Church has to teach. It comes with a bit of a learning curve, he admits, but he’s confident this is where the Lord wants him to be, even if friends, family and his readers and followers don’t fully understand it.

“I can tell my family, my children especially, are a little mystified, like, ‘oh, what’s dad doing now?’” he said. “Two people have told me I’m going to hell because of this. But pretty much everyone else, and this would be dozens and dozens, if not hundreds of people, basically said, ‘awesome!’ It’s an interesting time in church history for that to happen.”

Now, Galli can experience the fullness of the universal Church and participate in the Sacred Liturgy, no matter where in the world he may find himself. While visiting family in Denver in late September, Galli went to morning Mass at the Cathedral on the feast day of Padre Pio. Afterwards, he was given a Padre Pio prayer card and medal – and wasn’t quite sure to make of them.

“I picked it up and I opened it in my car, and I thought, ‘Well, a prayer card I get, you turn it over and you say the prayer. But what am I supposed to do this medal?’” he said with a laugh. “It’s even things like that. Are these on a chain or is there a chain with a bunch of medals on it? Or do I wear it on the wrist? What do I do with this thing?”

He lets out a hearty chuckle and smiles. “I’m part of the family, but man, I have a lot to learn.”

Christmastide lessons from Linus and the lowly shepherds