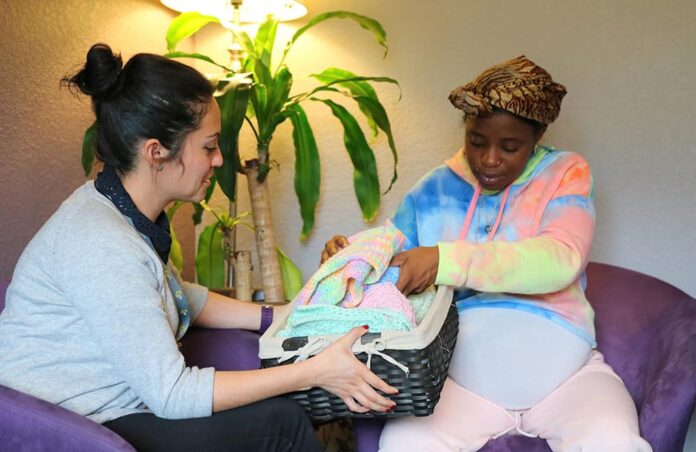 Nearly half of pregnancies among American women are unintended, and about 4 in 10 of these are terminated by abortion, according to the Alan Guttmacher Institute. Twenty-two percent of all pregnancies (excluding miscarriages) end in abortion, the 2013 study shows.

There were 8,333 abortions last year in Colorado, a decrease of nearly 18 percent from 2015, according to the Colorado Department of Public Health and Environment.

Denisa Thomas, 28, is among the women Marisol Health helped to bring their unborn babies to birth. Thomas had already had three abortions and several miscarriages when she first visited Marisol’s Denver clinic, strategically located across the street from abortion provider Planned Parenthood of the Rocky Mountains’ headquarters.

Adding to Thomas’ distress: the father of her unborn child was incarcerated, she had no health insurance and an 8-year-old son to care for.

“Planned Parenthood was my favorite place to run to,” Thomas said. “That’s mostly the reason why I’ve done abortions in the past, out of fear of being a single mom and struggling.”

With her history, Thomas feared she couldn’t have a healthy pregnancy.

“I thought maybe I had messed my body up and I wanted to see … if the baby was OK,” she said.

At Marisol Health she heard the baby’s heartbeat and saw her growing child via an ultrasound.

“If God gave me one more chance to have this baby, I’ve got to have it,” she decided.

The compassionate staff at Marisol Health helped her make a plan. They scheduled her appointments, gave her donated clothing and suggested resources to help during pregnancy, and after. She now takes classes at Community College of Aurora and worked part-time while awaiting the birth of her child.

Thomas has reclaimed her dignity and, with it, confidence.

“We try to address all the barriers women are seeing in their lives that are influencing their consideration of abortion,” McIntosh said. “We really try to walk with them and help them realize they have more options than they might see at the current time.”

Formerly known as Lighthouse Pregnancy Center, the name of the clinic was changed to Marisol Health in July 2016, when it also expanded its services to offer women affordable, comprehensive health care. Within a short time it added a second location in Lafayette and an outreach office at the University of Colorado in Boulder.

“We wanted to come up with a brand that would resonate primarily with women in the childbearing years,” McIntosh said, adding they were led by research from the Vitae Foundation, which helps pro-life organizations create messaging that resonates with abortion vulnerable women.

Vitae Foundation findings show that women with crisis pregnancies often shy away from overtly religious clinics for fear of being judged, McIntosh said. The Spanish name Marisol, she added, aims to evoke the beauty and essence of nature while subtly paying homage to Catholic values.

“Marisol was created from mar, which means sea, and sol, which means sun,” McIntosh said. “In history, it’s also a term that honors the Blessed Mother.”

The name is believed to be a shortened version of Maria de Sol, “Mary of the Sun,” or Maria de la Soledad, “Mary of Solitude.”

Marisol Health clinics are welcoming, women-focused centers whose Catholic identity shines through the chapels available for the guests and the Christian care of the staff.

The clinics are just one arm of Marisol Services, which also includes housing for single expectant mothers, single mothers with children and single women, who are experiencing homelessness, through four Marisol Homes, and human services through other Catholic Charities entities.

During fiscal year 2017, Marisol Health served 821 clients, 70 percent of whom earn less than $30,000. Additionally, 133 babies were born to mothers assisted by Marisol Health. The most recent may be Thomas’ daughter Leah, who was born Dec. 12.

Marisol Health made possible the seeming impossibility for Thomas to have her child and to build a brighter family life and future. She continues to be served through Marisol Health.

“When I go in I feel like I’m the only person there,” she said. “If I have a bad day, I go to talk to someone. I get plenty of support.”

In fiscal year 2017, the number of women who received prenatal care at Marisol Health increased four-fold. The clinics are now at, or close to, capacity given their current number of providers, for prenatal visits, McIntosh said.

For information or to donate visit MarisolHealth.com