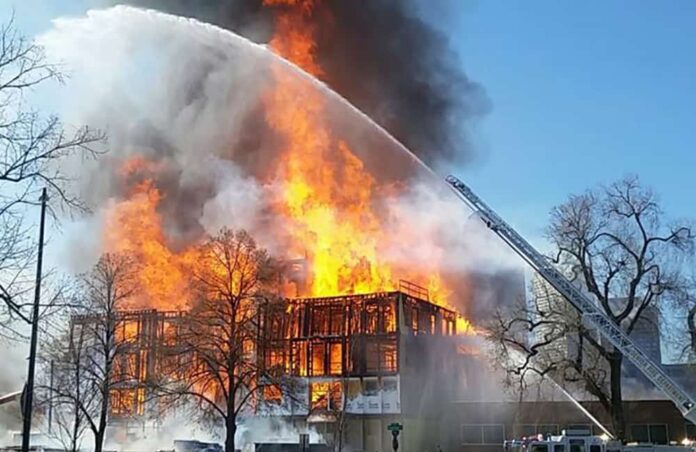 Elías Venegas, 53, the man who was witnessed hanging from the third floor trying to escape the raging fire that rapidly consumed the construction site at 18th and Emerson on Wed., March 7, says he was not alone. He has no broken bones and suffered no organ damage or concussion. He’s simply sore.

“I felt that God was there and that he acted. He was protecting me,” Venegas told the Denver Catholic. “That’s how he manifests himself in our lives.”

Venegas was the person farthest away from the exit, as he was on the roof of the five-story building when the fire broke out.

“I finished eating [on the roof] and told one of my co-workers I had to call my wife,” he said. “So, I walked away from them, who were next to the ladder, to the opposite side of the roof. And as I was walking back, I saw smoke coming up one side of the building, and yelled to warn them. If I hadn’t walked that way to call my wife, I don’t know what would have happened.”

He remembers the next few seconds confusedly, but he recalls running behind his colleagues down to the third floor, where authorities believe the fire originated. There, he encountered a thick cloud of black smoke, so much that he lost sight of his co-workers and could barely see the ladder leading to the second floor. It was almost completely dark.

“I decided not to go down. Something was telling me not to go through there,” Venegas said.

Instead, he ran to the first opening he saw, a balcony door that had wood studs running across it for safety. He got to the outside of the building and tried to swing himself to the second floor, but as he was hanging, he realized it was impossible.

There he was photographed by a witness, just as he was getting ready let go.

“My arms got tired and my hands started burning. It was too hot,” Venegas recalled. “I looked down and thought, ‘I can’t jump, it’s too high!’

“I then remember letting go, and as I was letting go, I felt a cool breeze, as if someone had blown at my face. And I didn’t feel anything else. I don’t remember falling or landing. The next thing I remember is people around me asking me if I was OK. I got up confused and dizzy, but my only clear thought was that I had to call my wife.”

His co-workers, who had barely made it out safely, didn’t see him come out of the building and thought he hadn’t made it, so when they saw him on the street, they received him with much joy.

Venegas was taken to the hospital that afternoon and the following day for a general check-up, x-rays and other tests, but there was nothing wrong with him.

“I’m just a bit sore,” Venegas said with a smile on his face. “Everyone was amazed, even the doctors, that I had no broken bones or other serious injuries. The nurse, the security officer and my supervisor said it was a miracle that nothing happened to me jumping from that height.”

Venegas, who is a catechist at St. Pius X Parish in Aurora and a volunteer in other archdiocesan organizations such as the San Pablo School of Evangelization for the Hispanic community with his wife, Raquel, is mostly grateful for being alive.

“God didn’t want me there [in Heaven] because I have yet to finish my mission here on earth,” Venegas said. “It saddens me to think that two other workers couldn’t escape. I will be praying for them and their families.”

“I feel very grateful for this new opportunity that God has given me,” he said. “We proclaim a living God and I was able to experience that. He’s not just something that happened 2,000 years ago. He still acts in our present world. I’ve seen it and so have many other people.”