His Church. Our Experience.
Subscribe
HomeLocalEventsMake a pilgrimage to Colorado’s first shrine for victims of human trafficking
LocalEvents 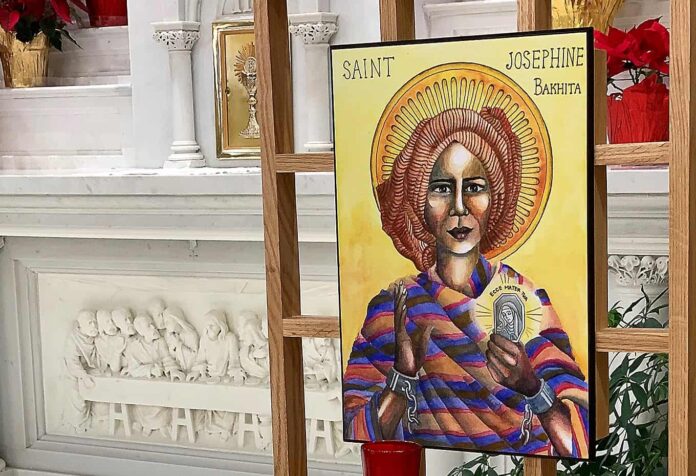 On any given day during 2016, an estimate of 403,000 people were living in conditions of modern slavery in the United States, according to the 2018 Global Slavery Index. This evil that so many times seems foreign, also exists in America, and it may be much more common than many believed — ranging from forced labor to forced sexual exploitation of adults and children.

Nonetheless, where darkness is present, the light of prayer and charity can make a true difference.

Catholics in northern Colorado can now make an impact by making a pilgrimage to Guardian Angels Parish in Mead — located nearly 35 miles north of Denver on I-25 — which Archbishop Samuel J. Aquila designated as a shrine for victims of human trafficking in January 2018.

It all began with the devotion to St. Josephine Bakhita that Father Alan Hartway, CPPS, initiated even before he became pastor of the parish.

“Even when I started coming to the parish as a substitute priest in the early 2000s, I began to emphasize [the meaning of] hospitality to [our parishioners], and how important that was, as the forefront ministry of evangelization parishes,” he recounted. “So, I introduced them to St. Josephine Bakhita because she is also the patron saint of hospitality ministry —that was her work.”

The Sudanese-born saint was kidnapped as a child and sold into slavery. After being sold several times, she arrived in Italy, and was gifted to a family that gave her nursemaid duties.

The future saint would accompany the girl she cared for to catechism classes in Venice, where she met the Canossian Sisters and later decided to join the Church, adopting the name Josephine.

After refusing to return to Africa with the family that claimed rights over her, the Canossian Sisters testified on her behalf before a judge, who eventually ruled she was free, since slavery was illegal in Italy.

Bakhita joined the religious order, where she carried out her duties of cooking, sewing and welcoming guests, eventually becoming very loved by children and visitors.

“When we built our new Church, I requested from Archbishop Aquila that we have [St. Josephine’s] relic in our altar, and when we secured the relic from the Canossian Sisters, in that same letter he designated this [parish] as a shrine for victims of human trafficking. So, he challenged the parish to have a hospitality [that goes] very deep,” Father Hartway said.

While the parish community is still developing its mission, Father Hartway hopes to begin contributing to this cause by educating people on the reality of modern slavery, praying for the victims and welcoming people how they deserve to be welcomed.

“The first step is familiarizing people with [St. Josephine Bakhita’s] story. The plan is to build on that gradually and develop the full meaning of our shrine… We have started by praying [for the victims] and honoring her feast day Feb. 8. We have a nine-day novena beginning Jan. 31, expose her relic and icon during the novena and nine more days after that, and have named our parish hall the Bakhita Hall,” he said.

“We also want to help people realize the effect of human trafficking and modern slavery in the modern world, and to make people conscious — to provide a way for them to be generous to these kinds of causes. It also opens their hearts to hospitality to everyone… something we take seriously here. When people come here on pilgrimage, we would show them the hospitality maybe they’ve never had in their lives.”

Christians have observed the tradition of making pilgrimages to sacred sites since the first centuries of Christianity, when they would visit the tombs of the apostles and martyrs, and the Holy Land.

More than sightseeing, however, pilgrimages are deep and transformative spiritual journeys, which were even popular acts of sacrifice and penance for grave sins during the Middle Ages.

People can go on pilgrimage to ask for special intentions or causes to the patron saint of a specific shrine or sacred place.

The faithful in Colorado will now be able to make a pilgrimage to Guardian Angels Parish and ask for St. Bakhita’s intercession for the victims of human trafficking and their own special intentions.

“We welcome everyone, regardless of their language, their color, their race, etc.,” Father Hartway said, calling to mind that many victims of human trafficking in the United States are people from other countries who are forced to work in inhumane conditions, under domestic servitude, or at times are even exploited by the pornography industry.

“Migrants, and especially migrant women and children, are particularly vulnerable to modern slavery in the United States due to their ‘low level of education, inability to speak English, immigration status, and lack of familiarity with the U.S. employment protections,’” the 2018 Global Slavery Index attests.

Children, and particularly those who are or have been in the child welfare system, are also particularly vulnerable to abuse and exploitation.

Amid this reality, the parish community at Guardian Angels Parish in Mead hopes to shine a light for victims of human trafficking by reflecting the spirit of the saint who, even after suffering the endless pains of slavery, was able to say, “The Lord has loved me so much: We must love everyone.”