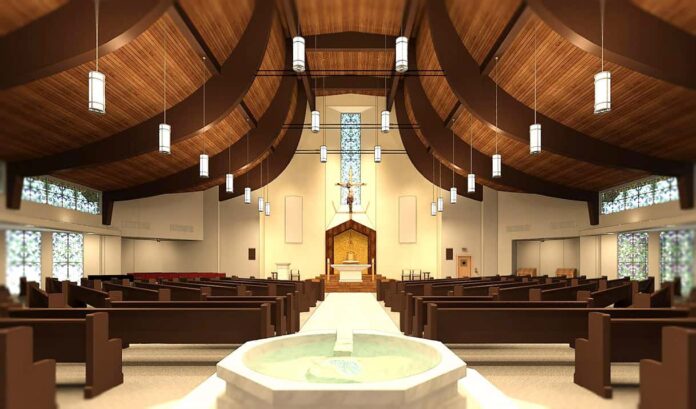 During Dick and Sue Reznik’s time in the military, they found themselves moving frequently and simply passing through Catholic parishes as a result.

It wasn’t until they retired and moved to Loveland six years ago that the couple discovered a sense of home at St. John the Evangelist Catholic Church.

“We found that in so many ways, St. John really demonstrated the love of Christ and really brought to life the love in the city of Loveland,” said Dick.

“We were blown away that as new retirees, we had an opportunity to really become involved in church life much more so than we were able to do while we were in the military.

“We really found in St. John’s a place to establish our faith roots,” he said.

St. John the Evangelist has been a welcoming community for countless parishioners since it was established in the early 1900s.

Consequently, the current church building, which was constructed in 1969, has undergone the wear and tear that comes with the busy life of a parish.

That’s where the “Blessed Past, Faithful Future” capital campaign comes in.

“This is the next step to be faithful to the gift of faith and the community that we’ve received here in Loveland and will hopefully set us up for the next 50 years,” said pastor Father Steve Adams.

Co-chairmen of the capital campaign are the Rezniks, along with Becky and Lou Gerken, who have belonged to the parish for 40 years.

“We believe this campaign is critical for our parish to flourish and transform the lives of future generations here in Loveland,” said Becky.

“Our hope is to welcome new families and individuals, as well as long-time parishioners, to practice and share their faith more fully,” she said.

St. John the Evangelist plans to build a more accessible fellowship hall, parish office building, rectory and youth room, as well as enlarge its nursery. It will also remodel its meeting rooms and renovate the interior of the church.

The interior renovations are particularly essential for this project, as the parish seeks to “bring it up to the standards of the 21st century,” said Dick, particularly with modern audio-visual equipment.

The co-chairs hope the upgrades will enhance parishioners’ faith experience.

“We want the inside of our sanctuary to reflect the beauty of the liturgy and enable a deep relationship with Christ and the sacraments,” said Lou.

This capital campaign is essential for St. John the Evangelist, particularly because it’s the only Catholic parish in Loveland, where the population is somewhere between 75-80,000.

One key aspect of the renovation project is creating a “one-stop location for all of our parish family to access those resources under the church umbrella,” said Dick.

This will make it easier for parishioners to access all the parish has to offer.

“Any big function that the church doesn’t really have a place for typically can go to the Knights Hall, which is a very old structure across the street,” said Sue. “It’s hard in the snow for the elderly to get across the street for any kind of function.”

The new fellowship hall will be attached to the church so parishioners don’t have to walk outside to get there.

“This will allow us to do a whole lot more outreach and evangelization,” said Father Adams, “which is exactly where the Church needs to be right now.”

For the Rezniks, getting involved in some of the ministries the parish has to offer, and particularly this capital campaign, has been a blessing.

“It’s been a really unique opportunity to meet more people that we haven’t met and get involved with something that’s so important for our church,” said Sue.

The Gerkens, whose three daughters grew up at St. John Catholic School and whose six grandchildren currently attend it, are also grateful to be a part of this undertaking.

“We are excited about the current capital campaign and are thankful to those who, years ago, had a vision to pass their faith on to future generations here at St. John’s,” said Lou.

“It is time for us to carry that vision forward.”