His Church. Our Experience.
Subscribe
HomeLocalLove your Motherboard: Colorado-based company is unifying Church and skate
Local

Love your Motherboard: Colorado-based company is unifying Church and skate 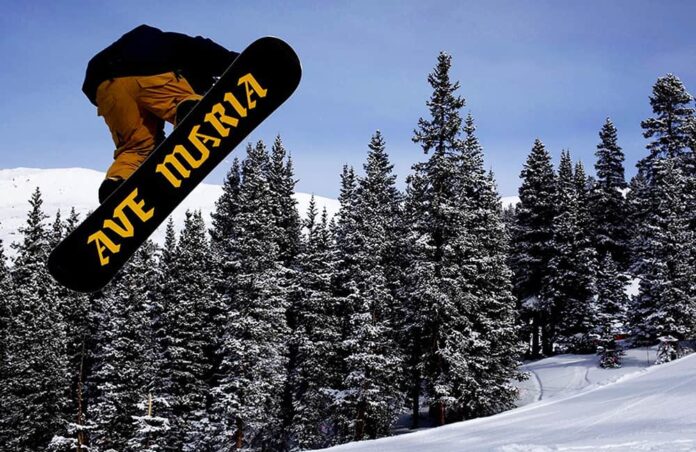 Let’s face it: When it comes to skateboarding culture, there could be a little less skull and crossbones, and a little more Sacred Hearts.

Five years ago, Lisa Fixler had this realization when her son and his friend, both of whom are avid skaters, came into her house with a skate deck that had the image of a skull plastered on the bottom of it.

“I look down at the ground and I’m like, ‘what is that doing in my house?’  I was just repulsed,” Fixler said “I started talking to my husband and we’re like, ‘why does it have to be that way?’ Go into any skate shop and look at the designs that are available for kids. They are horrifying.”

Having already founded the local Catholic gift company Full of Grace USA 10 years ago, Fixler has extensive experience in creating quality products with a Catholic bent. So, she decided to do something about the skateboard conundrum that had made its way into her home, and thus, Motherboards was born.

Motherboards is a Catholic skate company that also deals in other extreme sports such as snowboarding and surfing. They enlist the talents of artists around the country to create traditional Catholic images with a bit of an edge to adorn their decks and boards. It may seem a bit unusual at first glance, but dig a little deeper and it’s obvious that Motherboards is trying to do something different, both in the extreme sports world and on the evangelization front.

“If you’re at the skatepark riding and someone looks at your deck, and it’s a picture they don’t understand…maybe it’s the Immaculate Heart of Mary and they say, ‘wow, that heart is really cool. What is that?’  Well, that’s your open door to evangelize,” Fixler explained. “It’s not in your face. It’s just answering a quick question. And you can answer that question in a way that tells them about their fate or the kingdom of God… Whatever it may be, it just makes it easy.”

Motherboards already has a team of talented skaters and snowboarders who are representing their brand and starting conversations.  One of their skaters is Brother Gabriel Cortés, a Franciscan Friar of the Immaculate based out of Bloomington, Ind., and affectionately referred to as the “skating friar.” Few things compare to watching Brother Cortés tear it up in his grey Franciscan habit.

After a long day of prayer, devotion and his other duties as a friar, Brother Cortés frequents a skatepark near his friary where he’s built strong friendships with some of the regulars.

“I can talk to them about anything. It’s an avenue that I have access to that a lot of people don’t have access to,” Brother Cortés said. “They know me well. And some of these guys, I can tell they have nothing in their lives. Nothing…even moral compasses are kind of absent.”

Brother Cortés admits that extreme sports culture can be a bit off-putting to those who don’t understand it, especially Catholics.

“The skateboarding, snowboarding and surfing culture is all very, very similar, even though the sports are quite different,” he said. “There’s a bit of a subculture that exists in these in these groups, which is not very wholesome, is kind of dark.”

That’s all the more reason, Brother Cortés said, for Catholics and other people of faith to become more immersed in that world and help break down those walls that separate “us” from “them.”

“If you think about it, we’re the custodians,” Brother Cortés explained. “Catholics look at it from the wrong way,” he said, like we don’t fit into the skateboarding or extreme sports world. “No, it’s ours. It’s our stuff. They’re playing with our toys. We just need to introduce them to the right way of playing with our toys.”

Fixler recently opened a retail storefront in Arvada called The Retro, where both Full of Grace and Motherboards products can be purchased. But the interest in Motherboards has already expanded far beyond Colorado.

“We get e-mails from people all over the world who are interested in our products. It’s unbelievable. It’s really turned into a worldwide thing,” Fixler said. “It’s super fun for us for shipping off [complete boards] to Australia or to Belgium or to France. We just think, ‘oh my gosh, we’ve got just this teeny little idea and we’re targeting a really narrow group of extreme sport enthusiasts who may or may not be Catholic.’ But we’ve been blessed completely.”