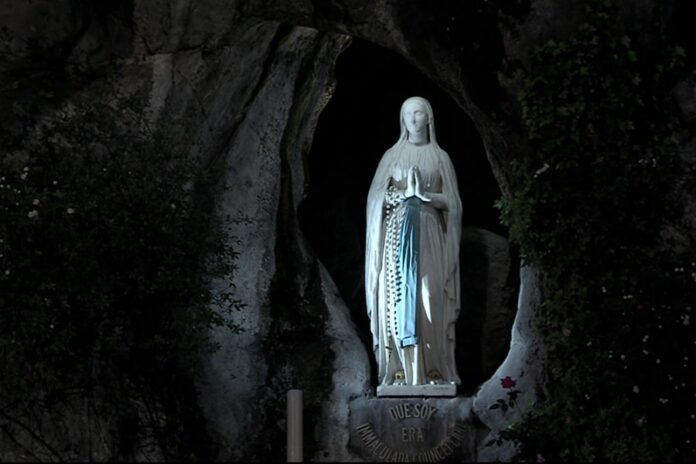 Editor’s note: This story is from 2016. As of 2022, Our Lady of Mount Carmel Parish no longer carries water from Lourdes.

After a five-year dry spell, water from the famed Lourdes shrine in France is back in Denver.

People can begin getting it next month when the Lourdes Marian Center at Our Lady of Mount Carmel Parish in Littleton officially opens. The center is just the fourth U.S. site permitted to distribute water from the spring that the Blessed Virgin Mary helped St. Bernadette Soubirous discover in 1858.

An opening day reception is set at the center, located at 5612 S. Hickory St. in Littleton, from 4 p.m. to 7 p.m. Jan. 7, 2017. The event is free, but goodwill offerings will be gladly accepted to offset the $3,300 cost incurred to ship the barrels of water from France and to purchase more water in the future.

“We’ll have small bottles of Lourdes water available,” said parochial vicar Father Joseph Hearty, F.S.S.P., about the 1-ounce bottles the center will distribute for a suggested donation of $2.50.

The festivities will include light refreshments and talks about the history of the Sanctuary of Our Lady of Lourdes in France and about the Littleton center’s local predecessor—the Lourdes Marian Center that was run by St. Vincent de Paul Parish in Denver from 2003-2011.

The new center was announced in 2014, when Father James Jackson, pastor of Our Lady of Mount Carmel, received permission for the parish to distribute Lourdes water. But due to a series of miscommunications it took two years to actually begin getting the water, which many believe has healing powers.

On Feb. 8, 1858, Mary, who later identified herself as “the Immaculate Conception,” made the first of 18 appearances over five months to 14-year-old Bernadette Soubirous at the grotto of Massabielle near Lourdes. Her message concerned the necessity of prayer and penance for the conversion of peoples. Mary instructed Bernadette to drink from a new spring that appeared at the site and to have a church built there. Today, 5 million pilgrims a year visit the beautiful Lourdes shrine to drink, wash or bathe in the water.

The shrine says the water does not have any special curative properties, but recognizes that God can work through natural elements, prayer and sacraments. The Church has verified 69 miraculous cures linked to the water, although thousands more are claimed.

“This water couldn’t do anything without faith,” asserted St. Bernadette, affirming Church teaching.

The Church authorized a feast commemorating the apparitions and Bernadette, who died as a nun in 1879 and remains incorrupt, was canonized in 1933.

“The purpose of the Lourdes Marian Center is to distribute the water for possible healings and conversions, and to help spread devotion to Our Lady,” Father Hearty said.

Once open, the Lourdes Marian Center will have set hours and, eventually, a website.