His Church. Our Experience.
Subscribe
HomeLocalLooking back at the 1918 Flu epidemic in the Archdiocese of Denver
Local 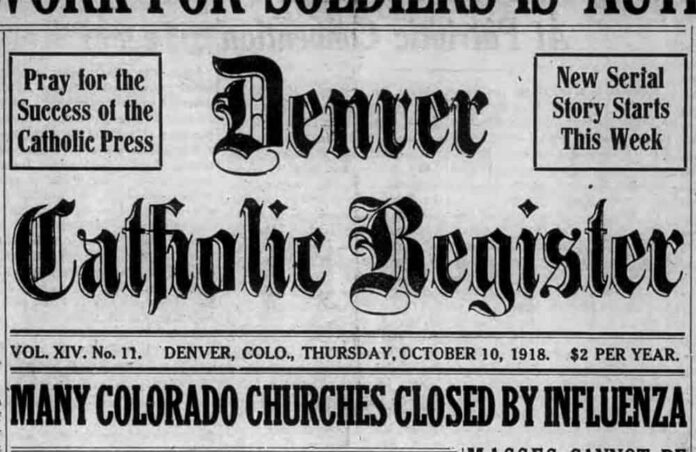 In September 1918, the Spanish Flu began to ravage the world. Despite its name, the Spanish Flu’s origins may not have been the Iberian, but by the time it had run its course, this H1N1 “bird flu” virus infected about 500 million, killing an estimated 50 million worldwide with 675,000 of the victims in the United States.

Just over a century later and in the midst of our own global pandemic, a look back at media reports during the time of Spanish Flu is eerily reminiscent of our current era.

The first recorded death from the flu in Denver occurred on Sept. 27, 1918. By Oct. 6, schools, theaters and churches were ordered to close by Dr. William H. Sharpley, Denver’s Manager of Health. A front page headline in the Oct. 10, 1918 edition of the Denver Catholic Register read: “Church is without Mass first Sunday in thirty-six years”; another headline on that same front page read: “Many Colorado churches closed by influenza – Masses cannot be offered on Sunday even outdoors in many Colo. parishes.”

What followed in the subsequent weeks was not unlike what today’s Catholics in the Archdiocese of Denver experienced through the month of April and into May. In the Oct. 17, 1918 edition of the Register, one article headline read: “Mass prayers said at home are truly consoling in days of closed churches.”

The article began by describing the scene at a parish in Pueblo: “St. Patrick’s church was lonely and desolate again last Sunday. No Mass, no Benediction! What a weary, dreary place this worldly world becomes without these great manifestations of Infinite Love. We feel like the Children of Israel in exile, as they watched by the waters of Babylon and wept when they remembered Sion [sic].”

It went on to offer words of instruction to the Catholics of the day, which are, once again, germane to what today’s Catholics experienced during the month of April, and even are experiencing now, as public Mass is still limited and not yet being celebrated at full capacity: 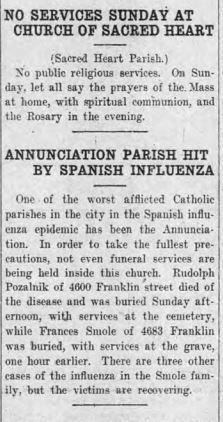 “All good Catholics, especially those who have the missal in English, should read and ponder their Mass prayers at home on these Sundays when they cannot assemble in church for the Great Sacrifice. In the sublime words and sentiments which Holy Church prescribes as instruments to be used in each Mass, they will find much matter for thought and much meat for consolation.”

As the death count dwindled and it seemed the peak had passed, Dr. Sharpley lifted the ban on public gatherings Nov. 11. That also happened to be the day World War I ended. In the book Denver: Mining Camp to Metropolis, a raucous scene is described: “Health regulations would have been ignored that day anyway. Thousands jammed downtown streets, shouting and yelling, trailing tin cans behind cars and bicycles to add to the din. Over 8,000 poured into the City Auditorium to sing and to listen to speeches. In the evening, theaters, many of them redecorated during their idle weeks, reopened to entertain ‘monster crowds.'”

By late November, flu deaths spiked, and Dr. Sharpley once again ordered a ban on public gatherings. He also required shoppers and streetcar passengers to wear masks in public. This sparked a somewhat familiar reaction from the general public: “The rule proved unpopular, especially since people were not certain that the measures would work. Theater owners objected to closing again, and many people refused to wear masks.”

Not long after, Sharpley allowed theaters and churches to reopen with certain restrictions, and he also revoked the mask order. Flu cases peaked in Denver the week of Dec. 7, and rapidly declined through the end of the year.

For Catholics, it probably felt like a more joyous Christmas than usual that year. In the Dec. 26, 1918 issue of the Register, readers were likely delighted to read the headline “Public Mass again said in Littleton.” The article that followed read: “The ban has been raised and attendance at church was permitted on last Sunday. Notwithstanding the depth of the snow and the stormy nature of the morning, the attendance was good, some coming quite a distance. On Christmas morning there were two Masses celebrated … Benediction of the Blessed Sacrament was given after the last Mass.”

How comforting it is to know that in 2020, as we live through another global pandemic, we are loved by the very same Lord who sustained our brothers and sisters in the Church while they struggled through a trial of their own in 1918, and his Church is still standing strong in the midst of it. Let us continue to pray for an end to the coronavirus pandemic.