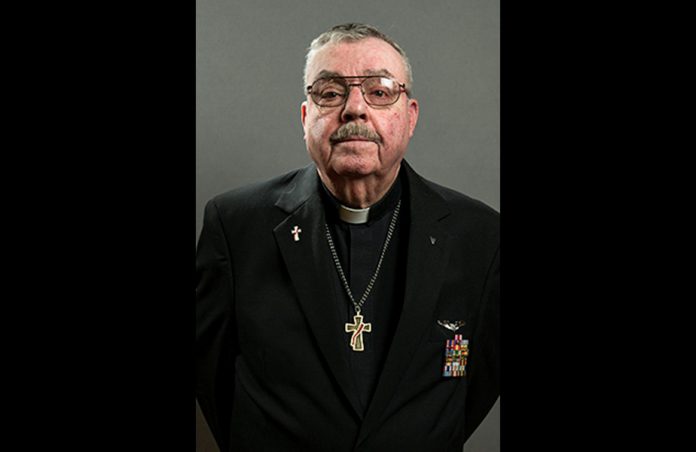 Deacon Tom Quinlan, 84 years old, passed away on March 23.  Deacon Quinlan’s primary assignment was to Christ the King in Evergreen and Our Lady of the Pines in Conifer. He retired in June 2006.

Thomas Eugene Quinlan was born on April 5, 1937, in Little Falls, New Jersey to Thomas and Dorothy Quinlan. Growing up in New Jersey, he was very involved in the Boy Scouts and became an Eagle Scout. He also enjoyed spending time on (HAM) Amateur radio.   After high school, he attended the University of Northern Colorado (UNC) and earned an undergraduate degree in Special Education with a master’s in urban sociology. He later attended St. Thomas Seminary in Denver, taking courses in Theology and Pastoral Care.

In 1959, Quinlan entered as an Airman Basic.  His military life would take him to Colorado where he met his future wife, Glenys.  They were married at the Lowry Air Force Base Chapel in Denver on February 14, 1963. The couple was blessed with two sons: Michael and Christopher as well as, two grandchildren. Glenys passed away in 2020.

After a short time in the Air Force, Quinlan was earned a commission. In 1970, Captain Quinlan was sent to Vietnam as a Combat Photographer. On New Year’s Day 1971, he and his pilot were in a Cessna O-2 taking photographs of the area when his pilot was injured from bullets that hit the aircraft. The pilot, subsequently, went into shock. With no formal flight training, Quinlan was forced to do a “wheels up” water landing in the South China Sea.  He and his pilot survived after a rescue helicopter picked them up and took them to safety. After Vietnam, he was assigned to the Air Force Academy in Colorado Springs and then transferred to Texas where he retired from the Air Force and began discerning a vocation to the diaconate.

On January 29, 1979, Deacon Tom Quinlan was ordained a Deacon by Bishop Rumondo Pina in the Diocese of San Angelo. Then, in 1982, the Quinlan family settled in Conifer, Colo., where Deacon Quinlan was incardinated into the Archdiocese of Denver.  His first assignment was to Our Lady of the Pines in Conifer and Christ the King Parish in Evergreen. During his active ministry, he was also assigned to St. Elizabeth’s and Good Shepherd in Denver and St. Jude’s in Lakewood.  At a few of these parishes, he was employed as the Pastor Administrator. Deacon Quinlan was also very humbled by the opportunity to make the wine used for St. John Paul II at the 1993 World Youth Day Mass.

“Deacon Tom was a hero to many and a positive example to others,” said Deacon Joseph Donohoe, Director of Deacon Personnel. “His ability to make things happen for the glory of God drew others to the foot of the Cross.  He had a particular love for the disadvantaged and neglected, especially military veterans.”

A Christian funeral mass was celebrated by Bishop Jorge Rodriquez at Our Lady of the Pine parish in Conifer on April 11. He will be buried at Ft. Logan National Cemetery, alongside his beloved wife Glenys, at a later date.