In his 15 years as pastor of St. Francis of Assisi Catholic Church, Father Frank Maroney has been struck by the potential of the growing Longmont community.

“There is close to 100,000 population here,” said Father Maroney. “According to the statistics, there should be something like 20,000 Catholics in this area.

“We’ve got lots of work to do to try and get out to those who have fallen away a little bit and try to attract them back.”

St. Francis of Assisi, which now has around 1,000 registered families, has taken several steps to evangelize the faith, particularly through its brand-new church building created for parishioners and visitors to enjoy.

“It’s going to enable us to continue to evangelize and grow and bring people back into the Catholic faith,” said parishioner Mike Swedbergh.

Swedbergh, who is part of the parish’s finance committee, explained the new sanctuary will “accommodate the growing families and the people that are moving here that are going to be looking for a new church. 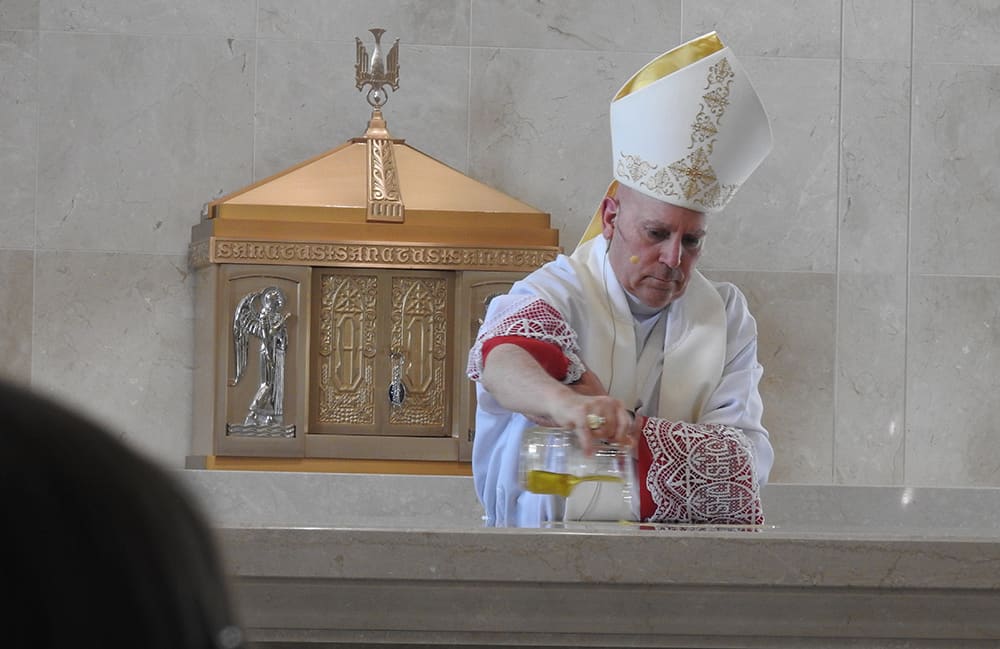 Archbishop Samuel J. Aquila blesses the altar at the new St. Francis of Assisi church in Longmont during a dedication ceremony June 19. (Photo by JoAnn Beldt)

“It gives us the capacity to take care of all those people now,” he said.

The new building was a long time in the making. St. Francis, formerly called Spirit of Peace, initially shared a space with a Presbyterian church before it moved to an office building after experiencing significant growth.

“That became the stepping stone for beginning the process of planning and raising the money for the first phase of the church,” said Father Maroney, who recently retired.

Ray Falce, who has served as chairman for the parish counsel and played a major role in fundraising for the parish, has witnessed parishioners’ excitement surrounding the new building throughout the construction process.

“They always wanted to sneak in and climb under the construction line,” he said with a laugh. “Once they saw the dedication on Wednesday night, the church was packed. They were just overwhelmed with what we did.”

Those who were close to the project have been inspired by the parish community’s efforts to make the building happen. 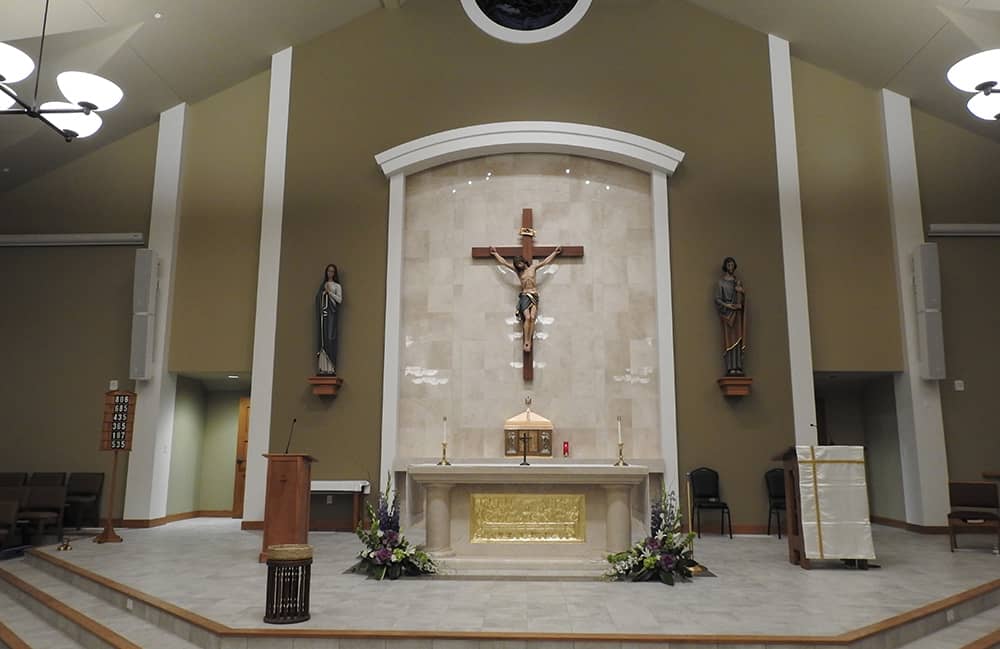 A view of the new altar. (Photo by JoAnn Beldt)

“When you think back on all the things that have happened with St. Francis of Assisi in Longmont, it’s a testament to the effectiveness and the work that Father Frank did and the prayerful community that we have here,” said Swedbergh.

“To see people come together and have the ‘can-do, will-do’ kind of attitude and the commitment toward the future of the Longmont community and the next generations is very fulfilling.

“Everybody in the parish should be really proud of the work that they’ve done and very grateful to God for helping us to get through the whole thing,” he said.

Falce is “honored and blessed” to have been a part of the parish’s milestone accomplishment.

“From my perspective, we’re building this larger church for the future,” he said.

“A lot of people made sacrifices here,” he said. “I’ve really grown to appreciate this community. They’ve helped me to grow deeper in my faith.”

COMING UP: Flocknote makes it easy to sign up for Mass and more

Flocknote recently launched a Signups feature that makes it easier than ever to create sign up forms. It’s especially helpful right now as parishes require parishioners to sign up to attend Masses, but it can be used for much more than that. If you’re a Flocknote user, check out the video above for tips on how to use it.

If you’re not already signed up for your parish’s Flocknote account, be sure to ask how you can start getting crucial parish communications!