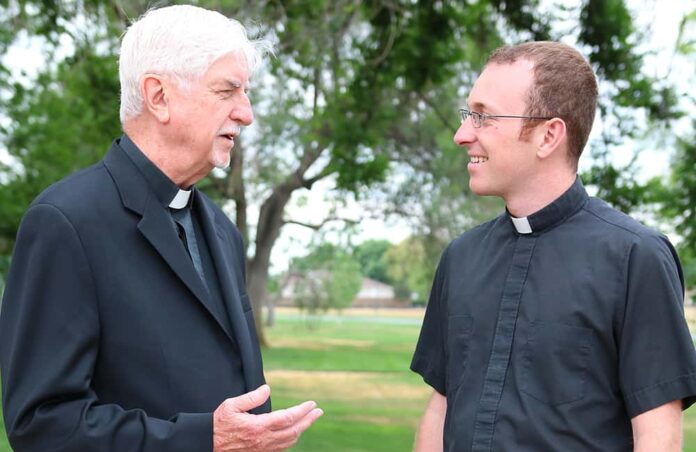 There’s a joke about religious work that goes, “The pay is poor but the benefits are out of this world!”

That may be true, but it’s little relief for the retirement years—particularly for priests. Sadly, after giving a life of service—usually 40 or more years—to the faithful, priests retire, typically at age 70, and sometimes find they can’t afford a place to live—particularly in Denver, where housing costs have soared the last several years.

“Our priests have helped nurture us spiritually throughout their lives, providing the sacraments and all that a priest does,” said Keith Parsons, chief financial officer for the Denver Archdiocese.

“Although they have a nice retirement pension,” he added, “It’s not sufficient to pay for an appropriate place in our city. The cost of housing, especially senior living in Denver, is very expensive.

“This will be an opportunity for retired priests to have a subsidized place to live, located on a beautiful, spiritual campus.”

Currently, Parsons said, retired priests may live in a rectory, as availability permits, or depending on their finances, may buy or rent a place of their own. (When necessary, due to advanced age or declining health, some may enter an assisted-living senior home.) Prophet Elijah House will provide a much-needed alternative, particularly as baby-boomer priests retire.

“There’s just under 40 retired priests today,” Parsons said. “But on average, about five men per year are expected to retire over the next several years.” Named after the Old Testament prophet Elijah, the two-story, 24,150-square foot facility will have a dozen independent living suites and two guest rooms (for visitors or priests recovering from medical procedures). It will also offer communal areas to aid fraternity, including a chapel, community kitchen, dining area, workout and rehab room, and an entertainment center with reading and conversation areas.
Construction started on the facility in July and is expected to be completed next August. Architectural firm is Eidos Architects; builder is Krische Construction.

The architecture will mirror that of the elegant Renaissance revival buildings currently gracing the century-old St. John Paul II Center campus, which is home to the archdiocese’s two seminaries and chancery offices.

The name, Prophet Elijah House, aims to pay tribute to the life and ministry of the priest, who fulfills the modern-day role of the prophet to serve as an intermediary for God and point the way to salvation, Parsons said.

“It reflects men of knowledge and experience and wisdom,” he said. “There’s been a desperate need to give back to our priests who gave their lives to our archdiocese.”

About half the facility’s cost has been provided by donors who want to make such a home possible, Parsons said. The archdiocese is seeking donations to cover the remaining half.

“We are still in need of generous donor contributions to help complete the project,” he said.

It seems fitting that the site where many of the archdiocese’s priests studied for the priesthood is where many of them will also spend their golden years, and that young men in formation at the seminaries today may look forward to returning there in their retirement.

“Men who are in active ministry now can begin to think, ‘Oh, this is an option!’” said Father Randy Dollins, V.G., moderator of the curia.

One retired priest, ordained in the 1960s, who recently visited the St. John Paul II Center, was astonished to see that ground had actually been broken for a priest retirement center, which has been a desire among priests and laity alike for decades, Father Dollins said. “He just said, ‘Wow!’” Father Dollins said with a chuckle. “The entire time he’s been a priest [a retirement center] had been rumored but never happened. Our hope is that if it’s successful, we can replicate it in another location for another 10 or 12 men.”

The home will be open to retired priests, preferably incardinated in the Denver Archdiocese, who require no or minimal nursing care, Parsons said.
“This is an option for those men who are still in the prime of their life who want to be able to afford a nice place to live and don’t need assisted living support,” he said. “It’s a place where they can enjoy comfortable, fruitful days in their retirement.”

To donate: See website above or contact Beth Chatterton with The Catholic Alliance at (303) 867-0620 Beth.Chatterton@TheCatholicAlliance.org or Keith Parsons at 303-715-3258