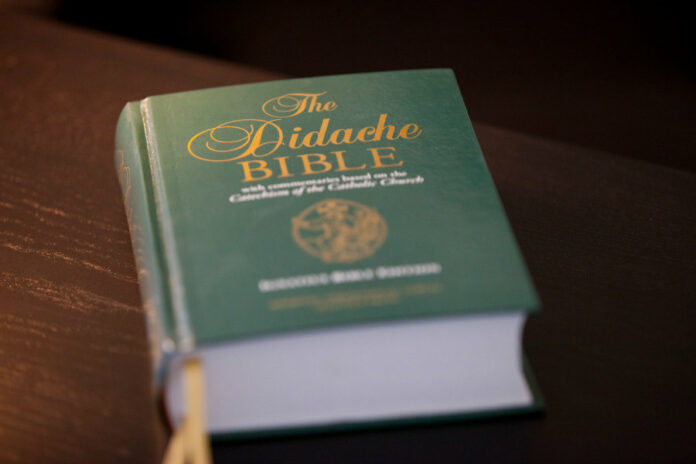 The Didache Bible is a complete Bible (RSV-CE, Ignatius edition). It includes commentary based on the Catechism of the Catholic Church, as well as 105 apologetical explanations, a comprehensive list of Biblical terms, and a topical index, among other features.

Father Andreas Hoeck, associate professor at St. John Vianney Theological Seminary, served on the editorial board for the Bible. John LaBarbara, chief operating officer of ENDOW (Educating on the Nature and Dignity of Women), Vice President of Operations for FOCUS (the Fellowship of Catholic University Students), and adjunct professor at the Denver Catholic Biblical School, edited the apologetics section.

LaBarbara said that he and the other editors hope The Didache Bible will help the laity fulfill their mission.

He said he hopes  the laity “will understand their faith and be able to explain it to others simply and concisely, and be able to answer that call of 1 Peter to ‘make a defense’ with gentleness and reverence, where they can just clearly explain the  primary teachings of the Church and enable others to come in [to communion with the Church].”

“He [Socias] had a dream back then, of writing a commentary on Scripture that actually brought the relevant parts of the catechism into the text right there and talked about and applied it, and brought in the Church Fathers as well, since the catechism is so full of those,” LaBarbara said.

The mission was simple. The catechism is full of Scriptural references, however, there was nothing that offered a Bible annotated with references to the catechism.

“We want to show, through the catechism, that this is all one–the Magisterium, the teachings, are the same thing. They aren’t in conflict, you don’t have to reconcile them, they’re actually teaching the same thing,” LaBarbara said.

The apologetical inserts were a response to a problem both Socias and LaBarbara saw in their ministries.

“One of the things that Father Socias sees all the time in his work, and then myself as an adjunct professor at the [Denver Catholic] Biblical School, was seemingly a generation of folks who just don’t know those basic answers to the faith. In 1 Peter 3:15-16 we’re told to always make a defense to anyone who calls for you to account for the hope that is within you. So many times we would find people weren’t able to do that. They knew what they believed, they knew what the Church taught, but they weren’t able to explain it succinctly and clearly and pull in the actual teachings of the Church in a way that they could share with someone else,” LaBarbara said.

He said he was also excited to learn that Father Hoeck helped develop the commentaries.

“It’s pretty fun that two of us Denver guys were so involved in the project. It just worked out that way,” LaBarbara said.