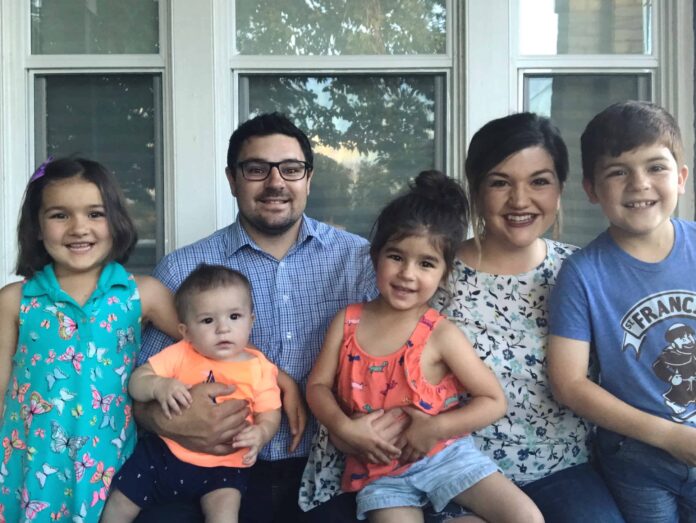 Abriana Chilelli was fed up with driving her kids home from school.

It wasn’t a mundane routine or long commute that created her frustrations. It was a van with images of exploited women parked outside Diamond Cabaret — a downtown strip club — that sat in plain sight of passersby, including Chilelli and her young children.

“There’s a lot of stuff downtown that I was able to distract my kids with for a couple weeks,” said Chilelli. “But then after a while, it was hard. It was right at a light, so it was very difficult because we would always be stopped at the light. That’s where I started to get really angry.

“I thought, ‘All I’m doing is driving home and I’m working really hard to make sure that my kids aren’t seeing this pornographic image,’” she said. “And it was a lot of work.”

Chilelli, who works at the Archdiocese of Denver’s Catholic Schools Office as the Director of Curriculum and Instruction, was upset by the degrading portrayal of the human body.

“We work really hard to teach our kids that your bodies are beautiful and they have meaning and they’re worth something,” she said.

Chilelli’s nine-year-old son started to ask his mom why she always tried to distract them at that particular light. He asked her if it was because of the van.

When she said yes, he replied, “Yeah, it just doesn’t look good.”

“He couldn’t articulate why,” said Chilelli, “but that sense that he had that it doesn’t look good and it doesn’t look beautiful was very clear for him. I was proud of him for being able to distinguish that.”

Chilelli changed her route to avoid the van, but it added 15 minutes to the commute. Between that and her son noticing the vehicle, she knew she had to act.

“It impacted me and made me upset for my son, but also for my daughters,” said Chilelli, “that they would start to think that their bodies might be for some sort of exploitation that was very apparently happening on that van.”

Chilelli reached out to the local police, who told her they were aware of the van but that it didn’t violate any public indecency laws. She then wrote to her city councilman and was referred to the councilman in the district where the van was parked.

“I didn’t expect anything to happen because I figured nobody would care,” said Chilelli.

But she did get a response, and although it wasn’t exactly what she was hoping for, it got the van moved.

It turns out the van’s location was in violation of a zoning code, which says you can’t have a parked vehicle advertising outside of your business, and Diamond Cabaret had to move the van to the back of the building — out of sight from regular street traffic.

“While I’m disappointed the code wasn’t protecting people from seeing the exploitation of people’s bodies,” said Chilelli, “it at least got rid of it.”

The experience reminded her that it’s worth it to stand up for the dignity of the human body, even if you don’t expect a positive result.

“When we look at all kinds of things that are happening in our culture with our understanding of what human sexuality is for and what our bodies are for, I can feel super overwhelmed,” said Chilelli.

“It can feel very much like swimming upstream — trying to raise children in this culture and trying to help them understand what we know from our faith is true about our bodies,” she said.

“This made me feel like actually I don’t have to feel so overwhelmed, that there are concrete steps I can take.”

Chilelli hopes the experience will one day inspire her own children to fight for their beliefs.

“I hope that they can see it as a message for them, too, that they don’t have to simply conform to what inevitably will be 10 times worse for them when they get to be teenagers or adults themselves,” said Chilelli.

“What’s true about the body will continue to be true, and that will become even more important as they grow up,” she said.