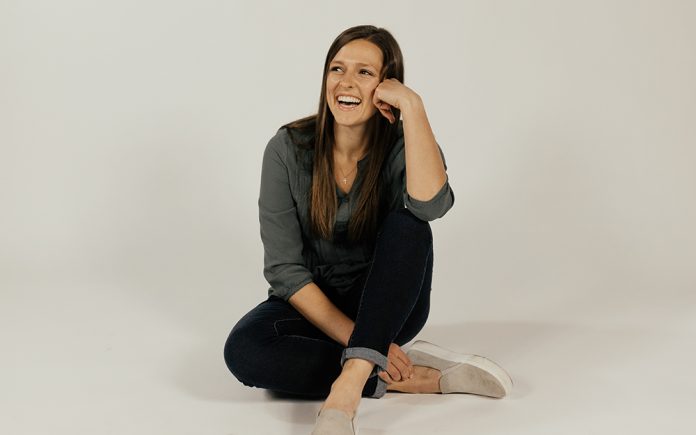 What if God opened the door for you to live your childhood dream?

That’s exactly what’s happening for Brittany Beck, a local musician who has found opportunity after opportunity to showcase her talent, passion and dream.

“I remember as a kid I would always pretend that I was on stage all the time,” Beck told the Denver Catholic. “I’ve always loved music my whole life. I always wanted to sing.”

That desire was realized in a small way through piano and voice lessons as a child, but it wasn’t until Beck was a missionary in South Dakota that it began to take shape. Having never played the piano in front of others, Beck found herself leading praise and worship for the young adult community, first with a friend, then by herself.

“I was terrified,” Beck shared. “I could sing in front of people all day long, but I did not play piano in front of anybody. It was just kind of being forced outside of my comfort zone where I learned to lead praise and worship. I wasn’t really trying to do anything with music.”

But God clearly had other plans, Beck realizes now. While beginning to look into recording a song or two with a donation given her by a friend, she mentioned the project to an acquaintance, including the cost for a full album, $6,000. Much to Beck’s surprise, she found a check in her mailbox for the full amount.

“I was like, ‘oh shoot!’” Beck shared. “Now I have two weeks to get ready to record a whole album. I had never recorded anything in my entire life. I had no idea what I was doing. But I guess it was part of God’s plan, because I recorded a whole album in five days, and I had a month to prepare for it.”

Her debut album, “Calling Me Deeper,” was released in 2021, and can be found on all the major streaming services. She also released a new single titled “Unbreakable” earlier this year. A follow-up to “Calling Me Deeper” is in the works, and she continues to perform locally and around the country.

“Clearly,” she continued, “I’m just going to take this as a sign that I’m supposed to be doing something with this, because it just kind of fell in my lap and doors open. I think I’m just continuing to do that, just trying to ask God to show me where he wants me to go with it.”

God’s hand in all of this unexpected success and resonance is clear to Beck, who shared that she’s humbled to be able to “communicate my human experience, definitely influenced by my Catholic worldview, my Christian worldview.” In this apostolic age, communicating from this worldview is of the utmost importance for others to come to know and love Jesus, as Archbishop Aquila has mentioned often.

“I think,” Beck continued, “that [my Christian worldview] will always be expressed in the things that I’m talking about, and singing about, and writing about. But also, I really have a desire to reach people that aren’t explicitly Christian. I just want people to be able to listen to my music and for it to be able to start good conversation. And I think it leads to some really fun conversations.”

Inspired by Scripture, prayer and the Mass, among other pieces of her human experience, Beck continues to write and compose songs. Her success in her music is growing, too, with local FM radio featuring one of her songs recently.

For the time being, though, Beck is continuing as normal. “I’m just Brittany,” she shared. “I love to sing. I love to write music. I like to hike fourteeners. I like people. Not that my identity is in these things… I’m 28 and just taking it one day at a time.”

André Escaleira, Jr.
André Escaleira is the Digital Media Specialist for the Archdiocese of Denver. Originally from Connecticut, André moved to Denver in 2018 to work as a missionary with Christ in the City, where he served for two years.
RELATED ARTICLES
Catholic News Agency