Unanimous win for Little Sisters of the Poor at Supreme Court 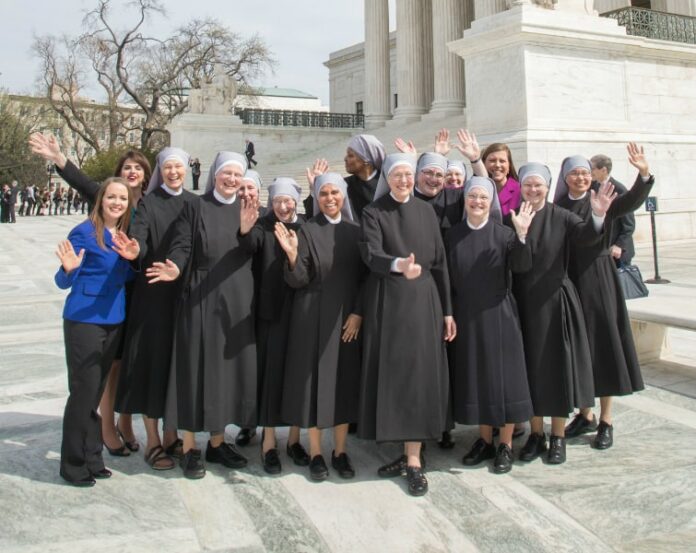 “All we have ever wanted to do is serve the neediest among us as if they were Christ himself,” said Sister Loraine Marie Maguire, mother provincial for the Little Sisters of the Poor. “We look forward to serving the elderly poor for another 175 years to come.”

Read here: “The Little Sisters of the Poor Just Beat the Obama Administration at the Supreme Court” (National Review)

“This is a game-changer.  This unanimous decision is a huge win for the Little Sisters, religious liberty, and all Americans,” said Mark Rienzi, senior counsel at The Becket Fund for Religious Liberty. “The Court has accepted the government’s concession that it could deliver these services without the Little Sisters. The Court has eliminated all of the wrong decisions from the lower courts and protected the Little Sisters from government fines.”

Less than a week after the Supreme Court heard the case of the Little Sisters of the Poor in March, the Court made an unprecedented move asking both sides to provide additional arguments about whether the government could find ways to distribute contraceptives without the involvement of religious non-profits and their health plans. The religious non-profits responded to the Supreme Court: “Yes.”

The government exempts 1 in 3 Americans from the HHS mandate. It also exempts large corporations such as Exxon, Visa and even the government’s own military family plan. A total of 100 million Americans are exempt from this regulation and could be eligible for coverage under the new solution chosen by the government.

“The Little Sisters won, but what this unanimous ruling shows is that there was never a need for anyone to lose,” said Rienzi. “The government will still be able to meet its goal of providing these free services to women who want them—not just for those with religious plans—but for the tens of millions in exempted corporate and government plans.”

The Little Sisters’ win was also a win for other Becket clients, including Christian Brothers Services, Christian Brothers Employee Benefit Trust, Houston Baptist and East Texas Baptist Universities, Reaching Souls International, Truett-McConnell College, and GuideStone Financial Services of the Southern Baptist Convention. Other parties in this case include Geneva College, Southern Nazarene University, the Roman Catholic Archbishop of Washington, and the Most Reverend David A. Zubik. All of these clients also had the adverse decisions in their cases vacated and sent back to the lower courts.

Paul D. Clement of Bancroft, PLLC presented the oral argument before the U.S. Supreme Court. Noel J. Francisco of Jones Day also presented arguments on behalf of several other ministries. The Little Sisters of the Poor are represented by the Becket Fund for Religious Liberty, Locke Lord LLP, and Professor Kevin Walsh of the University of Richmond Law School.

For more information about the case, visit www.thelittlesistersofthepoor.com

For more information or to arrange an interview with a Becket Fund attorney, please contact Melinda Skea at media@becketfund.org or 202-349-7224.  Interviews can be arranged in English, Chinese, French, German, Portuguese, Russian, and Spanish.