Moisés Martin, a member of the young adults group at Queen of Peace Parish in Aurora, will be personifying Jesus at the bilingual Via Crucis (Way of the Cross) play traditionally performed on Palm Sunday.

“[This role] helps me deepen in his passion and imagine his way to Calvary,” Martin told the Denver Catholic.

This is the first time Martin will play the role of Jesus, whereas in previous years he was involved in the logistics of the Via Crusis. Practice is twice a week, and Martin uses that time as a moment of prayer to Jesus, saying: “Lord, you have lived this [Via Crucis] for me, I am just acting.”

In the days leading up to Holy Week, while going through the 14 stations — from Jesus’ condemnation to death to the place of his body’s rest in the sepulcher — Moises’ experience helps him “to deepen what [Jesus] lived, to take it more into account, and to respect him more for what he did for us.” 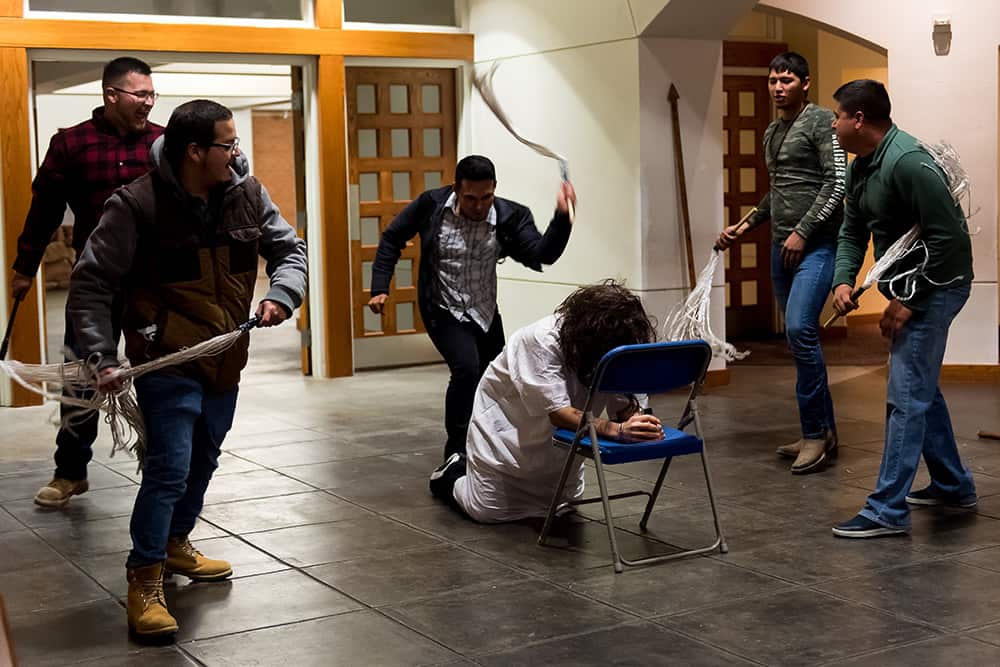 Moises Martin, wearing white, portrays Jesus in a rehearsal for the Living Stations of the Cross at Queen of Peace Catholic Church on March 15, 2018, in Aurora, Colorado. (Photos by Anya Semenoff/Denver Catholic)

An encounter with God

Martin is originally from Jalisco, Mexico, and has lived in the U.S. for four years. Two years ago, he experienced a moment of conversion that led him to an encounter with God’s love that changed his life.

At the beginning of this process, Moises was very focused on his “fear” of God, and on his fear of hell, which he sees as something horrible. “I do not want to get there,” he said.

He began to learn about and come to a deeper understanding of the promises of God. “He wants us to be happy,” he affirmed. He took the most powerful spiritual tools, the rosary, and simple prayers and asked God to allow him to overcome the evil and sins within him.

“I felt peace and an immense happiness,” the young actor said. “I looked around and I felt that had God heard my prayers and freed me. [He] touched my heart.”

Thus, God with his grace “transformed my weakness into purity, many things changed, both in my heart and in my thoughts.” For this reason, he believes that “the Holy Spirit will be present and will lead me to the cross and to the sepulcher to be resurrected with Him.

I would like to feel at least some of the suffering he felt, so I can deepen more in this role [as him].”

A moment of prayer

For Moises, the days of Holy Week “are beautiful days” for which “we must prepare ourselves with prayer, penance and fasting.” He feels that the spiritual base to take advantage of these holy days consists of “deepening in prayer,” and he recommends “reading and contemplating passages of [the Lord’s] passion in the gospel,” which he said is an opportunity to delve into the mystery of “how Jesus triumphantly entered Jerusalem and then gave his life for us.”

After his conversion journey, Moises considers that his participation in the living Via Crucis at his parish goes beyond mere performance and becomes a moment of prayer.

“I know that Jesus suffered much more,” he said. “I would like to feel at least some of the suffering he felt, so I can deepen more in this role [as him].”

How to pray the Via Crucis

In addition to procession on Good Friday or any other day of Holy Week, the faithful are also welcome pray the Via Crucis in their home at any time of the year, meditating on the Stations of the Cross. For each station, the faithful should pray: “We adore you, O Christ, and we bless you because by your holy Cross you have redeemed the world.” Then, an Our Father, Hail Mary and a Glory Be should be prayed.

These are the 14 Vía Crucis stations: