His Church. Our Experience.
Subscribe
HomeLocalLetter: The 'Ol' Gully Ranch Homestead,' Mother Cabrini, and the miracle at...
Local 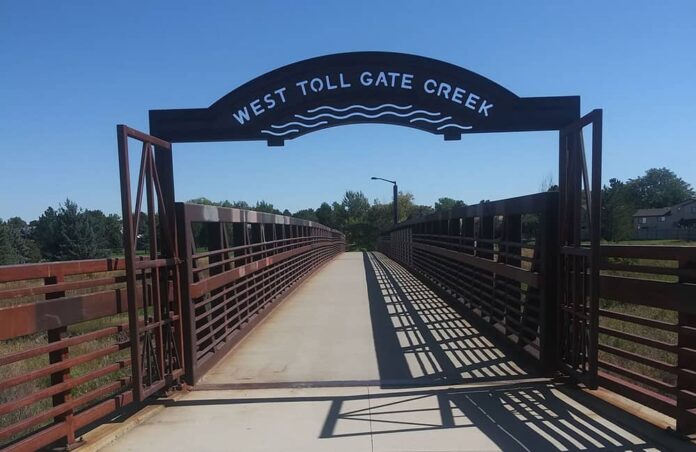 Thomas and Temperance Gully, along with their four children, left their beloved Tipperary, Ireland, back in 1862, bound for the land of promise, America! The potato famine that had devastated their country had driven young and old alike to find a new life in a new world. They came on a Sailing Vessel, which took about one month to cross the Atlantic. They rode below deck with many other families, not knowing what lay ahead. They arrived in New York, but their hearts were set on going to the open space of the West.

Thomas, along with other relatives, joined the many Irish immigrants that worked the Leadville Mines. But, after doing this kind of work for about four years, Thomas hankered to have their own ranch, and heard that the rich high plains grassland were perfect, in what is now known as Aurora.

(Colorado was still a Territory back then, and folks could “claim” land that they could take care of as their own land. Thomas, along with his two brothers, had claimed about 11,000 acres from Toll Gate Creek west to Havana. Later, when Colorado became a state, families were only allowed 160 acres per family.)

They settled on their ranch that would now be known as Mississippi and Chambers Roads. They built themselves a dugout home on the side of a hill, and later added a barn right by the dugout for their livestock. They lived there for quite a while. They later built a small log home nearby Toll Gate Creek.

John Gully grew up and married the local school marm Elizabeth Clifford. When they married, John built “The Ol’ Gully Ranch Homestead,” where they raised five children. Mary (called Mamie) the oldest, James (Jim), John, William (Bill), and then came Elizabeth Gully. the youngest. Later, Mamie would also become a school teacher and married John O’Brien, who had come to work for her dad at the ranch. Yes, he married the rancher’s daughter!

I’d like to share an important story that Betty told me of when Mary (Mamie) was a little girl, and religious sisters/nuns came to their ranch and the neighboring ranches to beg for food and donations for “The Queen of Heaven Orphanage in Denver.” Their grandma said, “Mamie, go with the sisters and show them the easiest way to get to the Kennedy’s Ranch.”

Soon after Mother Cabrini’s visit, a true miracle happened, as Toll Gate Creek became “live water” and has been ever since. The family was always grateful to Mother Cabrini for this miracle.

Folks today, who cross the Toll Gate bridge, would never know about this if we didn’t share it with them. Maybe they should rename the bridge in honor ofMother Cabrini? (Mother Cabrini was later canonized a Saint in the Catholic Church).

After her great-grandparents died of natural causes, her grandfather John Gully took over the ranch. John raised mostly Morgan horses for team work, because everything back in those days (late 1800s) had to be delivered by horse and wagon. It was at that time that their brand, The Diamond Bar, was secured and is still used today. They prospered and did well … and then the Great Depression hit in the late 1920s and early ’30s. Actually folks were having hard times up until the ’40s until the war hit.

Elizabeth Gully married Ed Mann in 1933. He was a friend of her uncles. He worked at City Park Dairy delivering milk. Betty was born in 1934. Her parents separated early, but Betty remained on the ranch and was raised by her mom and her three bachelor uncles.

It was Betty’s Uncle Bill who had the idea to have rodeos start up in the early 1940s at the Gully Ranch. Uncle Bill spearheaded it, and his brother’s, Uncle John and Uncle Jim helped run it. They’d advertise the rodeo by having colorful flyers made up at a print shop which gave location and admission charge of one or two dollars. Eight-year-old Betty, along with her mother and uncle, would go to the outlying towns, like Littleton. She definitely remembers going around Colorado Boulevard and Alameda, where they would let her out at one end of town, and she’d go to all the shops, and put up flyers.

The Jolly Family also had The Deer Trail Rodeo during that same period of time, and the Gullys and the Jollys would make sure their rodeos were on different dates. They shared each other’s rough stock for both rodeos. It was a nice working relationship.

Buckley Field was located just north and east of the ranch and all the fields were open then, so the soldiers would walk across the open fields to get to the rodeo where they would enter as contestants. This was a good outlet for them during wartime (WWII).

There was an older man that lived just west of the Gully Ranch, and he had a team and wagon. He talked to her uncle before the rodeo one summer, saying “I think I have a buckin’ hoss. Now I really believe, cuz … I tried to break this hoss for another team … and all he’d do was buck and couldn’t do anything with him! If you just put a halter on him, he was fine. Can I bring him out the day of the rodeo and we’ll see if he can buck?”

Well, he drove his wagon out with the horse tied to the back of the wagon, and sure enough, they bucked him out, and he turned out to be a real good buckin’ hoss. The ol’ guy went home without him, and he stayed on as a buckin’ hoss. Steiner Contractors from Weatherford, Texas, would come to see local buckin’ hosses. and they bought two or three horses from our rodeo stock, and I think he was one of them.

When Casey Tibbs was just a young cowpoke, he rode both saddle bronc and bareback broncs at the Gully Ranch Rodeo. Dick Locks, who won a lot of money back in those days, also rode rough stock, mostly saddle broncs. The Ken Myers family lived about six or seven miles west of the Gully Ranch, and they’d always bring their families. Butch Myers was one of Kenny’s sons. Butch wasn’t old enough to be a contestant, but they all watched their dad calf roping. Betty says. “His dad Ken was a good roper.” (It’s sure ‘nuf in the blood, as the grandkids, Rope, Tie, and Cash Myers have gone on and done quite well, and are well known in the PRCA.) There were also local cowboys that were contestants. When Betty’s Uncle Bill passed away in 1952 or ’53, and her Uncle Jim was getting up in years, that ended the Gully Ranch Rodeo.

Uncle Jim was still living on the ranch in 1956, when John Sala came looking for some pasture for his rope mare Denver Snyder. After they got acquainted, John wanted to have some calves to rope of his own, so then Uncle Jim and John had an agreement to bring calves there to rope. It had been a few years that there weren’t any cattle on the ranch, so Uncle Jim thought it was a great idea. That is how the present herd got started.

Uncle Jim passed away around 1962. John had hoped to buy the ranch but then John’s wife Ruth passed away after a long illness, so John never did live on the ranch. John kept the Diamond Bar brand alive and well, and raised some nice herefords and black baldies.

My husband Billy and I had become real good friends with John, after buying a top notch quarterhorse brood mare, Bella Sundown from him in the 1960s. We’d go out to the ranch where our kids would love to run and play and chase rabbits. John would always have some nice cold orange sodas for them in an old fridge. He would later marry Betty, and they both became like family to us.

So, when I heard the ranch was being sold because of modern day pressures, and the old homestead would be demolished, my heart sank. So, I sat down and wrote the poem “Old Gully Ranch House” about the old branding days. We all wanted to share it, and sent it into the Aurora Historical Society, along with an old photo of the horses tied to its fence. They printed it in their news flyer. When they realized it was the oldest homestead in the Toll Gate area, they also wanted to save it. With Aurora growing so rapidly in the 1970s , they wanted to save this historical site.

The O’Briens and Betty, the great-grandchildren of Thomas and Temperance, granted approval to move the old homestead to the Aurora Historical Park. It was finally moved to its present site around 1975.

Folks may go visit the Aurora Historical Park (off of Alameda and Chambers Roads) and go into the Gully Ranch Homestead, that is exactly preserved the way Betty remembers it as a kid. “The only thing that is different,” Betty says, “growing up, it was a natural wood color, and not white.” The sign at the park reads “DeLaney/Gully Homesteads.” The Historical Society wanted a natural setting. The DeLaneys’ were actually about six miles from the Gully Ranch. The DeLaneys’ huge round barn is also part of the site.

Mississippi and Chambers Roads are quite different today, and no one would ever imagine the history this land beholds. Thanks to Betty Sala (Gully-Mann) for sharing her stories with us, and Mary O’Brien-Ulmer for gathering up the photos. We can treasure the memories that this patch of Colorado Soil holds for us, that was once ranched by Irish immigrants, of days gone by.

When John and Betty married, they moved their cattle to their new ranch in Elizabeth, Colo. After John passed away, well into his 90s, in 2005, Betty continues the ranching tradition, and still has some fine cattle that wear the Diamond Bar Brand. She’s grateful to her nephew Joe O’Brien who helps her out whenever possible. She will always have cattle and is proud to say “It’s in her blood.”

We thank the Aurora Historical Society for saving the Gully Homestead. Never underestimate the power of the written word.

The roar of campfires from dawn ti! dusk.

Range cows a circlin’ in clouds of dust.

The cry of calves could

be heard from afar.

As they were put to the iron of the diamond bar.

On Sundays they’d ride in from everywhere.

Children’s voices echoed inside your walls.

Horses tied to your fence, hot coffee for all.

But, new times and progress must take it’s toll

And you must go,

for they’ll be a new road.

But when you finally are no more

Who will know … You ever were?

Just in our hearts, your mem ‘ry will live

And tales of good times … You still can give.