Let’s not make a deal…at least this deal 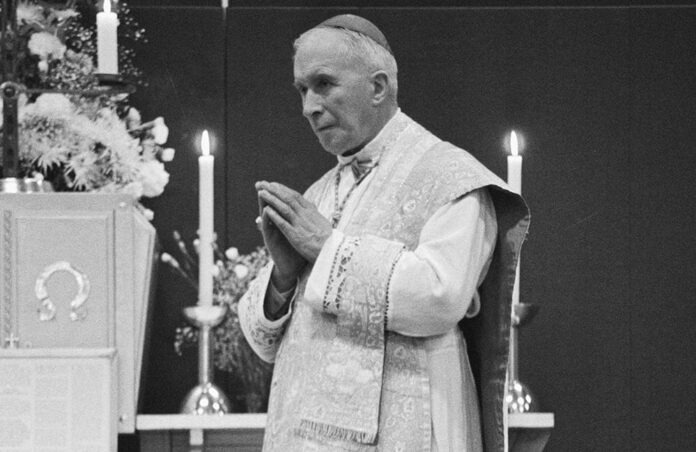 Helping those who have broken away from the Catholic Church come back into full communion is a noble endeavor. But such reconciliations cannot be conducted as if they were the ecclesiastical equivalent of labor negotiations: you give a bit here, we’ll give a bit there. For the only Church unity worthy of the name is unity within the full symphony of Catholic truth.

Which brings us to the rumored reconciliation between the Church and the followers of the late French archbishop Marcel Lefebvre. While the Lefebvrists’ complaints about the post-Vatican II liturgy are often thought to be at the heart of their schism, the more fundamental break-points involve the Council’s teaching on the fundamental human right of religious freedom and the Council’s embrace of ecumenism and interreligious dialogue – including the conciliar affirmation that there are elements of truth and holiness in other Christian communities, and indeed in non-Christian faiths.

Now, according to Archbishop Guido Pozzo, a senior Vatican official involved in discussions with the Lefebvrists, it may be possible to heal the breach Archbishop Lefebvre created by conceding that the teachings of Vatican II do not have the same doctrinal weight. On this scenario, the Lefebvrists would be given a pass on the Council’s affirmation of religious freedom, ecumenism, and interreligious dialogue, and would return to full communion through the mechanism of a “personal prelature,” the same structure that governs Opus Dei.

This is a very, very bad idea.

The Church teaches the truth of the Virgin Birth and the truth of Mary’s Immaculate Conception; both doctrines are true, but the Virgin Birth is closer to the Paschal Mystery than the Immaculate Conception. Similarly, Vatican II taught that divine revelation is real and that religious freedom is a fundamental human right. The reality of divine revelation is a truth closer to the center of the faith than the truth that religious freedom is a right of persons that should be recognized in law; but both are true.

Following the lead of Archbishop Lefebvre, the clergy of the Priestly Society of St. Pius X (SSPX) – the ordained members of the Lefebvrist movement – have long claimed that what the Council taught on religious freedom is false because it contradicted settled Catholic teaching – a claim that has more to do with the agitations of post-1789 French politics than with a serious account of the history of Catholic church-state doctrine. The ground of the SSPX’s rejection of religious freedom is of less importance than the fact of it, however. To restore SSPX clergy to full communion with Rome while letting them cross their fingers behind their backs on religious freedom (and ecumenism) when they make the profession of faith and take the oath of fidelity would, by a bizarre ultra-traditionalist route, enshrine a “right to dissent” within the Church.

And that would make for shipwreck. Such a “right” of “faithful dissent” has long been claimed by Catholic progressives, not least with respect to Humanae Vitae, Paul VI’s encyclical on the appropriate means of regulating fertility, and Ordinatio Sacerdotalis, John Paul II’s apostolic letter reaffirming that the Church’s authority to ordain extends only to men. Claims to “faithful dissent” have always been rejected by the Church’s highest teaching authority.

To make a deal with the SSPX and the Lefebvrist movement on Archbishop Pozzo’s premise – that this new personal prelature would be conceded a right to reject certain teachings of the Second Vatican Council – would be to make the symphony of Catholic truth discordant rather than melodic. It would validate even more dissent on the Catholic Left. It would reinforce the notion that doctrine is not about truth, but about power.

And in doing all of that, it would immeasurably damage the New Evangelization.