His Church. Our Experience.
Subscribe
HomeLocalLessons in Hope: the final panel of the 'John Paul II Triptych'
Local

Lessons in Hope: the final panel of the ‘John Paul II Triptych’ 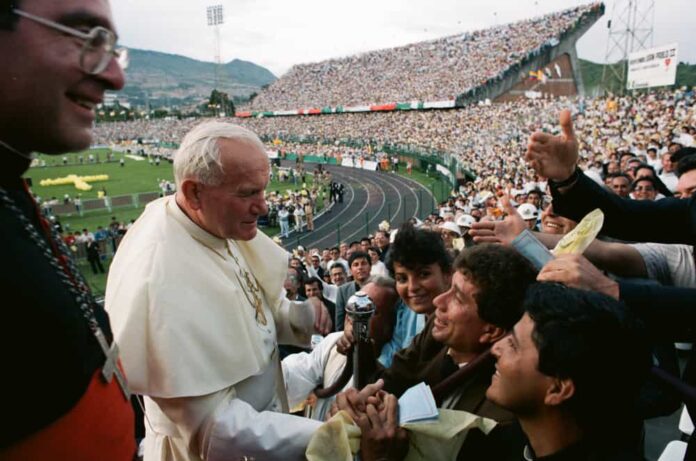 A triptych is a picture, or more commonly an altarpiece, that appears on three panels, though meant to be understood as a single composition.

The term can also be applied to other types of art, as Saint John Paul II reminded us in 2003 with the publication of his triptych of poetry titled Roman Triptych: Meditations.

Now George Weigel, biographer and longtime friend of John Paul II, has completed what he refers to as the “John Paul II Triptych.” His newly released biography Lessons in Hope: My Unexpected Life with St. John Paul II (Basic Books, 2017), completes the first two best-selling “panels”— Witness to Hope (1999) and The End and the Beginning (2010).

In the following interview, Weigel speaks about what sets Lessons in Hope apart from the other two biographies of the Holy Father—it’s the stories!—and what must be done to ensure the legacy of John Paul II is not forgotten.

Q: How did you first meet John Paul II? Was there anything remarkable about that meeting that would have led you to believe that you were to have a long friendship with a future saint?

George Weigel: As I tell the story in Lessons in Hope, my first real conversation with John Paul II was in September 1992 when I presented him with a copy of my book, The Final Revolution: The Resistance Church and the Collapse of Communism, which he had previously read in galleys. I think he appreciated the book, not because I had made him the hero of the story, but because the book suggested a way of interpreting history that was parallel to his own: over the long haul, culture is the most dynamic force in history, not politics and not economics. In any event, he asked me to stay in touch, and I did, although I had no idea in 1992 where that would lead.

Q: You say that there is much still to learn from John Paul II, but is our fast-paced world already forgetting the legacy of Pope John Paul II? How can we counteract that?

Weigel: I find it astonishing every summer, when I teach in Cracow, that I have to teach Polish students the modern history of their own country and the Church’s heroic role in besting both Nazism and Communism. Regretfully, I’ve come to expect that lack of historical perspective from my American students, but that Poles don’t know this story tells you something about the fragility of historical memory. The only way to counteract this problem is to, well, counteract it: preaching and teaching the magisterium of John Paul II as the authentic interpretation of Vatican II that set the Church on the road to the New Evangelization. Of course, I also think it would help if people read my books, too! Perhaps Lessons in Hope, which I think of as a very user-friendly book of stories and anecdotes, will help introduce this great figure to those for whom he is only a vague memory—and entice them to read “Witness to Hope” and “The End and the Beginning”!

Q: Denver is set to celebrate the 25th anniversary of John Paul II’s visit to that city for World Youth Day in 1993? How important was that visit for the United States, and for John Paul II?

Weigel: He loved it, and he loved to talk about it, because he had been told it couldn’t be done (not least by a lot of U.S. bishops), and as I tell the story in Lessons in Hope, he proudly proclaimed at our last dinner, when speaking of WYD 1993, “I proved them wrong!”

I’m quite sure that WYD 1993 was a turning point for the Church in Denver, which is now a model New Evangelization diocese. And I think it had a great ripple-effect throughout the United States. Various projects of youth ministry, including campus ministry and marriage preparation ministries, trace their origins to WYD Denver.

And then of course there are the multiple vocations—to priesthood, consecrated life, and marriage—that were inspired during those remarkable days. So the whole Church in the United States owes a great debt of gratitude to Denver, to Cardinal J. Francis Stafford (who had the courage to try what others said was impossible), and of course to St. John Paul II.

Q: In the 1990s, we used to speak about the John Paul II generation, those young Catholics who were inspired by John Paul II to live authentically Catholic lives. Where are they now, and what has been their effect on the Church in the United States, and in the world?

Weigel: They’re everywhere, and you find them where the Church is living and vibrant throughout the world. The acids of post-modern relativism are very powerful, but wherever you find a living Catholicism, it’s a Catholicism that has embraced the magisterium of John Paul II and is living it joyfully and evangelically, sharing the gift that we’ve been given. The dying parts of the Church are the parts still stuck in the quagmire of Catholic Lite.

Q: For a young millennial who didn’t have the opportunity to live during the time of John Paul II, where would one begin in getting to know the Pontiff?

Weigel: Well, perhaps I could suggest beginning that exploration by reading Lessons in Hope! The whole intent of the book is to introduce John Paul in an accessible way, through stories.

Q: Is there one anecdote about John Paul II that you seem to tell more than any other?

Weigel: As I mention in Lessons, he once said to me, speaking of other biographies, “They try to understand me from the outside, but I can only be understood from inside.” It wasn’t an angry or bitter remark; it was almost wistful. But it was a powerful reminder that everything he accomplished, in the Church and in the world, was the fruit of his prayer, and I tried to keep that in writing the three panels of what I now think of as my “John Paul II Triptych”: Witness to Hope, The End and the Beginning, and now Lessons in Hope.