Lessons from the improbable Scalia-Ginsburg friendship 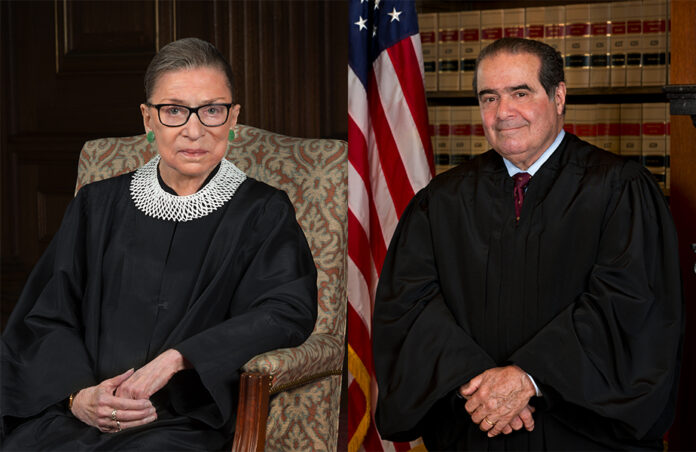 The death of Supreme Court Justice Antonin Scalia in 2016 sent powerful shockwaves through American culture that reverberated deeply on both sides of the political and ideological spectrums. Those shockwaves have been reawakened with the death of Justice Ruth Bader Ginsburg.

Justice Ginsburg died Sept. 18, after having lived an inspired life of public service. It’s tempting for some to reduce Justice Ginsburg and her life to the legal decisions and laws she upheld (or didn’t) during the 27 years she served on the bench of the Supreme Court, but doing so would be a grave disservice to her. Despite one’s consensus of what Justice Ginsburg stood for, she served her country nobly and helped to cement many notable advances for women’s rights and gender equality in our nation’s rule of law.

In a time of truly stark political division within the country, there’s a powerful lesson to be learned on both the right and the left in reflecting on the life of Justice Ginsburg and the deep friendship she shared with the late Justice Scalia.

Scalia and Ginsburg were virtual opposites when it came to their political ideologies. Scalia, a devout Catholic and father of nine children, was about as conservative and “right” as they come. Ginsburg, a fiercely liberal Jewish mother of two and an outspoken advocate of women’s rights, was a steadfast champion of the left. Rarely did they agree on the outcome of landmark Supreme Court cases, and their dissents to one another were not for the faint of heart. It would be contrary to today’s prevailing logic for them to be amicable acquaintances, let alone good friends.

And yet, they were. If Justice Scalia was still alive today, there can be little doubt that he’d kindly and poignantly eulogize his good friend Ruth Bader Ginsburg at her funeral, just as she did for him in 2016.

While eulogizing her good friend Antonin Scalia on March 1, 2016, Justice Ginsburg shared an “indelible” memory of the late Justice Scalia from Dec. 12, 2000, the day Bush v. Gore was decided.

“I was in chambers, exhausted after the marathon: review granted Saturday, briefs filed Sunday, oral argument Monday, and opinions completed and released Tuesday,” she recalled. “No surprise, Justice Scalia and I were on opposite sides.

“The Court did the right thing, he had no doubt. I disagreed and explained why in a dissenting opinion. Around 9 p.m., the telephone, my direct line, rang. It was Justice Scalia. He didn’t say ‘Get over it.’ Instead, he asked, ‘Ruth, why are you still at the Court? Go home and take a hot bath.’ Good advice I promptly followed.”

In the days following Justice Ginsburg’s death, one of Justice Scalia’s sons, Eugene, wrote a piece for the Washington Post recalling many fond memories of spending New Year’s Eve with his parents and Justice Ginsburg and her husband, Marty. The friendship between the two Justices, Eugene wrote, “was quite simple, as some of the best friendships are.”

“They worked at the same place,” he continued. “They were both New Yorkers, close in age and liked a lot of the same things: the law, teaching, travel, music and a meal with family and friends.”

On the other hand, Eugene observed that their differences were “as integral to the justices’ friendship as the similarities. She had made her mark as a pioneering advocate for women’s rights; my father was a traditional Catholic who came to prominence as a critic of activist courts. He respected what she had achieved in an era when the deck was stacked against her; from her experiences, he gained insight and depth of understanding. He liked learning and could learn from her.”

And amid all of their differences and disagreements, “Not for a moment did one think the other should be condemned or ostracized,” Eugene wrote. “They believed that what they were doing — arriving at their own opinions thoughtfully and advancing them vigorously — was essential to the national good. With less debate, their friendship would have been diminished, and so, they believed, would our democracy.”

Their friendship endured until the end of Justice Scalia’s life. Aside from welcoming differences and engaging in civil and charitable debate, the Scalia-Ginsburg friendship teaches us that as humans, we are all much more than our politics and the ideologies we stand for. Our capacity to love and be loved by our friends transcends the walls of division, perceived or otherwise.

Justice Ginsburg, like a good and true friend, endearingly shared all the things she would miss about her friend during his eulogy, because that’s precisely what they were: friends.

“I will miss the challenges and the laughter he provoked, his pungent, eminently quotable opinions, so clearly stated that his words never slipped from the reader’s grasp, the roses he brought me on my birthday,” she said.

About those roses: another of Justice Scalia’s sons, Christopher, shared on Twitter an anecdote about his father from United States Judge Jeffrey Sutton, who once asked Justice Scalia: “What good have all those roses done for you? Name one five-four case of any significance where you got Justice Ginsburg’s vote.”