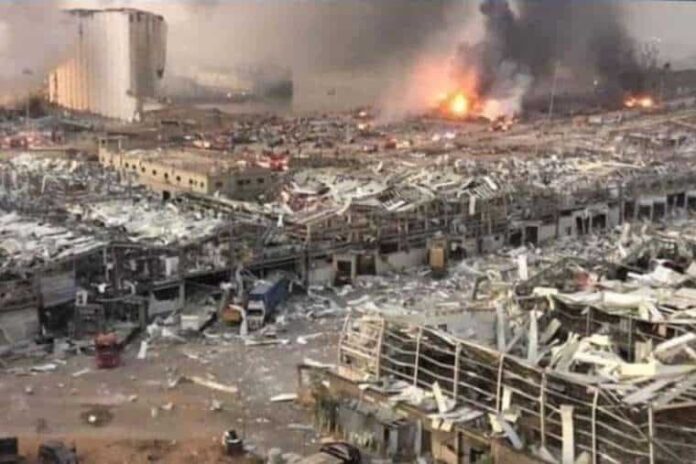 The Maronite eparchs of the United States are pleading for prayers and aid for the people of Lebanon in the wake of the large explosion in Beirut on Tuesday, August 4, as Lebanon’s bishops call for a day of fasting and prayer this weekend.

Dozens are feared dead and thousands were injured by the blast, the cause of which is still unknown. Harrowing images from Beirut show buildings reduced to rubble, and an estimated hundreds of thousands of people were made homeless by the explosion.

The explosion knocked out electricity for most of the city of Beirut. Seismic waves were felt hundreds of miles away from the blast.

The eparchs further lamented the declining civil state of Lebanon, which St. John Paul II once praised as a place where Muslims and Christians lived peacefully together, as the country faces continued widespread societal breakdown.

“This country is at the verge of a failed state and total collapse,” they said. “We pray for Lebanon, and we ask for your support for our brothers and sisters at this difficult time and in response to the catastrophe.”

The bishops requested that people “stand in solidarity with the Lebanese,” and that they are praying for an increased stability and “path of recovery toward peace and justice for all.”

The vast majority of Catholics, who make up 27% of Lebanon’s population, are Maronites.

Cardinal Bechara Boutros al-Rai, the patriarch of the Maronite church, said on Wednesday that Saturday, August 8, was to be a day of fasting, prayer, and repentance in the aftermath of the explosion in Beirut.

Cardinal Rai said that the Church “which has set up a relief network throughout Lebanese territory, today finds itself faced with a new great duty which it is unable to assume on its own,” and appealed for global aid.

“Beirut is a devastated city, Beirut, the bride of the East and the beacon of the West is wounded, it is a scene of war without war,” said Rai in his letter, titled “An Appeal to All States of the World.”

Rai also requested that the United Nations set up a special fund to assist with the reconstruction of Beirut and called on charities around the world to help Lebanese families “heal their wounds and restore their homes.”

Several Catholic and secular organizations are already on the ground assisting with the relief efforts in Beirut, including Caritas Lebanon, the Catholic Near-East Welfare Association,  Lebanese Red Cross, and Beit el Baraka.

Pope Francis appealed for prayers for the Lebanese people in his Wednesday audience on August 5.

“Let us pray for the victims, for their families; and let us pray for Lebanon, so that, through the dedication of all its social, political, and religious elements, it might face this extremely tragic and painful moment and, with the help of the international community, overcome the grave crisis they are experiencing,” he said via livestream from the Vatican.