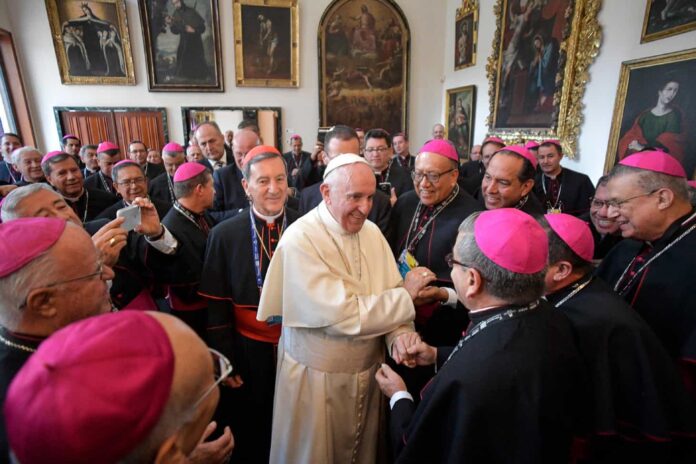 The Vatican is a hotbed of rumor, gossip, and speculation at the best of times — and these times are not those times. The Roman atmosphere at the beginning of 2019 is typically fetid and sometimes poisonous, with a lot of misinformation and disinformation floating around. That smog of fallacy and fiction could damage February’s global gathering of bishops, called by the Pope to address the abuse crisis that is impeding the Church’s evangelical mission virtually everywhere.

Great expectations surround that meeting; those expectations should be lowered. In four days, the presidents of over 100 bishops conferences and the leaders of a dysfunctional Roman Curia are not going to devise a universal template for the reform of the priesthood and the episcopate. What the February meeting can do is set a broad agenda for reform, beginning with a ringing affirmation of the Church’s perennial teaching on chastity as the integrity of love. In a diverse world Church, that teaching applies in every ecclesial situation. And it is the baseline of any authentically Catholic response to the abuse crisis.

What the February meeting must not do is make matters worse by swallowing, and then propagating, some of the fairy tales circulating in Rome about the Church in the United States: like the noxious fiction that the U.S. bishops have overreacted to what is essentially a media-created crisis.

To be sure, inept or hostile journalists too often fail to report the significant reform measures the U.S. bishops have implemented since 2002 and the positive effects of those reforms. But there is still much reform work to be done in the American Church; most U.S. bishops know that; and for Rome to blame the Church’s current crisis of confidence on the media is a reflexive dodge and an obstacle to genuine reform.

Then there’s the “Protestantization” fairy tale. In Roman circles, it’s said that panicky U.S. bishops cobbled together reform proposals that would gravely diminish episcopal authority by handing great chunks of that authority to lay people — a “Protestantizing” move, as it’s called along the Tiber. To make matters worse, some in Rome blame this alleged “Protestantizing” on what are deemed “too many” converts in the U.S. Church today.

How to begin unraveling this nonsense?

First, it is beyond bizarre for anyone to complain about too many converts in a Church called by the Pope to live “permanently in mission,” radiating “the joy of the Gospel.” In real-world 2019, American adults are baptized or enter into full communion with the Catholic Church because they believe the Catholic Church knows what it is, teaches the truth, and offers them Christ himself in the sacraments. They don’t “convert” to change the Church’s self-understanding.

Second, how does it diminish their authority for bishops to collaborate with orthodox, capable lay people in addressing the current crisis in both its dimensions: clerical sexual abuse and episcopal failure in addressing that abuse? What the U.S. bishops were prepared to do in November, before an inappropriate Vatican intervention prevented it, was to create a national body of competent lay people to receive allegations of episcopal malfeasance, assess them by a carefully crafted set of standards and report credible allegations to the appropriate Church authorities. Period. Such a process would not only preserve the bishops’ authority; it would enhance it.

In any effective organization, the leader with ultimate responsibility engages the expertise of others in order to do what only he or she can do: make good final decisions. Not a jot or tittle of episcopal authority will be damaged by the American bishops collaborating with expert lay people who understand the boundaries of lay competence. On the contrary, that collaboration is essential if the bishops — and the Vatican — are going to recover the credibility necessary to do the jobs that only bishops and the Vatican can do in reforming the priesthood and the episcopate.

These points must be made forcefully in Rome in February. Fictions about American Catholic life and American attempts to impose a universal solution to the abuse crisis on the world Church must be firmly rejected. An appropriate pastoral response to a genuine crisis, well-suited to the ecclesial situation of the U.S., should be vigorously defended. And the Roman voices saying there are too many converts in the U.S. should be invited to read Matthew 28:19-20.