A lawyer, a baker, a homemaker 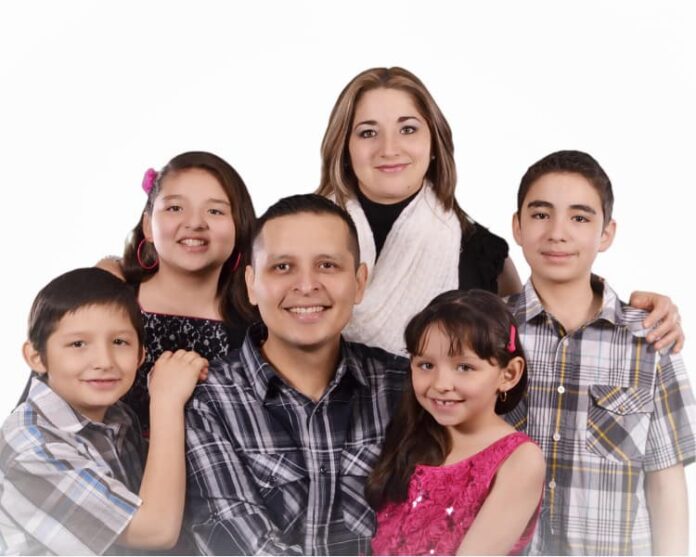 When Carlos Escobedo-Gaytan, 36, came to Denver 15 years ago, he planned to work about three months to raise money to launch a law office in his native Mexico. Taking what he anticipated to be short-term employment in the baking industry, he saved his paychecks for the new business, then about a week before he was to return, he met Gabriela Sainz-Garcia, 31.

“Gabriela and I met each other and fell in love,” he said. “Also we completely fell in love with Jesus Christ here.”

Instead of opening a law office in Mexico, he put roots down in Thornton and opened “my five offices,” he said with a laugh, referring to Gabriela, now his wife, and their four children—Edwin, Carla, Carlos, and Evangeline.

Life took another turn in 2012 when Escobedo-Gaytan was diagnosed with Neuromyelitis optica, a central nervous system disorder that occurs when the body’s immune system reacts against its own cells.

“It is a life-threatening disease,” he said. “Incurable, because of the progression.

Escobedo-Gaytan has a lesion in his spinal column and is completely blind in one eye.

“I spent a year and a half in a wheelchair because I was unable to walk,” he continued. “But with the help of God, I am walking again.”

He again sees the unexpected as part of God’s plan— and now serves his family as a stay-at-home dad, taking care of chores at the house and transporting to the kids to and from school.

“My wife and I are walking along the path that God has placed before us,” he said.

Despite the hardships, physical and in turn financial, their faith has remained strong, as well as their desire to pass the faith on to their children. The children attend Assumption School in Denver;  in eighth, seventh, fifth and first grades.

“The fact that my children could attend a Catholic school has changed our lives.” he said. “During our first few weeks at Assumption I did not stop crying because there was one surprise after another as I heard my children speak about Christ.

“It was such a gift that they were learning about him.”

Through a Catholic education, they also learn to respect themselves and their classmates, he added.

“It is an opportunity for them to learn new things that will help them in the world,” he said, “and also to grow in knowledge of God.”

When researching Assumption, the couple, unable to cover the full cost of tuition, inquired about financial assistance and found help through Seeds of Hope. SOH is a nonprofit that helps parents provide Catholic education through tuition assistance grants, scholarships and operating support. They currently support families in 11 Catholic schools that serve low-income, high-minority populations in inner-city Denver. Since inception 17 years ago, they have provided more than $24 million in assistance.

“Through this great organization, we are able to have all four of our children in this school,” he said. “Without this assistance, it would not have been possible… we thank God and Seeds of Hope for making this dream a reality for my children, my wife and me.”

Seeds of Hope recipients pay a portion of tuition, and are required to volunteer. The family volunteers with bingo, the school’s famer’s market and athletic teams.

“We have never seen this as an obligation but a great joy,” Escobedo-Gaytan said. “As the word of God says: to him who has been given more, more will be expected.”

“Our service is a way that we can pay,” he said, “helping these beautiful institutions, Assumption Catholic School and Seeds of Hope, that have helped us so much.”

To learn more about Seeds of Hope visit www.seedsofhopedenver.org or call 303-715-3127.