His Church. Our Experience.
Subscribe
HomeLocalOur Lady of Guadalupe by the numbers
Local

Our Lady of Guadalupe by the numbers 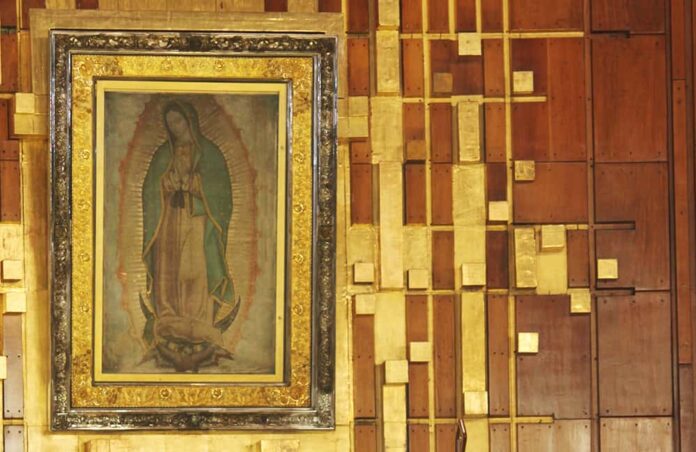 “From heaven, a beautiful morning light, the Guadalupan, came down to Tepeyac. Between the roses, on the tilma, she deigned to leave us her beloved image.”

This is a rendering of some of the lines from a popular song, “La Guadalupana,” a hymn intoned year after year in honor of our mother in heaven, Our Lady of Guadalupe. The song is popular not only at the Basilica in Mexico City where the original tilma with Our Lady’s image is kept, but also throughout the world, in celebration of the Empress of the Americas.

On the vigil of her feast, during the night of Dec. 11, thousands of faithful come to the shrine to sing to the Virgin. The plaza in front of the church is filled on this festive day with dancers in traditional, brightly-colored gowns, fervently dancing in honor of the Dark-skinned Virgin, as she is affectionately called.

Now in this month dedicated to her, we share with our readers some of the numerical curiosities associated with Our Lady.

14 – Just two weeks — 14 days — after her last apparition, a simple hermitage in her honor was already completed.

8 – A tilma like Juan Diego’s will usually last for about eight years before it starts to fall apart. The tilma Our Lady used to give us her image has endured, still in excellent conditions, for 485 years!

116 – For 116 of these years, the tilma was on display without any protection and it was unharmed. (Now it is behind glass.)

1666 – The year in which a Spanish team of art scholars determined that a surface as coarse as that of the tilma could never serve for an image painted as perfectly as Our Lady is, and that the only possible explanation for the image of the Virgin “is God.”

1785 – The year that nitric acid was spilled on the tilma and the linen wasn’t damaged. An opaque stain on the image was the only result.

1921 – In November of 1921, a man named Luciano Pérez detonated a bomb below the tilma. The bomb destroyed the altar, the candlesticks, the crucifix of the church — but the tilma was not damaged.

46 – There are 46 stars on the Virgin’s mantle, with an extraordinary coincidence between the position of the stars and the constellations that were in the sky above Mexico City on the day Our Lady left her image on the tilma.

40 – Dr. Phillip Callahan took 40 infrared photos of the image in 1979, concluding that the image cannot be credited to a human hand.

13 – There are 13 people reflected in the Virgin’s eyes, as discovered through a computer digitalization. The minuscule size of the eyes mean it is impossible that the images could have been painted.

1950 – The year that the Virgin’s eyes were examined by various international eye doctors, who coincided in finding that the image has the characteristics of a living human eye, with images known as Purkinge-Sanson images.

40,000 – There were some 40,000 victims of the plague in Mexico City in the mid-18th century. When health care authorities could do nothing to stop the epidemic, Church and civil leaders decided, with a solemn declaration in 1737, to make Our Lady of Guadalupe the principal patroness of the city, asking her to take the dying population under her protection. Soon after, the plague ceased.

10 million – This is the number of faithful who come to the Basilica of Guadalupe every year, making it the most visited shrine in the world after St. Peter’s Basilica.

Mavi Barraza contributed to this report.