Keep government out of the confessional 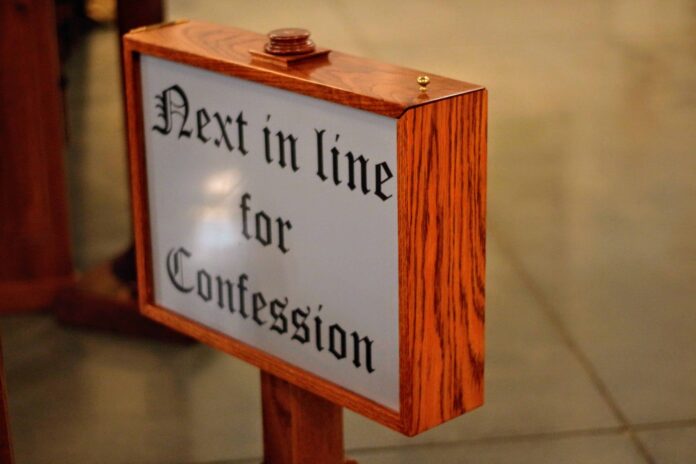 One of the most powerful moments in the sacramental lives of Catholics occurs when we walk into a confessional, lay our sins at the feet of Jesus in the person of the priest and receive God’s forgiveness. But state legislators in California are seeking to break into this sacred encounter and require priests to divulge certain sins — a development that should concern people of faith everywhere.

Just before he ascended into heaven, Jesus appeared to the disciples and said, “‘Peace be with you. As the Father has sent me, so I send you.’ And when he had said this, he breathed on them and said to them, ‘Receive the holy Spirit. Whose sins you forgive are forgiven them, and whose sins you retain are retained’” (John 20:21-23). This conferral of the power to forgive sins shows us how much Jesus loves us and wants to accompany us with his mercy.

In the confessional — or for Eastern Catholics, in front of the icon of Jesus — we experience the limitless mercy and love of Christ, who so greatly desires to be present to us in our brokenness that he gave priests the authority to forgive sins.

When we go to the sacrament of reconciliation, Jesus offers his unconditional forgiveness to those who are repentant. The sins we confess are spoken to Christ in the person of the priest and are swallowed up by his mercy. Therefore, priests are required to maintain absolute secrecy about anything revealed during confession.

The Code of Canon Law clearly states: “The sacramental seal is inviolable; therefore, it is absolutely forbidden for a confessor to betray in any way a penitent in words or in any manner and for any reason” (Canon 983.1). If a priest directly breaks this trust, he is automatically excommunicated and cannot be restored to the Church, except by the Pope himself.

The California legislature is currently considering Senate Bill 360, which would require priests to disclose sins of sexual abuse that they hear in the confessional. As my brother bishop, Archbishop Jose Gomez of Los Angeles has stated, this is “solving a crisis that doesn’t exist.”

Archbishop Gomez notes a 2017 study by Professor Keith Thompson that shows “child sexual abuse is not a sin that people confess to priests in the confessional. Those who counsel such predators tell us that sadly, many of them are secretive and manipulative and cannot comprehend the grave evil of their actions.”

At the same time, the idea that the government can insert itself into the intimate relationship between a person and God is an example of blatant disregard for the Church’s freedom of religion as guaranteed by the First Amendment.

Priests in the Archdiocese of Denver have been mandatory reporters of sexual abuse for years and I fully support this policy, along with the rigorous safe environment policies we have implemented. But allowing the state to intrude into the confessional cannot be accepted. I wholeheartedly agree with Bishop Michael Barber’s statement that, “Even if this bill passes, no priest may obey it. The protection of your right to confess to God and have your sins forgiven in total privacy must be protected. …I will go to jail before I will obey this attack on our religious freedom.”

Penitents should not have to fear confession, rather it should be a place where they encounter what Jesus described to St. Faustina as “the Tribunal of Mercy. There the greatest miracles take place [and] are incessantly repeated. To avail oneself of this miracle, it is not necessary to go on a great pilgrimage, or to carry out some external ceremony; it suffices to come with faith to the feet of My representative and to reveal to Him one’s misery, and the miracle of Divine Mercy will be fully demonstrated” (Diary of St. Faustina, #1448).

May God guide our legislators and our country in these times of difficulty and may he help us restore all people to their true dignity, which is inherently bestowed by the Creator and not by the government.