His Church. Our Experience.
Subscribe
HomeLocalJoin in novena to Our Lady Undoer of Knots
Local

Join in novena to Our Lady Undoer of Knots 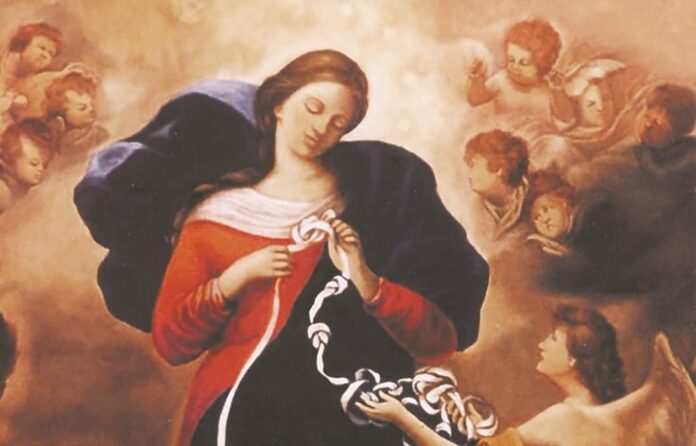 Archbishop Samuel Aquila encourages prayer warriors to join him in a nine-day devotion Sept. 28 through Oct. 6 with the intention of “undoing the knot of abortion” in Colorado and the United States. (Read the archbishop’s Sept. 17 Denver Catholic Register column “Our Lady, undoer of our abortion knot” here.)

History of ‘Mary Untier of Knots’
The devotion originated in Germany, inspired by story of a married man, Wolfgang Langenmantel, who sought counsel from Jesuit Father Jakob Rem to save his marriage. On Sept. 28, 1615, he brought the couple’s wedding ribbon—symbolizing the unbreakable bond of marriage—to the appointment. The priest raised it before an image of Our Lady of the Snows while symbolically untying knots. As he smoothed the ribbon, it became white as snow, which was taken as confirmation that their prayers had been heard, and indeed, the marriage was saved.

In 1700, the couple’s grandson commissioned a painting commemorating the event. It hangs in the Church of St. Peter am Perlach in Augsburg, Bavaria, Germany and is venerated as Mary Untier of Knots.

Father Jorge Bergoglio, now Pope Francis, discovered the devotion while studying in Germany, and brought it back to his native Argentina, where it remains popular, as well as throughout South America.

To pray the novena
Join in praying the novena as follows:
1) Begin by reading a short reflection written by a seminarian.
2) Make the sign of the cross.
3) Say the Prayer to Our Lady Undoer of Knots written by Cardinal Jorge Bergoglio/Pope Francis.
4) Pray an act of contrition.
5) Pray the first three decades of the rosary.
6) Read and reflect on the meditation of the day.
7) Pray the last two decades of the rosary.
8) Finish with the closing Prayer to Our Lady the Undoer of Knots.

For the daily reflections, prayers and meditations click here.