It’s All in the Surrender: A Lenten pastoral note from Archbishop Samuel J. Aquila 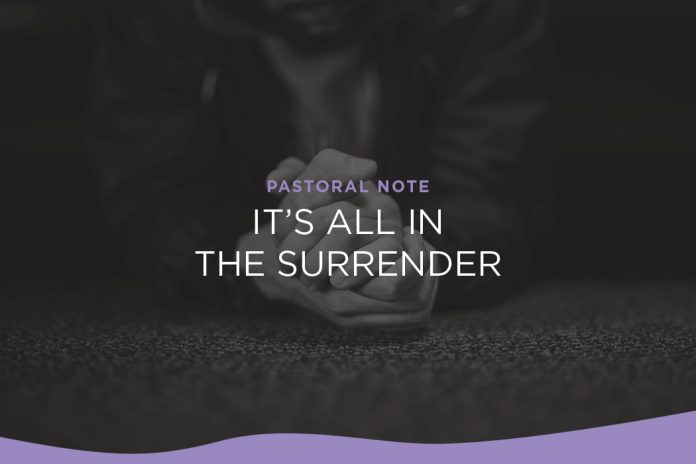 Several years ago, I was making a 30-day Ignatian silent retreat when a few days into the retreat I got a hankering for ice cream.

As I walked alone into an ice cream parlor, I noticed a young couple in front of me having an intense conversation while they ordered their ice cream. As I listened, I discovered they were discussing the Eucharist, and, specifically, Eucharistic adoration. This caught my attention. They did not recognize me as a bishop since I was not wearing clerics while on my retreat in the hot Omaha summer.

As we both walked down the sidewalk, I could continue to overhear their conversation. It became apparent that the woman was fascinated that her date went to adoration. He shared how he would go two or three times a week with friends; she was amazed. He then went on to describe how he and his friends would drive to adoration in total silence to prepare themselves. Baffled, she asked, “why would they do that?”

He stopped, and I stopped, pretending to be looking at some buildings. After thinking deeply, he then simply stated, “It is because we are going to meet the Lord, and we must be prepared to give ourselves to him. It is all in the surrender of ourselves to him.” My heart leapt with joy, and I wanted to cry out, “Young man, you are not far from the Kingdom of God!”

My providential encounter with that couple provided the theme, “it is all in the surrender,” for the rest of my retreat. The Father, in his unconditional love for me, provided an encounter for me that to this day is one of the most life-changing experiences I have had. The young man, taking his date out for ice cream, had no idea the gift that he gave me on that sweltering summer day.