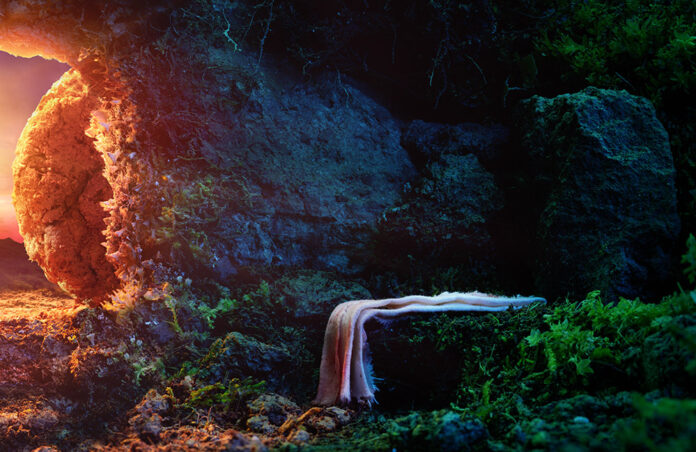 In the last edition of the Denver Catholic magazine, I began a three-part series on our story as Catholic Christians, the story of our identity and what we are called to do. With this current issue I will focus on how God chose to rescue us. Our story picks up after Adam and Eve’s fall from grace.

Satan knew the power and glory of God. He saw that men and women were destined to receive a share of that glory and he rebelled. So, aware of God’s power, the devil waited to see how he would respond to the fall of Adam and Eve, looking for an impressive rescue plan. Instead, God launched a secret counter assault. He came as a humble and defenseless child, born in a stable, in poverty, to the little-known Mary and Joseph.

It might seem like a stretch to talk about Jesus’ life and death in terms of waging battle, but this was not a strange idea for the early Church Fathers. Today we think of Jesus’ death on the cross as him showing us the love of the Father or as making atonement for our sins, but in the first centuries of the Church, Jesus’ mission was described as him going to war to save us.

St. Ephrem the Syrian described it in this way:

“Death had its own way when Our Lord went out from Jerusalem carrying his cross; but when, by a loud cry from that cross, he summoned the dead from the underworld, death was powerless to prevent it.

Death slew him by means of the body which he had assumed, but that same body proved to be the weapon with which he conquered death.  Concealed beneath the cloak of his manhood, his godhead engaged death in combat; but in slaying Our Lord, death itself was slain.  It was able to kill natural life but was itself killed by the life that is above the nature of man.”

“Just as the devil had poisoned the tree of knowledge and spoiled our nature by its taste, so too, in presuming to devour the Lord’s flesh he himself is corrupted and is completely destroyed by the power of the Godhead hidden in it.”

But what changes for us because Jesus conquered death? What does this mean for our story? His victory means that we have been rescued from the kingdom of darkness, and that Heaven is possible for us to enter. It means that death’s eternal grip on us has been broken and that we will rise again to new life. And it means that we can, with the power of his grace, break free from the enslavement of sin.

The reality of Jesus’ victory can seem hard to grasp, but the visions of numerous saints who experienced the internal anguish and utter isolation of hell bring it into sharper focus. In addition to these depictions, modern clinical research into near death experiences helps fill in the picture. One study quotes a man who was severely beaten and who recalled how he “suddenly was surrounded by total blackness, floating in nothing but black space, with no up, no down, left, or right…. What seemed like an eternity went by. I fully lived it in this misery. I was only allowed to think and reflect” (Distressing Near Death Experiences: The Basics, Missouri Medicine Journal, Nov.-Dec. 2014).

Jesus’ victory over death means that rather than being abandoned, you have been rescued. It means YOU matter, that you are loved and worth Jesus’ sacrifice and that he has given you a mission. His mission for us is to build the Kingdom of God on earth and to take it back from the evil one, relying on God’s love, power and grace that he wants to pour out on us.

In the May edition of the Denver Catholic, we will look more deeply at what our response to God’s love requires of us in return. In other words, how are we called by grace and the Holy Spirit to build and grow the Kingdom of God.

Thank you to all of those who read Our Apostolic Moment, my Lenten pastoral note (archden.org/our-apostolic-moment) and participated in the three invitations this Lent. To help us continue to journey with Jesus Christ through these challenging and blessed times, I will be releasing a digital resource that all can use to encounter Christ and pray their way through the Easter season. Visit denvercatholic.org/subscribe now so you don’t miss it!