This FAQ is intended to be a brief summary of the Independent Review and its published report specific to the Archdiocese of Denver. The full report and a more detailed FAQ are available at archden.org/promise.

What was the Independent Review?

Former U.S. Attorney Robert Troyer was given access to 70 years of diocesan files concerning the sexual abuse of minors by diocesan priests—including the so-called “secret archive” files—and the opportunity to interview survivors, priests, and other witnesses. His report included an analysis of the diocese’s policies related to preventing and responding to sexual abuse of minors; the dioceses’ compliance with Colorado law requiring the mandatory reporting to law enforcement of abuse allegations; and a list of all diocesan priests that are the subject of one or more substantiated allegation of sexual abuse of a minor since 1950.

Why did the Archdiocese agree to the Independent Review?

There were four goals: (1) To publicly acknowledge this history of sexual abuse, and in doing so provide a moment of justice for any survivor and encourage others to come forward; (2) To assure the Attorney General, public and members of the Archdiocese – clergy and laity – that no diocesan priest known to have sexually abused a minor is in active ministry; (3) To identify any needed improvements to our policies and procedures to ensure they are of the highest standard; (4) To allow the thousands of people who are working to make the Archdiocese a safe environment for children to see the progress of their work.

What did the Independent Review find for the Archdiocese of Denver?

The review identifies 21 diocesan and one extern priest who were responsible for 127 substantiated allegations of sexual abuse of a minor. For some context: within the Archdiocese of Denver, the most recent case was in 1998 and no substantiated allegations were found against any diocesan priest in active ministry. Nearly 90-percent of the known abuse happened more than 40 years ago (1950-1979 – see chart below). Over 60-percent of the abuse was committed by two former priests – H. Robert White and Leonard Abercrombie. And roughly 75-percent of the abuse was committed by four former priests – White, Abercrombie, Neil Hewitt and John Holloway – none of whom have been in ministry for the last 26 years. 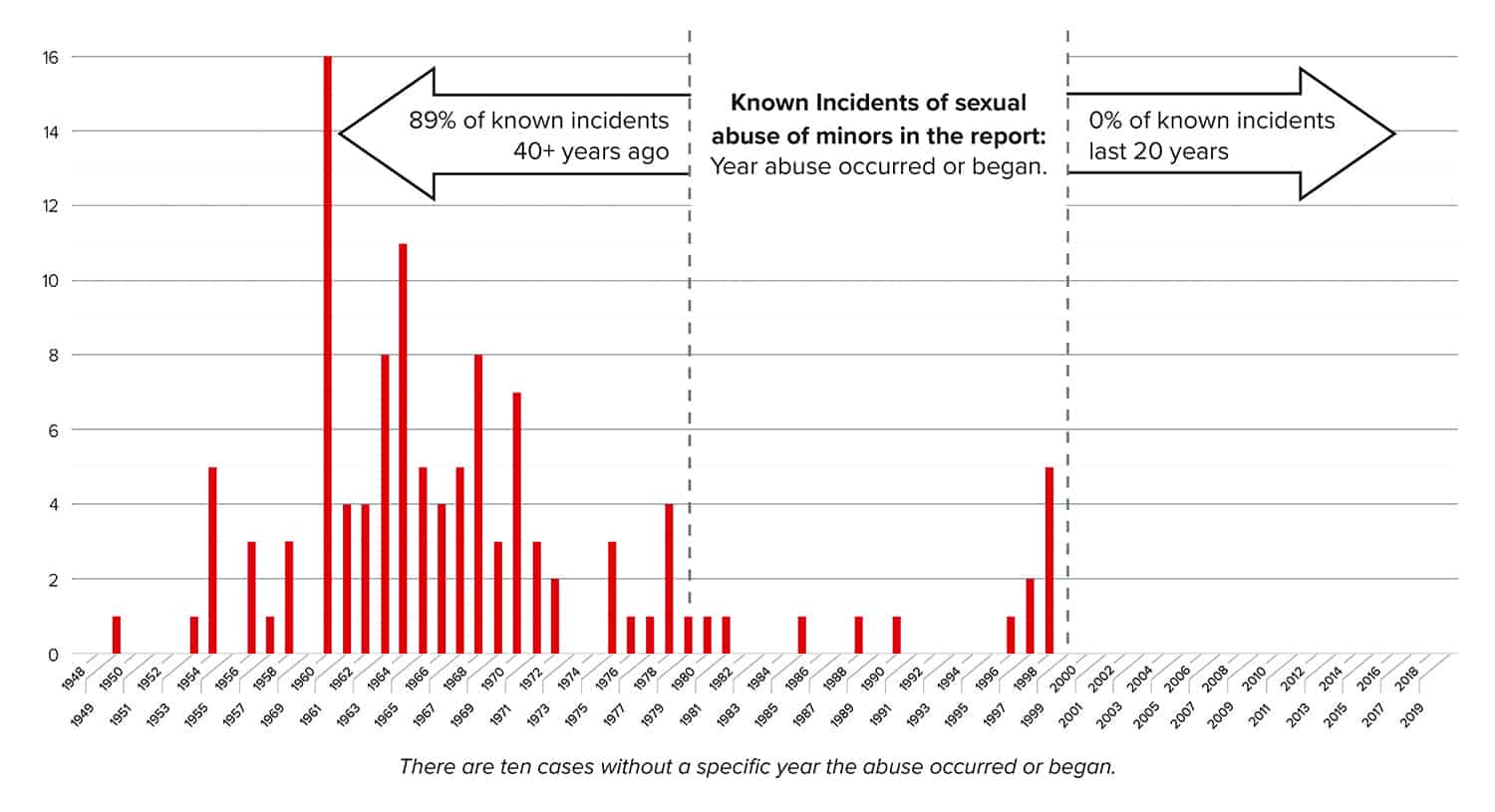 What was the scope of the Independent Review?

The review focused on all diocesan and extern priests who have served in the Archdiocese between 1950 and today. While religious order priests often serve in our parishes, they report to a different religious superior who maintains their files and handles allegations of misconduct.
What is the status of the priests named in the report?
Of the 22 priests, 15 of them are dead and none of the other seven are assigned in active ministry. The most recent substantiated allegation in the report was perpetrated by Timothy Evans in 1998. Evans has been laicized and remains in prison. More details in the FULL FAQ online.

Are my children safe in Catholic parishes or schools?

Yes. The policies and procedures that have been implemented and strengthened over the last three decades have shown to be effective. Every priest, deacon, employee and volunteer who works with children must pass a background check and attend safe-environment training to be educated on preventing, spotting and responding to potential abuse. We currently have 14,000 trained mandatory reporters, and every year approximately 22,000 children are taught how to keep themselves safe. We have also strengthened our seminary screening and formation process to better prepare our future priests. Constant ongoing vigilance to protect our children, however, is required.

Has the Church completely fixed the issue of clergy sexual abuse of minors?

No. While we take the absence of substantiated abuse by any diocesan priest in the last 20 years as a positive sign that we are meaningfully addressing the issue, we recognize that child sexual abuse is a pervasive problem in our society and that we must remain vigilant as a Church. The report is a stark reminder of what happened when the issue was not taken seriously.

The archdiocese will immediately work to implement the recommendations of the report, most of which deal with how we investigate historical allegations and respond to survivors who are now adults. To our faithful: we would encourage you to attend one of the safe environment training classes that are required for our priests, deacons, employees and volunteers who work with children. We would also encourage you to find ways to support your current priests, who far too often are judged as guilty by association. Finally, we should all continue to pray for the healing of everyone impacted by sexual abuse.