His Church. Our Experience.
Subscribe
HomeLocalIn the flesh: A doubting monk and the Eucharistic miracle in Lanciano
Local

In the flesh: A doubting monk and the Eucharistic miracle in Lanciano 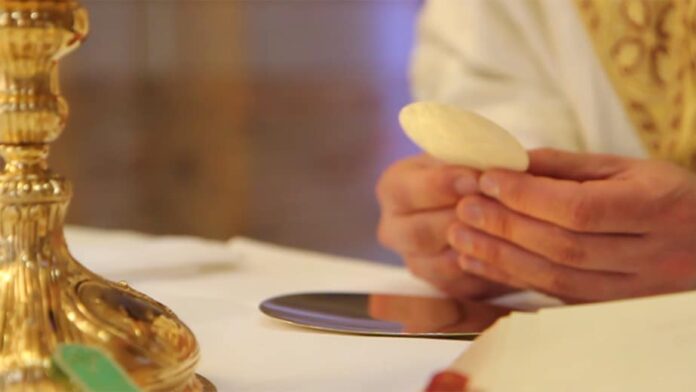 Eucharistic miracles are a fascinating phenomenon within the Church’s rich history. As with many concepts of the Catholic faith, they’re not easily understood, grasped or even accepted; they require a deep examination of one’s own faith and a deliberation of belief in Christ. However, Eucharistic miracles are great food for thought on Holy Thursday, when Catholics acknowledge the institution of the Eucharist, which in and of itself is one of the great mysteries, and miracles, of the Church.

“We’re asked to believe many things on faith,” said Richard Bernatchez, founder of Faith Based Communications and a member of the Real Presence Eucharistic Education and Adoration Association. “Eucharistic miracles serve as a reminder from Christ of his True Presence within the Blessed Sacrament in order to reinforce our faith.”

Bernatchez is local to Denver but travels around the country giving presentations about Eucharistic miracles and supplies an official, Vatican-authorized exhibit to supplement his presentations.

The Church teaches that in the sacrament of the Eucharist, the bread and wine become the body, soul, blood and divinity of Jesus Christ through a process called transubstantiation, which literally means that the very substance of which the bread and wine are composed changes into something different entirely; namely, the literal body and blood of Christ.

The Church teaches that this process is a mystery and not meant to be fully understood, and though the bread and wine still appear to be unchanged after the consecration, the Church is clear that this is not the case. As the Catechism of the Catholic Church states, “At the heart of the Eucharistic celebration are the bread and wine that, by the words of Christ and the invocation of the Holy Spirit, become Christ’s Body and Blood” (CCC 1333).

However, throughout history, there have been several documented cases of a consecrated host transforming into a real, living piece of flesh, and the wine becoming actual blood. These phenomenon are known as Eucharistic miracles.

Although the Church does not officially recognize Eucharistic miracles as part of its doctrine, it does not discourage the faithful from considering their authenticity as a matter of faith.

“Oftentimes, the initiating trigger of a Eucharistic miracle is a doubting priest,” Bernatchez said.

The earliest recorded Eucharistic miracle is also the most famous. In roughly 750 A.D., in the town of Lanciano, Italy, a Basilian monk celebrated Mass, but doubted the True Presence of Christ in the Eucharist.

During the consecration, the host transformed into live flesh, and the wine, into live blood. The blood coagulated into five walnut-sized globules, irregular and differing in size, while the flesh had the same dimensions as a large host used in Mass and appeared light brown in color.

Both the flesh and blood have remained perfectly preserved for twelve centuries and can be viewed in Lanciano to this day. That’s not all there is to the story, though.

In November 1970, Archbishop Pacifico Perantoni of Lanciano, with authorization from Rome, commissioned Dr. Odoardo Linoli, a professor of anatomy and pathological history and former head of the Laboratory of Pathological Anatomy at the Hospital of Arezzo, to conduct a full scientific analysis of the sacred species. He studied the specimen for five months and presented his findings on March 4, 1971.

He confirmed that the flesh and blood were of human origin. The blood was type AB, which he noted was “particular because it has the characteristics of a man who was born and lived in the Middle East regions.”

Perhaps most fascinating of all, though, were Dr. Linoli’s discoveries regarding the flesh. He concluded that the piece of flesh consisted of cardiac tissue; that is, the sacred species was, in fact, a piece of a human heart. The tissue contained within was consistent with that of myocardium, endocardium, the vagus nerve and the left ventricle of the heart.

Dr. Linoli published his findings in Italian medical publication Quaderni Scalvo di Diagnostica Clinica e di Laboratori in 1971. In 1973, a scientific commission appointed by the Higher Council of the World Health Organization (WHO) was tasked with verifying Dr. Linoli’s conclusions. The work was carried out over 15 months, and they confirmed his findings were indeed accurate.

Various online sources said that the WHO published an extract of their research in December of 1976, stating that “science, aware of its limits, stops in front of impossibility of giving an explanation.”