In need of a miracle: Catholic school credits Julia Greeley’s intercession for completion of new playground 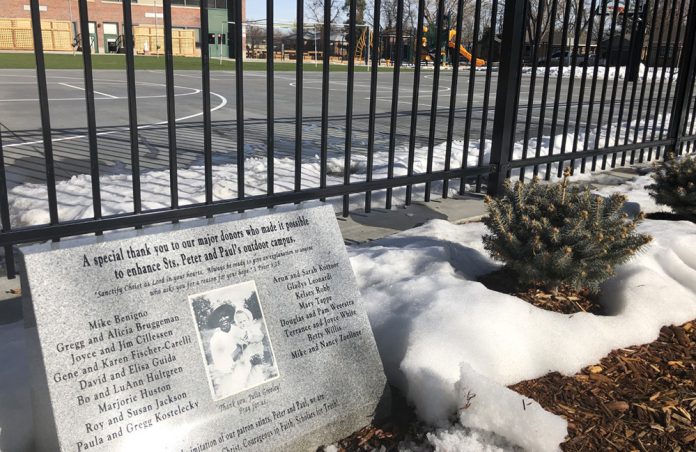 Sts. Peter and Paul Catholic STEM School in Wheat Ridge has long been in need of a safer place for their students to play.  Built in the 1960’s, the extended church parking lot doubled as the school playground.  As the many layers of asphalt cracked over the years, the surface became a hazardous occasion of daily skinned elbows and knees.  The beautiful locust trees aged and began growing terrible three-inch thorns which punctured soccer balls and had to regularly be confiscated from students.  The playground area was unfenced, and teachers had to practice extraordinary vigilance over the students each day.

Over the course of 15 years, multiple principals at Sts. Peter and Paul School tried to remedy the situation but the project cost was simply prohibitive given the school demographics.  In the fall of 2019, Principal Sister Faustina, a Carmelite Sister of the Most Sacred Heart of Los Angeles, gathered another committee to discuss a design for the playground area and the long-term hopes of funding the project.  In January of 2020, the possibility of significant grant funding suddenly surfaced and the committee ardently turned to prayer for a miracle.

Which saint would help a small and poor school make the much-needed outdoor area improvements?  The school community turned to Denver’s Servant of God Julia Greeley, who was well known for her deep devotion to the Sacred Heart of Jesus, for her loving service of the poor and for her incredible love of children.  Julia was born into slavery in Missouri between 1833 and 1848.  Freed by Missouri’s Emancipation Act in 1865, Julia moved to Denver to find work.  She lovingly assisted poor families in her neighborhood and often did most of her charitable work at night to avoid embarrassing the people she helped.  Julia entered the Catholic Church at Sacred Heart Parish in Denver in 1880, and became a most enthusiastic promoter of devotion to the Sacred Heart of Jesus until her death in 1918.

In February 2020, all the Sts. Peter and Paul students and teachers began an audacious novena to Julia asking for full and immediate funding for the project, which at that time was estimated to cost $650,000.  The Carmelite Sisters serving at Sts. Peter and Paul made a pilgrimage to the Denver Cathedral to make their request in front of her tomb and stopped to pray at Julia’s parish, Sacred Heart in Denver.

Sadly, this grant funding possibility fell through a few weeks later.  God’s providential timing was evident as the pandemic put a halt to much of the world just two weeks later.

In January of 2021, the Holy Spirit began to hover over this project once again.  Although working very hard to maintain in-person learning in midst of the health crisis and social unrest, school and community leadership discerned that a window of opportunity seemed to be opening to complete the project.  The paperwork side of running a capital campaign began and a zealous committee of community members came together to move the initiative forward.  At each committee meeting, Julia’s intercession was invoked.  Miraculously, within just six weeks, donors had pledged nearly 75% of the anticipated expenses for the ‘East Campus Development’ project.  Committees worked diligently to raise the remaining funds, finalize the project design and prepare for construction.  Nearly 1,000 people donated to the project and it was fully funded when construction began in June 2021, just six months after fundraising efforts began.  The school community had never raised even close to that amount, and this was truly a miracle!

Sts. Peter and Paul students are now blessed with a safe and beautiful outdoor area complete with a Marian grotto, basketball court, volleyball court and new play equipment, including the children’s favorite slides and swings.  The area also includes an exciting outdoor STEM classroom equipped with standing tables, amphitheater, greenhouse, and garden boxes for each class.  The school community is joyfully celebrating that its campus now truly reflects the beauty and strength of their mission.

In gratitude for Julia’s powerful and miraculous intercession, the committee recognized her on our major donor plaque and attended a special Mass this June in her honor.  May this holy Servant of God continue to pray for Sts. Peter and Paul Catholic STEM School and all our Catholic Schools!

Sts. Peter and Paul Catholic STEM school is located in Wheat Ridge, CO. In the past five years, the school has development a dynamic Catholic STEM curriculum and experienced extraordinary growth in enrollment. Applications for 2022-2023 are now open. Visit sppscatholic.com for more information.