Ignore God’s goodness at your own risk 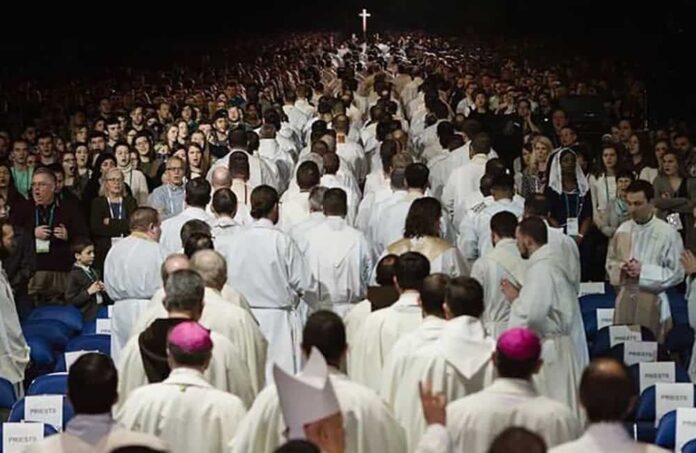 In these times of trial, it is easy to forget or overlook the stories of faith, joy and vibrant life that are a part of the fabric of our Church. The Psalms remind us, it is essential to “call to mind the deeds of the Lord” and to “remember his wonders” (Psalm 77:11), since failing to do so can lead to despair and a hardened heart. To help us all celebrate God’s goodness, I would like to recall a few moments where I’ve seen it recently.

As 2019 began, I had the privilege to see and be a part of one of God’s wonders. After spending several days on retreat with my fellow bishops at Mundelein Seminary, I made the short trip from Chicago to Indianapolis, where the Fellowship of Catholic University Students (FOCUS) was holding its biennial SEEK conference for students wanting to encounter Jesus and seek the truth.

It’s hard to describe the energy and enthusiasm that the more than 17,000 students from 626 campuses brought to the event, but a few moments from the gathering might give you a glimpse of the experience.

Saturday night, the vast conference room was filled with young people adoring Jesus in the Blessed Sacrament and coming to him for healing in reconciliation. In the words of Amy Gasper, who spoke to The Criterion, “You get to see how hungry people are for the Lord. It makes my heart leap for joy.”

I had the privilege of hearing confessions for over two hours and seeing the healing Jesus brought to young people as they heard the words of absolution pronounced over them. They experienced the mercy and tenderness of Jesus welcoming them home and the great joy in heaven over one repentant sinner.

During the Mass on Sunday morning, the Solemnity of the Epiphany, I encouraged the young people in attendance to allow the grace of their relationship with Christ, the light of Christ in them, to overcome the darkness that the world and the Church are experiencing. What I said in my homily applies to everyone: “Jesus can heal any wound. He can restore any disorder. He can bring light into darkness.”  We must put our faith, our full trust and confidence in Jesus!

A few days later, I spoke from the west steps of the Colorado Capitol to a crowd of energetic, joyful pro-lifers from northern Colorado and beyond who came to stand up for the unborn at the Celebrate Life March. Despite the snow storm just a day before, thousands of people cheered the witness of the McGarrity family, who have eight children, four of them with Down Syndrome. The crowd cheered their generous embrace of life and laughed along with the excited shouts from their kids.

A short while later, downtown Denver witnessed doctors, nurses, moms, dads, children, a mariachi band, Native American dancers and so many others marching through its streets to publicly support life at every stage, from conception to natural death.

Then on Friday, Jan. 18, the nation witnessed what organizers called the largest pro-life March for Life in recent memory. By and large, most of the people marching were from Catholic parishes, schools, universities and apostolates. The march had a strong presence of young people, a palpable atmosphere of love, a sense of unity and hope.

The message of hope was also present in Pope Francis’ words during the Jan. 16 General Audience, in which he reflected on the Lord’s Prayer and the fact that God’s love for us is not impacted by our sins and shortcomings. “God is looking for you, even if you do not seek Him,” he said to the crowd. “God loves you, even if you have forgotten about Him. God sees beauty in you, even if you think you have squandered all your talents in vain.”

We need to adopt God’s view of ourselves and the Church, asking him for the grace to see and love as he does. The Holy Spirit is at work in the Church, bringing healing to those in darkness and encouraging people to shine the light of Christ in the world. The evil one would like us to wallow in despair and convince us that things are hopeless.  Place your hope in Jesus and turn to him for healing. You will not be disappointed, and then you will become the light of the world!