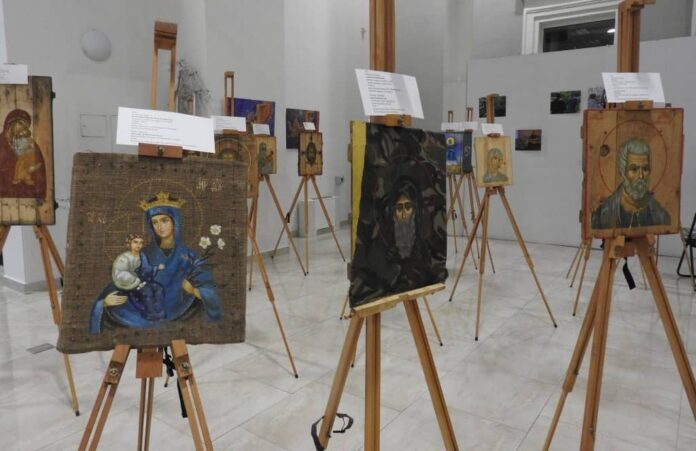 Throughout the 20th century — the greatest period of martyrdom in history — persecuted Christians used the dross of this world to make religious artifacts.

Rosaries were constructed from bits and pieces of this-and-that. Crucifixes and Mass vessels were forged from scrap metal. Bibles and missals were handwritten on scraps of paper from memory. The Venerable Francis Xavier Nguyen Van Thuan wore his pectoral cross suspended from a chain he made from the barbed wire of the Vietnamese communist concentration camp in which he was confined for years. Many such relics are displayed at the shrine of the New Martyrs in the Basilica of St. Bartholomew on Rome’s Tiber Island — a place where the usual bustle and buzz of Roman churches is replaced by a hushed reverence, as if even the least well-catechized visitors realize that they’re in the supernatural presence of great witnesses.

This deeply Catholic instinct for transforming what is dead or death-dealing into something life-affirming and life-giving continues today in Ukraine, through a remarkable project known as “The Icons on Ammo Boxes.” I discovered it in Philadelphia in early June, while speaking at the celebrations marking the enthronement of my old friend Borys Gudziak as Metropolitan of the Ukrainian Catholic archeparchy of Philadelphia. During my remarks (which can be found in full here, I spoke of Eastern Catholicism’s “gift of iconography” to the universal Church. Whatever impact my words may have had, however, it was likely less than the thoughts and emotions stirred in the Cathedral of the Immaculate Conception by an extraordinary display around the cathedral’s perimeter: icons written (painted) on the wooden lids of ammunition boxes by a husband-and wife team of two young Ukrainian artists, Sofia Atlantova and Oleksandr Klymenko.

Icons written on wood using various types of paint are nothing new, of course; many of the greatest icons in the history of Christian art were written that way. Oleksandr Klymenko’s brilliant idea was to use a different kind of wood: not a polished and treated panel, but the rough-hewn tops or bottoms of the boxes in bullets, grenades, and artillery shells were once stored. The icons he and Sofia Atlantova wrote, and which were displayed in Philadelphia, included wood from ammo boxes dating back to Soviet times. But they also included newer wood panels recycled from the battlefront of eastern Ukraine, where a Russian-led and Russian-financed war has been underway since 2014, taking over 10,000 lives, ruining the local economy, and displacing hundreds of thousands of people.

The icons turn trash, redolent of death, into life-affirming art in several ways. First, by their very existence: for they transform materials that stored munitions intended to kill and maim into celebrations of faith and life. Icons are not “representative” art in the western sense; an icon does not say, “This is what Christ looked like” the way Rembrandt’s famous self-portrait says, “This is what I, Rembrandt, looked like.” Rather, icons are one of those permeable borders or membranes between this world and the supernatural world; icons are intended to “make present” that which they depict. Icons are thus an invitation to leave the death-dealing world and enter the world of resurrected life, the world of divine life — and to do so through the medium of an ammunition box drives the point home in an especially powerful way.

Second, through the sale of Sofia Atlantova’s and Oleksandr Klymenko’s work, the “Icons in Ammo Boxes” project supports the Pirogov First Volunteer Mobile Hospital, which brings medical professionals into the warzone of eastern Ukraine to treat wounded soldiers and civilians. Since its inception, the mobile hospital has served some 50,000 patients, saving or repairing many lives broken by Russian aggression.

Archimandrite Cyril Hovorun, who teaches at Loyola Marymount University in Los Angeles, has described the “Icons in Ammo Boxes” project as a kind of transfiguration: “The icons…demonstrate how violence and pain can be transfigured to peace and relief, and actually contribute to this transformation through the work of doctors.” That image strikes me as exactly right. As the transfigured glory of Jesus on Mt. Tabor opens up a vision of human transformation in the Kingdom of God, where “death shall be no more…” (Revelation 21:4), so these icons suggest the transformation of the lethal into the life-giving, even as they support healing here and now.

More about this remarkable mission, and the icons that support it, can be found at http://www.medbat.org.ua/en/buy-icon-save-a-life.