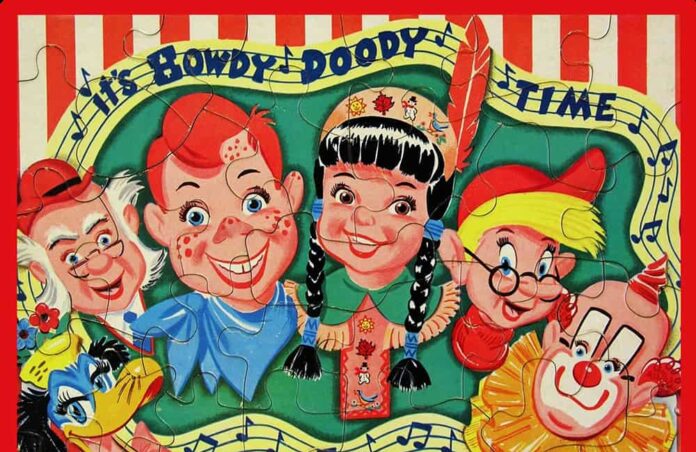 Three or four times each month, Father X (as I’ll call him here) celebrates the noontime daily Mass I regularly attend. I’m grateful for his homilies, which are almost always thoughtful. Thus in a recent commentary on Jesus’s debate with the Sadducees over the resurrection of the dead, Father X gave a lucid and moving explanation of the “communion of saints” and how it functions in our Christian lives.

The problem is not Father X’s preaching. The problem is – if you’ll permit me an AmChurch neologism – Father X’s “presidential style.” And then, boys and girls, it’s Howdy Doody Time all over again.

In his liturgical formation, Father X evidently didn’t get the short memo that reads, “Do the red and say the black”: that is, follow the rubrics in the Missal and don’t mess around with the liturgical texts. Or perhaps Father X imagines himself a better stylist than those who translated the third edition of the Roman Missal into English. But whatever the causality, Father X can’t seem to help himself – the temptation to jolly things up is an itch that has to be scratched.

Thus the Gospel is always announced by “A reading from the Good News as proclaimed by St. —-.” At the consecration, the institution narrative is changed so that the Lord passes the bread and wine rather than gives it. “The Lord be with you” is frequently prefaced by a “My sisters and brothers….”, with an emphasis on the “with” that rings up – you guessed it – the Howdy Doody Show and its opening jingle.

But Father X doesn’t limit his rhetorical and stylistic assaults on the liturgy to Fifties’ TV re-runs. His invitation to “Lift up your HEARTS!” (the last word zoomed so that it’s almost shouted) calls to mind an ecstatic radio announcer informing his Bay Area listeners that Steph Curry has won the game again by draining a buzzer-beater from six feet behind the three-point line.

The Mass is the Mass, and we may thank God for the settled theological principle of ex opere operato, which assures us that God’s grace acts through earthen vessels, even priests who defy the rubrics and the proprieties. But Father X’s insistence on turning parts of the Mass into the children’s hour bespeaks several problems.

In the first instance, it suggests that the priest-celebrant is the master of the divine liturgy rather than its servant. In this case, that mastery too often turns Father X into a kind of ringmaster whose verbal antics, presumably intended to make the Mass more user-friendly, are a distraction from that toward which the Church’s worship aims, according to the teaching of the Second Vatican Council: “The liturgy daily builds up those who are in the Church, making of them a holy temple of the Lord, a dwelling-place for God in the Spirit, to the mature measure of the fullness of Christ” (Constitution on the Sacred Liturgy, 2). Howdy Doody and Christian maturity do not go together.

Secondly, the jollying-up-by-dumbing-down of the liturgy bespeaks a clericalism that doesn’t trust the lay faithful to “get it” without bells and whistles. I’m sorry, but that lack of trust is offensive. The “full, conscious, and active participation in liturgical celebrations…to which the Christian people, ‘ a chosen race, a royal priesthood, a holy nation, a redeemed people’ [1 Peter 2.9, 4-5] have a right and obligation by reason of their baptism” (Constitution on the Sacred Liturgy, 14) is not advanced when those Christian people are treated as if they were dimwits, or five-year olds with short attention spans.

There has been considerable progress made in the reform of the liturgical reform, not least by the restoration of sacral language to the Missal. As Cardinal Robert Sarah, prefect of the Vatican’s Congregation for Divine Worship, reminds us, recovering a sense of the liturgy’s kingdom-dimension, its anticipation of the Lord’s return in glory, is the next important step. Taking that step requires celebrating the liturgy as if it really were a foretaste of the Wedding Feast of the Lamb described in Revelation 19, not a knock-off of the Howdy Doody Show.