His Church. Our Experience.
Subscribe
HomeLocalLocal parishes lend a helping hand in times of need and crisis
LocalParish News 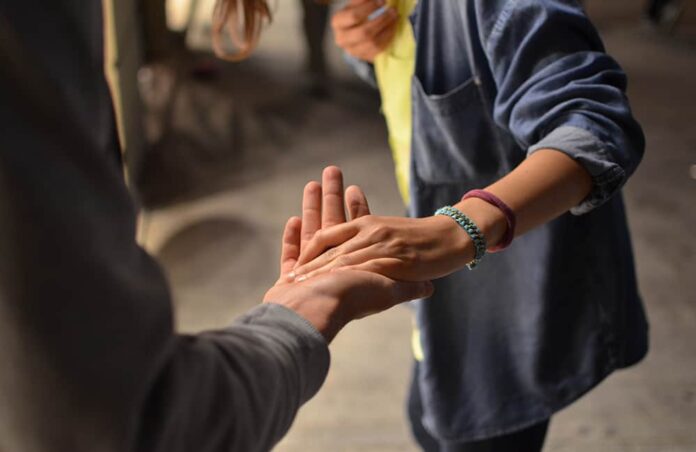 There is no doubt that it is more rewarding to give than to receive; to help than to be helped. Reaching out and helping others not only changes the life of those who receive the support, but also those who open their hearts to do an act of kindness.

Often, people may believe that they’re not in a financial position to help anyone, and therefore cannot help in any sort of tangible war. However, there are many other ways to help our neighbor besides financially. Parishes and their many ministries often serve as a catalyst for loving our neighbors. There is always something we can do for our brothers and sisters and to bless those around us; we just need a willing and open heart.

After seeing the great need to “equip saints for the work of ministry” (Eph 4:12), Dr. Haugh decided to help congregations coach their members to serve all those struggling with a variety of life difficulties, ranging from the loss of a loved one to financial needs. This how Stephen Ministers, or caregivers, were formed. They are lay congregation members trained to provide one-to-one Christ-centered care.

Marlene Julian has served as a caregiver for the past 13 years and is currently the ministry leader for Saint John XXIII Catholic Church in Fort Collins. After experiencing the loss of her husband, Julian felt the need to help other people, not only financially, but emotionally. Through her friends from the parish, she heard about the Stephen Ministry and decided to attend one of the courses that was about to begin.

“We want to provide them a compassionate face and confidential caregiving… we recognize that God is the cure giver and we are the caregivers,” said Julian. “We get to witness God’s work in people’s lives in amazing ways. We’re there to serve our parishes and anybody that needs help with any kind of a problem. It could be family challenges, hospitalization or illness, faith issues, financial difficulties, etc.

I’m amazed at how brave people are and how courageous it is for somebody to reach out to a complete stranger and share what’s going on in their life, then we get to witness God work.

“Being a Stephen minister has added so much to my life,“ she added. “It touches my heart every time I meet somebody. I’m amazed at how brave people are and how courageous it is for somebody to reach out to a complete stranger and share what’s going on in their life, then we get to witness God work. My faith in these last 13 years has just grown so much.”

The Stephen Ministry not only recruits its caregivers to help as volunteers, it also guides and prepares them so that when they meet their care receiver, they know how to listen, pay attention to their needs, and guide those who are going through difficulties in life. To be part of the ministry, it is necessary to complete 50 hours of training, where various topics are taught, ranging from ‘grief ministry skills’ to how to recognize when an individual needs additional professional help.

Among the numerous services that the ministry offers, its caregivers are trained to support people who are going through illness, family changes, depression, death of a loved one, divorce, loss of employment, financial difficulties, questions of faith, among others. Caregivers meet with people in need as often as necessary to provide emotional support, at no cost.

Liz Hollowell, leader of the Stephen Ministry at St. Elizabeth Ann Seton Catholic Church in Fort Collins, knows that the work she does in her ministry is just God working through her.

“I just can’t tell you how much it has changed my life,” said Hollowell. “With my very first care receiver I remember she said to me, ‘You’ve helped me so much!’ and I thought ‘But I didn’t do anything.’ It’s really the Holy Spirit working through you, listening, and letting them talk. Sometimes it’s easier to talk to a stranger.”

For more information on the Stephen Ministry, visit: www.stephenministries.org.

Parishes are also there to help with some of the more mundane yet still pressing needs that people may have. Robert Fisher is in charge of the Social Ministry office at Holy Ghost Parish in Denver, and much of what he does is help Colorado residents get essential paperwork and identification; things that are a necessary part of everyday life.

“Today, I’m primarily known around the city for helping with identification,” Fisher told the Denver Catholic. “So if they need a Colorado state I.D. or their license, I can pay for those through donations. If they’ve had one before, it’s pretty easy to get another one, and if they haven’t then we help them getting the other documents, too. The other thing we’re known for is birth certificates. I’m one of the few that does out-of-state birth certificates.

“I’ve also just recently started helping with Social Security cards because they’re not doing in-person [applications],” he continued. “They’re now doing applications through the mail, so I’m able to do that with them, just fill it out and mail it in for them.”

Among the other services Fisher provides with Holy Ghost’s social ministry office, he helps newly-employed folks get the proper tools they need to do their job and assists with prescription medication payments.

“[For] people who have a job and can show it or prove it and just need a little bit of tools to help them perform the job, I can help pay for those,” he said. “And I can [help] pay for medication for individuals if they can provide proof that it’s prescribed.”

While these services may not seem like much and perhaps even unusual for a parish to offer, they’re very helpful for people who have moved to Colorado from out of state, whom Fisher said make up most folks seeking his assistance.

“That’s probably the biggest group that I get that need help, is those that have moved in,” Fisher explained.

Another staple of the ministry is the sandwich line and serving other meals to those in need. Free meals are not too difficult to come by in Denver, Fisher said, but he recalled that when the COVID pandemic first hit, he did notice an increase in the demand and the amount of people coming to Holy Ghost for a meal. This is partly because due to social distancing protocols, some of the usual places had to temporarily shut down.

“Once COVID hit, a lot of places stopped and we were one of the few that kept going,” Fisher said. “We were able to change some things around and had guys distance six feet. And we were serving what was the most that I’ve seen and heard about, which is about 100-150 a day. The average now is 30 to 40 a day, and before COVID, the average was 60 to 70.”

Before working for Holy Ghost, Fisher was a missionary for Christ in the City, where he did outreach to the homeless and others in need. He is grateful for the opportunity to continue helping those in need and forming relationships with them, which is the best part of his job.

“I think I just find the most joy hearing from them and talking with them and just sitting with them, especially when they don’t need something, because that’s when they’re just searching and they’re open,” he said. “They’re open to sit down and share or talk. We can just have a conversation. That’s what I love the most.”

When the COVID pandemic hit in March and the world shut down in the months that followed, Father Peter Wojda noticed something very peculiar: Nobody seemed to need any help.

“It wasn’t exactly what I expected,” Father Wojda, pastor of the Catholic parishes of Grand and Jackson Counties, told the Denver Catholic near the end of October. “I set up a charity account and I let people know so they could start donating to it because I figured we’d have people that were losing jobs and whatnot.”

However, a grand total of just two people came seeking help over the past eight months.

“I had one person come looking for a hotel room, and they’re not a parishioner, they were just kind of passing through, and then someone else passing through, when their car broke down, one of our parishioners sold them a fantastic vehicle for dirt cheap and we helped out with that as well. That was it in the last eight months.”

A similar thing happened when the East Troublesome Fire hit Grand County and forced the residents of Granby and the surrounding mountain towns to evacuate. The parishes went on “standby,” so to speak, and were available to help with whatever was needed.

“I know of three parishioners that lost homes,” Father Wojda said. “As far as I know, all of our parishioners evacuated safely and found housing with family or friends. I know there are people who escaped with just the clothes they were wearing, but they didn’t come our way. I have been asking around but everyone I talk to have been doing relatively well. The community in the county was amazing, with lots of people helping other to evacuate homes and ranches.”

Despite many of the material needs in the wake of the fire being met, Father Wojda said the parishioners up in Grand and Jackson counties found other ways to help, especially on the nights when the temperatures dipped to below freezing.

“The sheriff asked for help from some of the tradespeople like plumbers and stuff and he got 40 or 50 people, including a couple of our parishioners, to go up with his officers to try to shut off water in the homes to prevent further damage to homes that may have actually survived,” Father Wojda said.

It’s been impressive to see the willingness of his parishioners and others from the local community to step up and help, Father Wojda said.

“[There’s been] so many people just saying, ‘oh, I can do that,’ and showing up, not getting paid or anything, but [they] just recognized this is needed,” he said. “I’ve seen that in many different ways. In that sense, it’s been really good … [it’s] one of those things where I feel like it’s almost a shame that we need these big crises and tragedies for us to become who we’re supposed to be. But it’s beautiful.”

Father Wojda expects the most pressing needs to become more apparent in the aftermath of the fires. Until then, the parishes remain on “standby,” ready and willing to help however they can.

“The more difficult part will be working with the people who lost their homes, next week, next month… that kind of thing,” Father Wojda concluded. “In my mind, that’s going to be where we are doing more. We’ve been getting a list of people to call and we’ll be trying to keep in touch with them and taking more initiative in that way.”

Rocio Madera and Aaron Lambert contributed to this report.